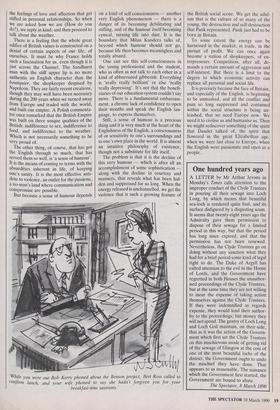 A LETTER by Mr Arthur Jevons in Monday's Times calls attention to the improper conduct of the Clyde Trustees in pouring all their sewage into Loch Long, by which means that beautiful sea-loch is rendered quite foul, and its surface disfigured by a disgusting scum. It seems that twenty-eight years ago the Admiralty gave them permission to dispose of their sewage for a limited period in this way, but that the period has long since expired, and that the permission has not been renewed. Nevertheless, the Clyde Trustees go on doing without any sanction what they had for a brief period some kind of legal right to do. The Duke of Argyll has called attention to the evil in the House of Lords, and the Government have regretted in both Houses the unauthor- ised proceedings of the Clyde Trustees, but at the same time they are not willing to incur the expense of taking action themselves against the Clyde Trustees. If they were indemnified as regards expense, they would lend their author- ity to the proceedings; but money they will not spend. The gentry of Loch Long and Loch Goil maintain, on their side, that as it was the action of the Govern- ment which first set the Clyde Trustees on this mischievous mode of getting rid of the sewage of Glasgow at the cost of one of the most beautiful lochs of the district, the Government ought to undo the mischief they have done. That appears to us reasonable. The nuisance which the Government first started, the Government are bound to abate.