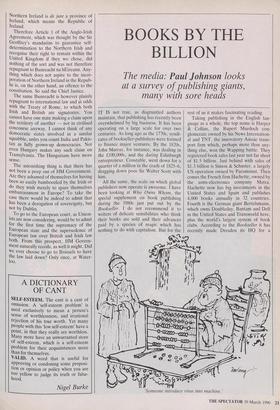 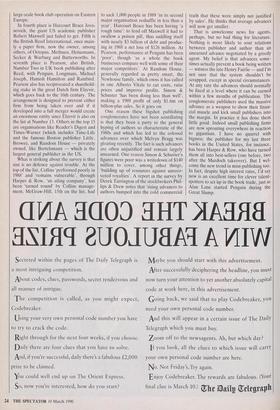 BOOKS BY THE BILLION

at a survey of publishing giants, many with sore heads

IT IS not true, as disgruntled authors maintain, that publishing has recently been overwhelmed by big business. It has been operating on a large scale for over two centuries. As long ago as the 1770s, syndi- cates of bookseller-publishers were formed to finance major ventures. By the 1820s, John Murray, for instance, was dealing in the f100,000s, and the daring Edinburgh entrepreneur, Constable, went down for a quarter of a million in the crash of 1825-6, dragging down poor Sir Walter Scott with him.

All the same, the scale on which global publishers now operate is awesome. I have been looking at Who Owns Whom, the special supplement on book publishing during the 1980s just put out by the Bookseller. I do not recommend it to writers of delicate sensibilities who think their books are sold and their advances paid by a species of magic which has nothing to do with capitalism. But for the

rest of us it makes fascinating reading.

Taking publishing in the English lan- guage as a whole, the top name is Harper & Collins, the Rupert Murdoch con- glomerate owned by his News Internation- al and TNT, the innovatory Aussie trans- port firm which, perhaps more than any- thing else, won the Wapping battle. They registered book sales last year not far short of $1.5 billion. Just behind with sales of $1.3 billion is Simon & Schuster, a largely US operation owned by Paramount. Then comes the French firm Hachette, owned by the arms-electronics company Matra. Hachette now has big investments in the United States and Spain and publishes 4,000 books annually in 32 countries. Fourth is the German giant Bertelsmann, which owns Doubleday, Bantam and Dell in the United States and Transworld here, plus the world's largest system of book clubs. According to the Bookseller it has recently made Dresden its HQ for a 'Someone introduce virus into machine.' large-scale book club operation on Eastern Europe.

In fourth place is Harcourt Brace Jova- novich, the giant US academic publisher Robert Maxwell just failed to get. Fifth is the British Reed International, once main- ly a paper firm, now the owner, among others, of Octopus, Methuen, Heinemann, Secker & Warburg and Butterworths. In seventh place is Pearson, also British, Number Two in UK book publishing after Reed, with Penguin, Longmans, Michael Joseph, Hamish Hamilton and Rainbird. Pearson also has reciprocated a sharehold- ing stake in the great Dutch firm Elzevir, which goes back to the 16th century. The arrangement is designed to prevent either firm from being taken over and if it developed into a full merger would create an enormous entity since Elzevir is also on the list at Number 13. Others in the top 15 are organisations like Reader's Digest and Times-Warner (which includes Time-Life and the famous Boston publisher Little, Brown), and Random House — privately owned, like Bertelsmann — which is the largest general publisher in the US.

What is striking about the survey is that size is no defence against trouble. At the top of the list, Collins 'performed poorly in 1988' and 'remains vulnerable', through Harper & Row, 'an ailing company', has been 'turned round' by Collins manage- ment. McGraw-Hill, 15th on the list, had

to sack 1,000 people in 1989 'in its second major organisation reshuffle in less than a year'. Harcourt Brace has been having 'a rough time': to fend off Maxwell it had to swallow a poison pill, thus saddling itself with nearly $3 billion of debt and produc- ing in 1988 a net loss of $126 million. At Pearson, performance at Penguin has been 'poor', though 'as a whole the book businesses compare well with some of their major competitors'. At Random House, generally regarded as pretty smart, the Newhouse family, which owns it has called in one Alberto Vitale to cut costs, raise prices and improve profits. Simon & Schuster 'has been doing less than well', making a 1989 profit of only $1.6m on billion-plus sales. So it goes on.

One reason these bigshot publishing conglomerates have not been scintillating is that they been a party to the general hyping of authors so characteristic of the 1980s and which has led to the colossal advances over which Melvyn Bragg was .gloating recently. The fact is such advances are often unjustified and remain largely unearned. One reason Simon & Schuster's figures were poor was a writedown of $140 million to cover, among other things, 'building up of resources against unreco- vered royalties'. A report in the survey by Derek Tarrington of the stockbrokers Phil- lips & Drew notes that 'rising advances to authors bumped into the cold commercial truth that these were simply not justified by sales'. lie thinks that average advances will now get smaller.

That is unwelcome news for agents, perhaps, but no bad thing for literature. Nothing is more likely to sour relations between publisher and author than an unearned advance negotiated by a greedy agent. My belief is that advances some- times actually prevent a book being written — witness the late Henry Fairlie — and I'm not sure that the system shouldn't be scrapped, except in special circumstances. At any rate the advances should normally be fixed at a level where it can be earned within a few months of publication. The conglomerate publishers used the massive advance as a weapon to show their finan- cial muscle and kick small publishers into the margin. In practice it has done them little good. Indeed small publishing firms are now sprouting everywhere in reaction to gigantism. I have no quarrel with bigness: the publisher for my last three books in the United States, for instance, has been Harper & Row, who have turned them all into best-sellers (one before, two after the Murdoch takeover). But I wel- come the new trend in mini-publishing too. In fact, despite high interest rates, I'd say now is an excellent time for clever talent- spotters to set lip in the book trade, just as Alan Lane started Penguin during the Great Slump.