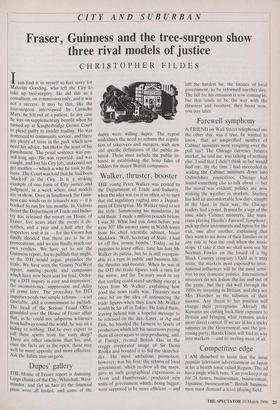 THE young Peter Walker was posted to the Department of Trade and Industry, when the idea was (as it so often is) to turn that old regulatory ragbag into a Depart- ment of Enterprise. Mr Walker tried to set the style. Summoning his mandarins, he told them: 'I made a million pounds before I was 30. What had you done before you were 30?' His answer came in Welsh tones from his chief scientific adviser, Ieuan Maddock: 'Well, Secretary of State, I had let off five atomic bombs.' Today, as he prepares to leave office, time has lent Mr Walker its patina, but he is still recognis- able as a type in public and business life: the thruster and booster. When he was at the DTI the trade figures took a turn for the worse, and the Treasury used to say that sterling could stand anything except a boost from Mr Walker, explaining how good the news really was. Treasury men once hit on the idea of announcing the trade figures when they knew Mr Walker would be far off in Tokyo. He foiled them, leaving behind him a hopeful message to be released on the day. Later, at Ag and Fish, he boosted the farmers to levels of production which left his successors paying them all over again to stop producing, and, at Energy, created British Gas in the craggy corporatist image of Sir Denis Rooke and boosted it to Sid the sharehol- der. His most ambitious promotion, however, was his first: the reform of local government, which re-drew all the maps, gave us such geographical expressions as Avon and Humberside, produced new units of government which, being bigger, were supposed to be more efficient — and left the hardest bit, the finance of local government, to be reformed another day. The bill for his omission is now coming in, but that tends to be the way with the thrusters and boosters: they boost now, you pay later.