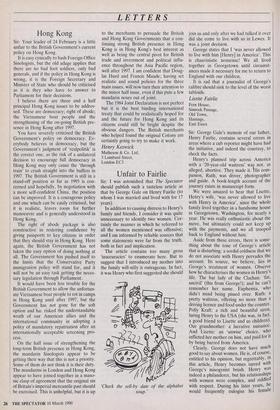 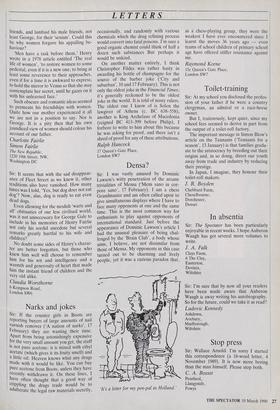 several errors in areas where a cub reporter might have had the initiative, and indeed the courtesy, to check the facts.

Henry's planned trip across America with a '20-year-old waitress' wq not, as alleged, abortive. They made it. His com- panion, Ruth, was driver, photographer and guide. A book-length account of the journey exists in manuscript form. .We were amazed to hear that Lisette, Henry's wife, 'was never allowed to live with Henry in America', since the whole family lived together in a handsome house in Georgetown, Washington, for nearly a year. He was really enthusiastic about the move, but ultimately could not keep up with the payments, and we all trooped back to England without him.

Aside from these errors, there is some- thing about the tone of George's article that is disturbing; a sordid coldness that we do not associate with Henry pervades the account. Its source, we believe, lies in George's treatment of women. Observe how he characterises the women in Henry's life. The bar lady of the Clachan: 'fat, uncivil' (this from George!); and he can't remember her name. Euphemia, who didn't mind being pissed over. Ruth: a pretty waitress, offering no more than a driving licence and food under the counter. Polly Kraft: a rich and beautiful siren, luring Henry to the USA (she was, in fact, a good friend to Lisette and us children). Our grandmother: a lucrative nuisance. And Lisette: an 'unwise' choice, who inflicted her mother on him, and paid for it by being barred from America. Clearly, George does not have much good to say about women. He is, of course, entitled to his opinion, but regrettably, in this article, Henry becomes tarred with George's misogynist brush. Henry was indeed a philanderer, but his relationships with women were complex, and riddled with respect. During his later years, he would frequently eulogise his female

friends, and lambast his male friends, not least George, for their 'sexism'. Could this be why women forgave his appalling be- haviour?

`Men have a task before them,' Henry wrote in a 1978 article entitled 'The real life of women', 'to restore women to some pedestal, even if it is a new one; to bring at least some reverence to their approaches, even if for a time it is awkward to express; to hold the mirror to Venus so that she may contemplate her secret, until he gazes on it with his unlearned face.'

Such obscure and romantic ideas seemed to permeate his friendships with women. Quite how our mother experienced it all we are not in a position to say. Nor is George. It is a pity then that his own jaundiced view of women should colour his account of our father.