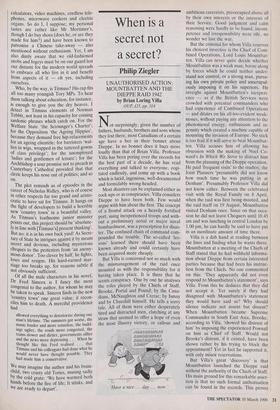 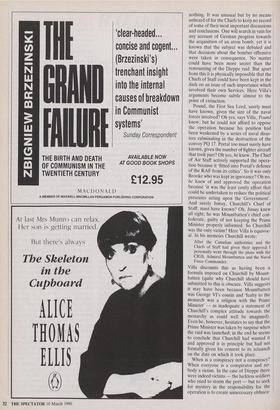 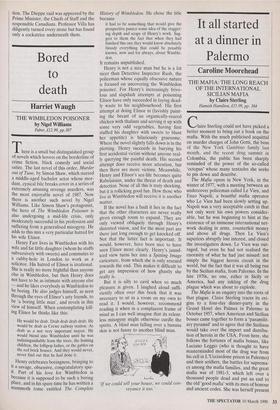 When is a secret not a secret?

of surprisingly, given the number of

fathers, husbands, brothers and sons whom they lost there, most Canadians of a certain age have a bee in their bonnet about Dieppe. In no bonnet does it buzz more loudly than that of Brian Villa. Professor Villa has been poring over the records for the best part of a decade, .he has read everything and talked to everyone, cogi- tated endlessly, and come up with a book which is lucid, ingenious, well-documented and formidably wrong-headed.

Most disasters can be explained either as cock-ups or as conspiracies. Villa considers Dieppe to have been both. Few would argue with him about the first. The concept of a frontal attack on a heavily fortified port, using inexperienced troops and with- out a preliminary aerial or major naval bombardment, was a prescription for disas- ter. The confused chain of command com- pounded the trouble. The so-called 'les- sons' learned there should have been known already and could certainly have been acquired more cheaply.

But Villa is concerned not so much with the mismanagement of the raid once mounted as with the responsibility for it having taken place. It is there that he scents conspiracy. One by one he analyses the roles played by the Chiefs of Staff, Brooke, Portal and Pound; by the Cana- dians, McNaughton and Crerar; by Ismay and by Churchill himself. He tells a sorry tale. All of them were either desperately tired and distracted men, clutching at any straw that seemed to offer a hope of even the most illusory victory, or callous and `Have a nice ... day ... now.' ambitious careerists, preoccupied above all by their own interests or the interests of their Service. Good judgment and calm reasoning were hardly to be found, incom- petence and irresponsibility were rife, no wonder we lost the war.

But the criminal for whom Villa reserves his choicest invective is the Chief of Com- bined Operations, Lord Louis Mountbat- ten. Villa can never quite decide whether Mountbatten was a weak man, borne along by forces which he could neither under- stand nor control, or a strong man, pursu- ing his own private policy and unscrupul- ously imposing it on his superiors. He inveighs against Mountbatten's inexperi- ence — as if the British Services were crowded with potential commanders who had experience of Combined Operations — and dilates on his all-too-evident weak- nesses, without paying any attention to the phenomenal energy, enthusiasm and in- genuity which created a machine capable of mounting the invasion of Europe. No stick is too frail if it will serve to beat Mountbat- ten. Villa accuses him of allowing his obsession with the making of Noel Co- ward's In Which We Serve to distract him from the planning of the Dieppe operation. He paid 'frequent visits' to the studios; the Joint Planners 'presumably did not know how much time he was putting in at Denham'. Presumably Professor Villa did not know either. Between the celebrated visit with the Royal Family on 8 April, when the raid was first being mooted, and the raid itself on 19 August, Mountbatten visited Denham once. Since on that occa- sion he did not leave Chequers until 10.45 am and was lunching in central London by 1.00 pm, he can hardly be said to have put in an inordinate amount of time there.

Villa is a dab hand at reading between the lines and finding what he wants there. Mountbatten at a meeting of the Chiefs of Staff stated that he had withheld informa- tion about Dieppe from certain interested parties because that had been his instruc- tion from the Chiefs. No one commented on this: 'They apparently did not even respond to Mountbatten's statement', says Villa. From this he deduces that they did not accept it. Yet surely if they had disagreed with Mountbatten's statement they would have said so? Why should silence indicate not assent but dissent? When Mountbatten became Supreme Commander in South East Asia, Brooke, according to Villa, 'showed his distrust of him' by imposing the experienced Pownall on him as Chief of Staff. Would not Brooke's distrust, if it existed, have been shown rather by his trying to block the appointment? Yet in fact he supported it, with only minor reservations.

But Villa's great 'discovery' is that Mountbatten launched the Dieppe raid without the authority of the Chiefs of Staff. His main ground for this remarkable asser- tion is that no such formal authorisation can be found in the records. This proves nothing. It was unusual but by no means unheard of for the Chiefs to keep no record of some of their most important discussions and conclusions. One will search in vain for any account of German progress towards the acquisition of an atom bomb, yet it is known that the subject was debated and that decisions about the bomber offensive were taken in consequence. No matter could have been more secret than the remounting of the Dieppe raid. But apart from this it is physically impossible that the Chiefs of Staff could have been kept in the dark on an issue of such importance which involved their own Services. Here Villa's arguments become subtle almost to the point of extinction.

Pound, the First Sea Lord, surely must have known, given the size of the naval forces involved? Oh yes, says Villa, Pound knew, but he could not afford to oppose the operation because his position had been weakened by a series of naval disas- ters culminating in the destruction of the convoy PQ 17. Portal too must surely have known, given the number of fighter aircraft that took part? Oh yes, he knew. The Chief of Air Staff actively supported the opera- tion because it 'fitted into Portal's defence of the RAF from its critics'. So it was only Brooke who was kept in ignorance? Oh no, he knew of and approved the operation because 'it was the least costly effort that could be undertaken to reduce the political pressures acting upon the Government'. And surely Ismay, Churchill's Chief of Staff, must have known? Oh, Ismay knew all right; he was Mountbatten's chief con- federate, guilty of not keeping the Prime Minister properly informed. So Churchill was the only victim? Here Villa is equivoc- al. In his memoirs Churchill wrote:

After the Canadian authorities and the Chiefs of Staff had given their approval I personally went through the plans with the CIGS, Admiral Mountbatten and the Naval Force Commander.

Villa discounts this as having been a formula imposed on Churchill by Mount- batten (quite why Churchill should have submitted to this is obscure. Villa suggests it may have been because Mountbatten was George VI's cousin and 'fealty to the monarch was a religion with the Prime Minister' — as inadequate a statement of Churchill's complex attitude towards the monarchy as could well be imagined). Even he, however, hesitates to say that the Prime Minister was taken by surprise when the raid was launched; in the end he seems to conclude that Churchill had wanted it and approved it in principle but had not formally given his consent to its relaunch on the date on which it took place. When is a conspiracy not a conspiracy? When everyone is a conspirator and no- body a victim. In the case of Dieppe there were indeed victims — the luckless soldiers who tried to storm the port — but to seek for mystery in the responsibility for the operation is to create unnecessary obfusca- tion. The Dieppe raid was approved by the Prime Minister, the Chiefs of Staff and the responsible Canadians. Professor Villa has diligently turned every stone but has found only a cockatrice underneath them.