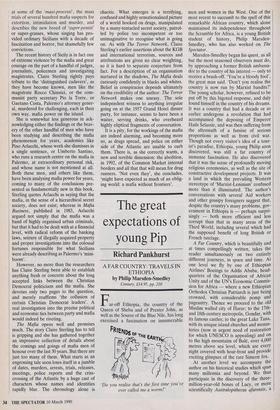 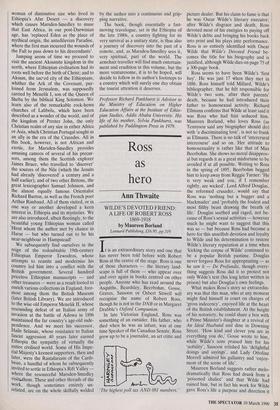 The great expectations of young Pip

A FAR COUNTRY: TRAVELS IN ETHIOPIA by Philip Marsden-Smedley Century, £14.95, pp. 210 Far-off Ethiopia, the country of the Queen of Sheba and of Prester John, as well as the Source of the Blue Nile, has long exercised a fascination on innumerable 'Do you realise that's the first time you've ever called me a worm?' men and women in the West. One of the most recent to succumb to the spell of this remarkable African country, which alone maintained its independence throughout the Scramble for Africa, is a young British student of history, Philip Marsden- Smedley, who has also worked on The Spectator.

Marsden-Smedley began his quest, as all but the most seasoned observers must do, by approaching a former British ambassa- dor to the country of his interest — only to receive a brush-off. 'You're a bloody fool', the great man said. 'Don't you realise the country is now run by Marxist bandits?' The young scholar, however, refused to be put off by this bigoted response, and duly found himself in the country of his dreams. It was a country that had a decade or so earlier undergone a revolution that had accompanied the deposing of Emperor Haile Selassie, and was then suffering from the aftermath of a famine of serious proportions as well as from civil war. Though not every visitor's idea of a tour- ist's paradise, Ethiopia, young Philip soon discovered, was still a far country of immense fascination. He also discovered that it was the scene of profoundly moving religious ceremonies, as well as the site of constructive development projects. It was a land in which the prevailing Western stereotype of 'Marxist-Leninism' confused more than it illuminated. The author's conversations with several Aid workers and other gossipy foreigners suggest that, despite the country's many problems, gov- ernment in Ethiopia is — perhaps surpri- singly — both more efficient and less corrupt than that in many areas of the Third World, including several which had the supposed benefit of long British or French tutelage.

A Far Country, which is beautifully and at times compellingly written, takes the reader simultaneously on two entirely different journeys, in space and time. At one level we fly by one of Ethiopian Airlines' Boeings to Addis Ababa, head- quarters of the Organisation of African Unity and of the UN's Economic Commis- sion for Africa — where a new Ethiopian Orthodox Christian Patriarch is just being crowned, with considerable pomp and pageantry. Thence we proceed to the old Muslim walled city of Harar; to the 17th- and 18th-century metropolis, Gondar, with its famous castles; to the great Lake Tana, with its unique island churches and monas- teries (now in urgent need of restoration for which UNESCO is appealing) and on to the high mountains of Bale, over 4,000 metres above sea level, which are every night covered with hoar-frost and provide exciting glimpses of the rare Simeon fox. At another level we accompany the author on his historical studies which span many millennia and beyond. We thus participate in the discovery of the three- million-year-old bones of Lucy, or more scientifically Australopithecus afarensis, a woman of diminutive size who lived in Ethiopia's Afar Desert — a discovery which causes Marsden-Smedley to muse that East Africa, in our post-Darwinian age, has 'replaced Eden as the place of mythical origin, the antediluvian Paradise, where the first man incurred the wounds of the Fall to pass down to his descendants'.

Jumping aeons of time we proceed to visit the ancient Aksumite kingdom in the north, where Ethiopian civilisation had its roots well before the birth of Christ; and to Aksum, the sac-ed city of the Ethiopians, whither the Ark of the Covenant, pur- loined from Jerusalem, was supposedly carried by Menelik I, son of the Queen of Sheba by the biblical King Solomon. We learn also of the remarkable rock-hewn churches of Lalibela, which have been described as a wonder of the world, and of the kingdom of Prester John, the only Christian realm of any size in either Africa or Asia, which Christian Portugal sought as an ally in the era of the Crusades. All in this book, however, is not African and exotic, for Marsden-Smedley provides amusing cameos of several of his precur- sors, among them the Scottish explorer James Bruce, who travelled to 'discover' the sources of the Nile (which the Jesuits had already 'discovered' a century and a half earlier); and of two other Britons, the great lexicographer Samuel Johnson, and the almost equally famous Orientalist Richard Burton, as well as the French poet Arthur Rimbaud. All of them visited, or in one way or another developed a keen interest in, Ethiopia and its mysteries. We are also introduced, albeit fleetingly, to the beautiful young Ethiopian woman called 'Hirut whom the author met by chance in Harar — but who turned out to be his near-neighbour in Hampstead!

We subsequently find ourselves in the reign of the redoubtable 19th-century Ethiopian Emperor Tewodros, whose attempts to reunite and modernise his country led him into a conflict with the British government. Several hundred priceless Ethiopian manuscripts — and other treasures — were as a result looted to enrich various collections in England, fore- most among them the British Museum (later British Library). We are introduced to the wise old Emperor Menelik 11, whose resounding defeat of an Italian army of invasion at the battle of Adowa in 1896 maintained the far country's age-old inde- pendence. And we meet his successor, Haile Selassie, whose resistance to Italian fascist aggression 40 years later earned Ethiopia the sympathy of virtually the entire civilised world. Some of His Impe- rial Majesty's keenest supporters, then and later, were the Rastafarians of the Carib- bean, a handful of whom he subsequently invited to settle in Ethiopia's Rift Valley— where the resourceful Marsden-Smedley visits-them. These and other threads of the work, though sometimes entirely un- related, are on the whole skilfully welded by .the author into a continuous and grip ping narrative.

The book, though essentially a fast- moving travelogue, set in the Ethiopia of the late 1980s, a country fighting for its very survival as a unitary state, is thus also a journey of discovery into the past of a remote, and, as Marsden-Smedley sees it, very spiritual, part of the world. The armchair traveller will find much entertain- ment and erudition in this volume, but the more venturesome, it is to be hoped, will decide to follow in its author's footsteps to a country which will surely one day obtain the tourist attention it deserves.

Professor Richard Pankhurst is Advisor to the Ministry of Education on Higher Education Affairs at the Institute of Ethio- pian Studies, Addis Ababa University. His life of his mother, Sylvia Pankhurst, was published by Paddington Press in 1979.