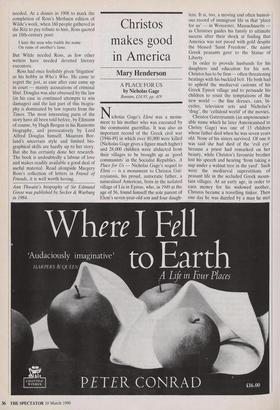 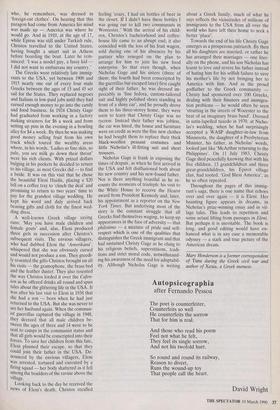 A PLACE FOR US by Nicholas Gage Bantam, £14.95, pp. 419 N icholas Gage's Eleni was a monu- ment to his mother who was executed by the communist guerrillas. It was also an important record of the Greek civil war (1946-49) in which over 80,000 were killed (Nicholas Gage gives a figure much higher) and 28,000 children were abducted from their villages to be brought up as 'good communists' in the Socialist Republics. A Place for Us — Nicholas Gage's sequel to Eleni — is a monument to Christos Gat- zoyiannis, his proud, autocratic father, a naturalised American, born in the isolated village of Lia in Epirus, who, in 1949 at the age of 56, found himself the sole parent of Eleni's seven-year-old son and four daugh-

ters. It is, too, a moving and often humor- ous record of immigrant life in that 'place for us' — in Worcester, Massachusetts as Christoes guides his family to ultimate success after their shock at finding that America was not paved with gold despite the blessed 'Saint Freedom', the name Greek peasants gave to the Statue of Liberty.

In order to provide husbands for his daughters and education for his son, Christos has to be firm often threatening beatings with his buckled belt. He both had to uphold the mediaeval customs of his Greek Epirot village and to persuade his children to resist the temptations of the new world — the fine dresses, cars, bi- cycles, television sets and Nicholas's `drug', the 'celluloid world' of the movies.

Christos Gatzoyiannis (an unpronounce- able name which he later Americanised to Christy Gage) was one of 13 children whose father died when he was seven years old. None of his sisters survived. Of one it was said she had died of the 'evil eye' because a priest had remarked on her beauty, while Christos's favourite brother lost his speech and hearing 'from taking a nap under a walnut tree in the yard'. Such were the mediaeval superstitions of peasant life in the secluded Greek moun- tain villages. At an early age, in order to earn money for his widowed mother, Christos became a travelling tinker. Then one day he was dazzled by a man he met

who, he remembers, was dressed in `foreign-cut clothes'. On hearing that this paragon had come from America his mind was made up — America was where he would go. And in 1910, at the age of 17, while Epirus was still under Turkish rule, Christos travelled to the United States, having bought a smart suit in Athens before boarding the boat. Later he rem- inisced: 'I was a model guy, a fussy kid I did not want to embarrass my country.'

The Greeks were relatively late immig- rants to the USA, yet between 1900 and 1915 nearly one out of every four male Greeks between the ages of 15 and 45 set sail for the States. They replaced negroes and Italians in low-paid jobs until they had earned enough money to go into the candy and food business. In 1924 Christy Gage had graduated from working in a factory making strainers for $6 a week and from setting up pins in the evening in a bowling alley for $4 a week. By then he was making good money selling fruit from his own truck which toured the wealthy areas where, in his words, 'Ladies so fine skin, so pale, you see milk go down their throat' were his rich clients. With prized dollars bulging in his pockets he decided to return to his village, as most Greeks did — to find a bride. It was on this visit that he chose the beautiful Eleni Haidis, placing a $20 bill on a coffee tray to 'clinch the deal' and promising to return to two years' time to pay for the grandest village wedding. He kept his word and duly arrived back bearing gifts and cloth for the finest wed- ding dress.

A well-known Greek village saying runs: 'May you have male children and female goats' and, alas, Eleni produced three girls in succession after Christos's subsequent visits. The envious villagers, who had dubbed Eleni the `Amerikana', whispered that she was obviously cursed and would not produce a son. They greedi- ly resented the gifts Christos brought on all his visits — the gramophone, the brass bed and the feather duster. They also resented the way Christos lorded it over the Cafen- ion as he offered drinks all round and spun tales about the glittering life in the USA. It was after his last visit to Eleni in 1938 that she had a son — born when he had just returned to the USA. But she was never to see her husband again. When the commun- ist guerrillas captured the village in 1948, they decreed that all male children be- tween the ages of three and 14 were to be sent to camps in the communist states and that all girls would be conscripted into their forces. To save her children from this fate, Eleni planned their escape, so that they could join their father in the USA. De- nounced by the envious villagers, Eleni was arrested, tortured and executed by a firing squad — her body shattered as it fell among the boulders of the ravine above the village.

Looking back to the day he received the news of Eleni's death, Christos recalled feeling 'crazy, I had six bottles of beer in the closet. If I didn't have these bottles I was going out to kill two communists in Worcester.' With the arrival of his child- ren, Christos's bachelorhood and coffee- house life came to an abrupt end; it also coincided with the loss of his fruit wagon, sold during one of his absences by his partner who reneged on the plan to arrange for him to join his new food enterprise. So that even though, when Nicholas Gage and his sisters (three of them; the fourth had been conscripted by the guerrillas but escaped later) first caught sight of their father, he was dressed im- peccably in 'tine fedora, custom-tailored suit and highly polished shoes standing in front of a shiny car', and he proudly drove them to his three-storey home, they were soon to learn that Christy Gage was no tycoon. Instead their father was jobless, the car was hired, the house and furniture were on credit as were the fine new clothes he had bought them to replace their thick black-woollen peasant costumes and little Nicholas's ill-fitting suit and short trousers.

Nicholas Gage is frank in exposing the times of despair, as when he first arrived in the USA and felt disillusioned both about his new country and his new-found father. Nor is there anything boastful as he re- counts the moments of triumph: his visit to the White House to receive the Hearst award from President Kennedy and, later, his appointment as a reporter on the New York Times. But underlying most of the story is the constant struggle that all Greeks find themselves waging, to keep up appearances in the face of adversity — that philotimo — a mixture of pride and self- respect which is one of the qualities that distinguishes the Greek immigrant and that had sustained Christy Gage as he clung to his religious beliefs, superstitions, tradi- tions and strict moral code, notwithstand- ing his awareness of the need for adaptabil- ity. Although Nicholas Gage is writing

about a Greek family, much of what he says reflects the vicissitudes of millions of immigrants to the USA from all over the world who have left their home to seek a better 'place'.

Towards the end of his life Christy Gage emerges as a prosperous patriarch. By then all his daughters are married, or rather he has arranged their marriages — one liter- ally on the phone, and his son Nicholas has learnt to love and revere his father instead of hating him for his selfish failure to save his mother's life by not bringing her to America with him. And as the proud godfather to the Greek community Christy had sponsored over 100 Greeks, dealing with their finances and immigra- tion problems — he would often be seen `strutting in the streets of Wocester to the beat of an imaginary brass band'. Dressed in satin-lapelled tuxedo in 1970, at Nicho- las's wedding, when he had surprisingly accepted a WASP daughter-in-law from Minnesota, the daughter of a Presbyterian Minister, his father, in Nicholas' words, looked just like 'McArthur returning to the Philippines'. On 11 July 1983, Christy Gage died peacefully knowing that with his five children, 13 grandchildren and three great-grandchildren, his Epirot village clan, had rooted. 'God Bless America', as he so often repeated.

Throughout the pages of this immig- rant's saga, there is one name that echoes over and over again — it is Eleni. Her haunting figure appears in dreams, in Nicholas's prize-winning essay and in vil- lage tales. This leads to repetition and some actual lifting from passages in Eleni. But perhaps it is inevitable. The book is long, and good editing would have en- hanced what is in any case a memorable odyssey — a stark and true picture of the American dream.

Mary Henderson is a former correspondent of Time during the Greek civil war and author of Xenia, a Greek memoir.