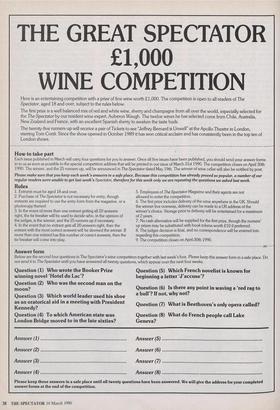 Here is an entertaining competition with a prize of fine wine worth £1,000. The competition is open to all readers of The Spectator, aged 18 and over, subject to the rules below.

The first prize is a well balanced mix of red and white wine, sherry and champagne from all over the world, especially selected for the The Spectator by our resident wine expert, Auberon Waugh. The twelve wines he has selected come from Chile, Australia, New Zealand and France, with an excellent Spanish sherry to awaken the taste buds.

The twenty-five runners-up will receive a pair of Tickets to see "Jeffrey Bernard is Unwell" at the Apollo Theatre in London, starring Tom Conti. Since the show opened in October 1989 it has won critical acclaim and has consistently been in the top ten of London shows.

How to take part Each issue published in March will carry four questions for you to answer. Once all five issues have been published, you should send your answer forms in to us as soon as possible to the special competition address that will be printed in our issue of March 31st 1990. The competition closes on April 30th 1990. The winner, and the 25 runners-up, will be announced in The Spectator dated May 19th. The winner of wine cellar will also be notified by post.

Please make sure that you keep each week's answers in a safe place. Because this competition has already proved so popular, a number of our regular readers were unable to get last week's Spectator, therefore for this week only we are repeating the questions we asked last week.

Rules 1. Entrants must be aged 18 and over. 5. Employees of The Spectator Magazine and their agents are not 2. Purchase of The Spectator is not necessary for entry, though allowed to enter the competition.

entrants are required to use the entry form from the magazine, or a 6. The first prize includes delivery of the wine anywhere in the UK. Should photocopy thereof. the winner live overseas, delivery can be made to a UK address of the 3. In the event of more than one entrant getting all 20 answers winner's choice. Storage prior to delivery will be entertained for a maximum right, the tie breaker will be used to decide who, in the opinion of of 2 years.

the judges, is the winner, and the 25 runners up if necessary. 7. No cash alternative will be supplied for the first prize, though the runners'

4. In the event that no entrant gets all 20 answers right, then the up prizes may be substituted with book tokens worth £10 if preferred.

entrant with the most correct answers will be deemed the winner. If 8. The judges decision is final, and no correspondence will be entered into

more than one entrant has this number of correct answers, then the regarding this competition.

Answer form Below are the second four questions in The Spectator's wine competition together with last week's four. Please keep this answer form in a safe place. Do not send it to The Spectator until you have answered all twenty questions, which appear over the next four weeks.

Question (2) Who was the second man on the moon?

Question (3) Which world leader used his shoe as an oratorical aid in a meeting with President Kennedy?

Question (4) To which American state was London Bridge moved to in the late sixties? Question (5) Which French novelist is known for beginning a letter 'J'accuse'?

Question (7) What is Beethoven's only opera called?

Please keep these answers in a safe place until all twenty questions have been answered. We will give the address for your completed answer forms at the end of the competition.