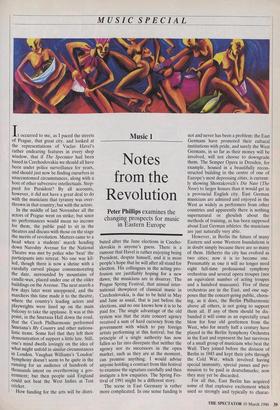 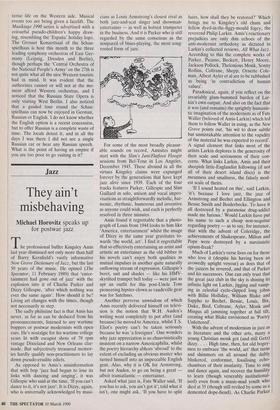 Notes from the Revolution

Peter Phillips examines the changing prospects for music in Eastern Europe It occurred to me, as I paced the streets of Prague, that great city, and looked at the representations of Vaclav Havel's rather endearing features in every shop window, that if The Spectator had been based in Czechoslovakia we should all have been under police surveillance for years, and should just now be finding ourselves in unaccustomed circumstances, along with a host of other subversive intellectuals. Stop- pard for President? By all accounts, however, it did not have a great deal to do with the musicians that tyranny was over- thrown in that country; but with the actors.

In the middle of last November all the actors of Prague went on strike; but since no performances would mean no income for them, the public paid to sit in the theatres and discuss with those on the stage the merits of revolution. Matters came to a head when a students' march heading down Narodny Avenue for the National Theatre was met by police who 'beat' the participants into retreat. No one was kil- led, though there is now a shrine with a carefully carved plaque commemorating the date, surrounded by mountains of candle-wax, placed under one of the older buildings on the Avenue. The next march a few days later went unopposed, and the marchers this time made it to the theatre, where the country's leading actors and playwrights were lined up on the main balcony to take the applause. It was at this point, in the Smetana Hall down the road, that the Czech Philharmonic performed Smetana's My Country and other nationa- listic items. Some feel that they left their demonstration of support a little late. Still, one's mind dwells lovingly on the idea of what might unfold in similar circumstances in London. Vaughan Williams's 'London' Symphony doesn't seem to be quite in the running for an audience of hundreds of thousands intent on overthrowing a gov- ernment; but then people said England could not beat the West Indies at Test cricket.

How funding for the arts will he distri- buted after the June elections in Czecho- slovakia is anyone's guess. There is a rumour that Havel is rather enjoying being President, despite himself, and it is most people's hope that he will after all stand for election. His colleagues in the acting pro- fession are justifiably hoping for a new dawn; the musicians are in disarray. The Prague Spring Festival, that annual inter- national showpiece of classical music in Czechoslovakia, is due to be held in May and June as usual, that is just before the elections, and no one knows how it is to be paid for. The single advantage of the old system was that the state concert agency received a sum of hard currency from the government with which to pay foreign artists performing at this festival; but the principle of a single authority has now fallen so far into disrepute that neither the agency nor its successors in the open market, such as they are at the moment, can promise anything. I would advise anyone holding a contract from this festival to examine the signature carefully and then instigate a few enquiries. The Spring Fes- tival of 1991 might be a different story.

The scene in East Germany is rather more complicated. In one sense funding is not and never has been a problem: the East Germans have promoted their cultural institutions with pride, and surely the West Germans, in so far as their money will be involved, will not choose to downgrade them. The Semper Opera in Dresden, for example, housed in a beautifully recon- structed building in the centre of one of Europe's most depressing cities, is current- ly showing Shostakovich's Die Nase (The Nose) to larger houses than it would get in a provincial English city. East German musicians are admired and enjoyed in the West as widely as performers from other countries and apparently there is nothing supernatural or ghoulish about the methods of training, as has been supposed about East German athletes: the musicians are just naturally very able.

However, in Berlin the future of many Eastern and some Western foundations is in doubt simply because there are so many of them. Hitherto the city has evolved as two cities; now it is to become one. Presumably as one it will no longer need eight full-time professional symphony orchestras and several opera troupes (nor an equivalent number of acting troupes and a hundred museums). Five of these orchestras are in the East, and one sup- poses that the concert-going public, choos- ing, as it does, the Berlin Philharmonic above all others, is not going to support them all. If any of them should be dis- banded it will come as an especially cruel blow for four old gentlemen from the West, who for nearly half a century have played in the Berlin Symphony Orchestra in the East and represent the last survivors of a small group of musicians who beat the Wall. They joined before the division of Berlin in 1945 and kept their jobs through the Cold War, which involved having special immunity, special passes and per- mission to be paid in deutschmarks; now they may yet be discarded.

For all this, East Berlin has acquired some of that explosive excitement which used so strongly and typically to charac- terise life on the Western side. Musical events too are being given a facelift. The Musiktage 1990 series is advertised with a colourful pseudo-children's happy draw- ing, resembling the 'Espana' holiday logo. The Grosser Konzertsaal of the Schau- spielhaus is host this month to the three leading symphony orchestras of East Ger- many (Leipzig, Dresden and Berlin), though perhaps the 'Central Orchestra of the National People's Army' on the 27th is not quite what all the nice Western tourists had in mind. It was evident that the authorities cannot or will not at the mo- ment afford Western orchestras, and I noticed that the Russian State Opera is only visiting West Berlin. I also noticed that a guided tour round the Schau- spielhaus can now be enjoyed in German, Russian or English. I do not know whether the English option is a recent concession, but to offer Russian is a complete waste of time. The locals detest it, and in all the days I was there I did not see a single Russian car or hear any Russian speech. What is the point of having an empire if you are too poor to go visiting in it?