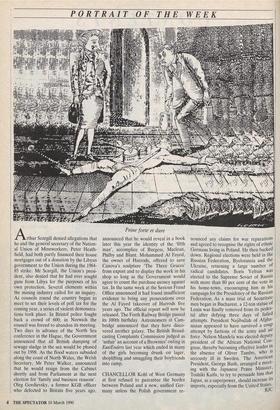 Peine forte et dure Arthur Scargill denied allegations that he and the general secretary of the Nation- al Union of Mineworkers, Peter Heath- field, had both partly financed their house mortgages out of a donation by the Libyan government to the Union during the 1984- 85 strike. Mr Scargill, the Union's presi- dent, also denied that he had ever sought guns from Libya for the purposes of his own protection. Several elements within the mining industry called for an inquiry. As councils round the country began to meet to set their levels of poll tax for the coming year, a series of violent demonstra- tions took place. In Bristol police fought back a crowd of 600; in Norwich the council was forced to abandon its meeting. Two days in advance of the North Sea conference in the Hague, the Government announced that all British dumping of sewage sludge in the sea would be phased out by 1998. As the flood waters subsided along the coast of North Wales, the Welsh Secretary, Mr Peter Walker, announced that he would resign from the Cabinet shortly and from Parliament at the next election for 'family and business reasons'. Oleg Gordievsky, a former KGB officer who defected to Britain five years ago, announced that he would reveal in a book later this year the identity of the 'fifth man', accomplice of Burgess, Maclean, Philby and Blunt. Mohammed Al Fayed, the owner of Harrods, offered to save Canova's sculpture 'The Three Graces' from export and to display the work in his shop so long as the Government would agree to count the purchase money against tax. In the same week at the Serious Fraud Office announced it had found insufficient evidence to bring any prosecutions over the Al Fayed takeover of Harrods five years ago. The official report will now be released. The Forth Railway Bridge passed its 100th birthday. Astronomers at Cam- bridge announced that they have disco- vered another galaxy. The British Broad- casting Complaints Commission judged as `unfair' an account of a Brownies' outing in EastEnders last year which ended in many of the girls becoming drunk on lager, shoplifting and smuggling their boyfriends into camp.

CHANCELLOR Kohl of West Germany at first refused to guarantee the border between Poland and a new, unified Ger- many unless the Polish government re-

nounced any claims for war reparations and agreed to recognise the rights of ethnic Germans living in Poland. He then backed down. Regional elections were held in the Russian Federation, Byelorussia and the Ukraine, returning a large number of radical candidates. Boris Yeltsin was elected to the Supreme Soviet of Russia with more than 80 per cent of the vote in his home-town, encouraging him in his campaign for the Presidency of the Russian Federation. As a mass trial of Securitate men began in Bucharest, a 12-ton statue of Lenin was finally removed from its pedes- tal after defying three days of failed attempts. President Najibullah of Afgha- nistan appeared to have survived a coup attempt by factions of the army and air force. Nelson Mandela was elected deputy president of the African National Con- gress, thereby becoming effective leader in the absence of Oliver Tambo, who is seriously ill in Sweden. The American President, George Bush, arranged a meet- ing with the Japanese Prime Minister, Toshiki Kaifu, to try to persuade him that Japan, as a superpower, should increase its imports, especially from the United States.