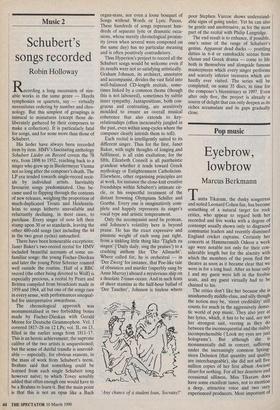 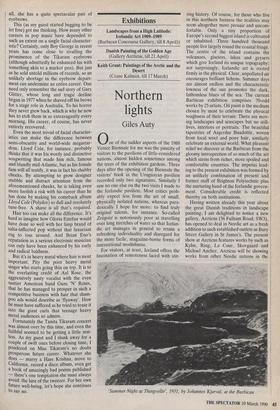 Tanita Tikaram, the dusky songstress and noted Leonard Cohen fan, has become something of a natural target for rock critics, who appear to regard both her recorded and live works with a degree of contempt usually shown only to disgraced communist leaders and recently dismissed England cricket captains. Certainly her concerts at Hammersmith Odeon a week ago were notable not only for their con- siderable length but for the alacrity with which the members of the press fled the theatre as soon as it became clear that we were in for a long haul. After an hour only I and my guest were left in the freebie seats, and my guest virtually had to be chained to his.

The critics don't like her because she is unashamedly middle-class, and silly though the notion may be, 'street credibility' still counts for much in the aggressively demo- tic world of pop music. They also jeer at her lyrics, which, it has to be said, are not her strongest suit, veering as they do between the inconsequential and the risibly incomprehensible (Took my eyes are just holograms'). But although she is monumentally dull in concert, suffering under the increasingly common Spring- steen Delusion (that quantity and quality are interchangeable), she did not sell five million copies of her first album Ancient Heart for nothing. For all her dourness and occasional silliness, Miss Tikaram does have some excellent tunes, not to mention a deep, attractive voice and two very experienced producers. Most important of all, she has a quite spectacular pair of eyebrows.

This (as my guest started begging to be let free) got me thinking. How many other careers in pop music have depended to such an extent on a single facial character- istic? Certainly, only Boy George in recent years has come close to rivalling the prominence of the Tikaram eyebrows (although admittedly he enhanced his with something akin to a marker pen). But just as he sold untold millions of records, so an unlikely shortage in the eyebrow depart- ment can undermine an entire career. One need only remember the sad story of Gary Glitter, whose long and tragic decline began in 1977 when he shaved off his brows for a stage role in Australia. To his horror they never grew back, which is why he now has to etch them in so extravagantly every morning. His career, of course, has never entirely recovered.

Even the most trivial of facial character- istics can make the difference between semi-obscurity and world-wide megastar- dom. Lloyd Cole, for instance, probably thinks that it was his wordy and distinctive songwriting that made him rich, famous and blandly mid-Atlantic, but as his female fans will all testify, it was in fact his chubby cheeks. By attempting to grow designer stubble and distract attention from the aforementioned cheeks, he is taking even more foolish a risk with his career than he has done by making his comeback album Lloyd Cole (Polydor) so dull and resolutely tune-free. A shave is all that's required.

Hair too can make all the difference. It's hard to imagine how Gloria Estefan would have done so well with her limp brand of salsa-inflected pop without that luxuriant rug to toss around. And Brian Eno's reputation as a serious electronic musician can only have been enhanced by his early and radical baldness.

But it's in heavy metal where hair is most important. Pity the poor heavy metal singer who starts going thin on top. It is to the everlasting credit of Axl Rose, the aggressively nasty vocalist with the even nastier American band Guns 'N' Roses, that he has managed to prosper in such a competitive business with hair that sham- poo ads would describe as 'flyaway'. How he must have suffered as he tried to tease it into the giant curls that teenage heavy metal audiences so admire.

Fortunately the Tanita Tikaram concert was almost over by this time, and even the faithful seemed to be getting a little rest- less. As my guest and I slunk away for a couple of swift ones before closing time, I pondered on Miss Tikaram's no doubt prosperous future career. Whatever she does — marry a Hare Krishna, move to California, record a disco album, even get a book of amazingly bad poems published — there's one temptation she must always avoid: the lure of the tweezer. For her own future well-being, let's hope she continues to say no.