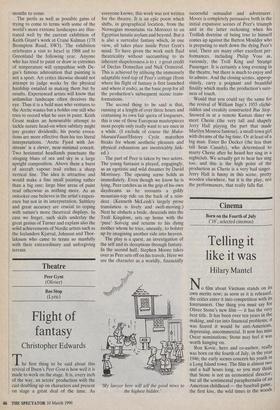 The first thing to be said about this revival of Ibsen's Peer Gynt is how well it is made to work on the stage. It is, every inch of the way, an actors' production with the cast doubling up on characters and present on stage a great deal of the time. As

everyone knows, this work was not written for the theatre. It is an epic poem which shifts, in geographical location, from the Norwegian mountains via Morocco to an Egyptian lunatic asylum and beyond. But it is also a surrealist fantasy which, in one view, all takes place inside Peter Gynt's mind. To have given the work such fluid theatricality without succumbing to its inherent shapelessness is to t e great credit of Declan Donnellan and Nick Ormerod. This is achieved by utilising the immensely adaptable roof-top of Peer's cottage (from where his flight of fantasy is first launched and where it ends), as the basic prop for all the production's subsequent scenic trans- formations.

The second thing to be said is that, running at a length of over three hours and containing its own fair quota of longueurs, this is one of those European masterpieces most people only really want to see once in a while. (I exclude of course the Maha- bharatalFaustlHistory Cycle marathon freaks for whom aesthetic pleasure and physical exhaustion are inextricably ,link- ed.)

The part of Peer is taken by two actors. The young fantasist is played, engagingly, as an egotistic and wild dreamer by David Morrissey. The opening scene holds us immediately. Even though we know he is lying, Peer catches us in the grip of his own daydreams as he recounts a giddy mountain-top ride on the back of a rein- deer. (Kenneth McLeish's largely prose translation is lively and swift-moving.) Next he abducts a bride, descends into the Troll Kingdom, sets up home with the `pure' Solveig and returns to his dying mother whom he tries, uneasily, to bolster up by imagining another ride into heaven.

The play is a quest, an investigation of the self and its deceptions through fantasy. In the second half, Stephen Moore takes over as Peer sets off on his travels. Here we see the character as a worldly, financially `My lawyer here will tell the good news to the highest bidder.' successful sensualist and adventurer. Moore is completely persuasive both in the initial expansive scenes of Peer's triumph and in the latter reckoning when his Trollish doctrine of being true to himself comes up against the Button Moulder who is preparing to melt down the dying Peer's soul. There are many other excellent per- formances, including Philip Voss as, variously, the Troll King and Strange Passenger. It is certainly a long evening in the theatre, but there is much to enjoy and to admire. And the closing scenes, approp- riately, carry a poignant and beautiful finality which marks the production's sure- ness of touch.

Would that you could say the same for the revival of William Inge's 1955 cliché- ridden and creakily constructed Bus Stop. Snowed in at a remote Kansas diner we meet Cherie (the very tall and shapely Jerry Hall playing the part that made Marilyn Monroe famous), a small-town girl with dreams of the big time. Or at least of a big man. Enter Bo Decker (the less than tall Sean Cassidy), who determined to marry Cherie after he heard her sing in a nightclub. We actually get to hear her sing too, and this . is the high point of the production as Cherie is a very bad singer. Jerry Hall is funny in this scene, pretty wooden elsewhere, but it is the play, not the performances, that really falls flat.