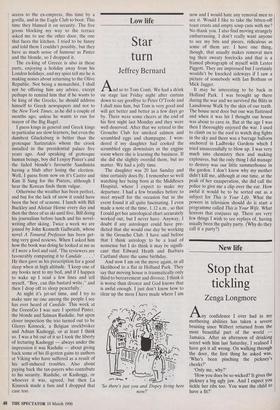 And so to Tom Conti. We had a drink on stage last Friday night after curtain down to say goodbye to Peter O'Toole and I shall miss him, but Tom is very good and will get better and better as a few days go by. There were some cheers at the end of his first night last Monday and they were well deserved. After that we retired to the Groucho Club for smoked salmon and scrambled eggs and champagne. I won- dered if my daughter had cooked the scrambled eggs downstairs in the engine room where she is learning the business. If she did she slightly overdid them, but no matter. We had a jolly time.

The daughter was 20 last Sunday and time certainly does fly. I remember so well watching her being born at the Middlesex Hospital, where I expect to make my departure. I had a few brandies before to steel myself for the occasion but in the event found it all quite fascinating. I even made a note of the time, 1.12 a.m., so that I could get her astrological chart accurately worked out, but I never have. Anyway, I doubt if any astrologer could have pre- dicted that she would one day be working in the Grouch() Club. I have said before that I think astrology to be a load of nonsense but I do think it may be signifi- cant that Edward Heath and Barbara Cartland share the same birthday.

And now I am on the move again, in all likelihood to a flat in Holland Park. They say that moving house is traumatically only third to bereavement and divorce. I think it is worse than divorce and God knows that is awful enough. I just don't know how to clear up the mess I have made where I am 'So there's just you and Dopey living here now?' now and I would hate any removal men to see it. Would I like to take the bitten-off toast crusts and empty soup cans with me? No thank you. I also find moving strangely embarrassing. I don't really want anyone to see my bits and pieces, ridiculous as some of them are. I have one thing, though, that usually makes removal men tug their sweaty forelocks and that is a framed photograph of myself with Lester Piggott. They are impressed but I certainly wouldn't be knocked sideways if I saw a picture of somebody with Ian Botham or Mick Jagger.

It may be interesting to be back in Holland Park. I was brought up there during the war and we survived the Blitz in Lansdowne Walk by the skin of our teeth. The house next door but one was flattened and when it was hit I thought our house was about to cave in. But at the age I was then I thoroughly enjoyed the war. I used to climb on to the roof to watch dog fights in the sky and there was a barrage balloon anchored in Ladbroke Gardens which I tried unsuccessfully to blow up. I was very much into chemistry then and making explosives, but the only thing I did manage to destroy was our little summerhouse in the garden. I don't know why my mother didn't kill me, although at one time, at the peak of her exasperation, she did call the police to give me a clip over the ear. How awful it would be to be sorted out as a subject for This is Your Life. What the powers in television should do is start a programme called This is Your Wife. What horrors that conjures up. There are very few things I wish to see replays of, having usually been the guilty party. (Why do they call it a party?)