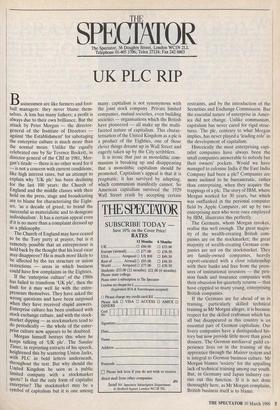 Busincssmen are like farmers and foot- ball managers: they never blame them- selves. A loss has many fathers; a profit is always due to their own brilliance. But the attack by Peter Morgan — the director- general of the Institute of Directors against 'the Establishment' for sabotaging the enterprise culture is much more than the normal moan. Unlike the equally celebrated one by Sir Terence Beckett, as director-general of the CBI in 1981, Mor- gan's tirade — there is no other word for it — is not a concern with current conditions, like high interest rates, but an attempt to explain why `UK plc' has been declining for the last 100 years: the Church of England and the middle classes with their hold on the press, stage and broadcasting are to blame for characterising the Eight- ies, 'as a decade of greed, to brand the successful as materialistic and to denigrate individualism'. It has a certain appeal even if it is no more than a complaint dressed up as a philosophy.

The Church of England may have ceased to be the Tory party at prayer, but is it remotely possible that an entrepreneur is held back by the thought that his local vicar may disapprove? He is much more likely to be affected by the tax structure or union restrictions — areas in which business could have few complaints in the Eighties. If the 'enterprise culture' of the 1980s has failed to transform `UK plc', then the fault for it may well lie with the entre- preneurs themselves. They have asked the wrong questions and have been surprised when they have received stupid answers. Enterprise culture has been confused with stock exchange culture, and with the stock- market dipping — as stockmarkets tend to do periodically — the whole of the enter- prise culture now appears to be doubted.

Morgan himself betrays this when he keeps talking of `UK plc'. The Sunday Times, in reprinting extracts of his speech, heightened this by scattering Union Jacks, with PLC in bold letters underneath, throughout the text. But why should the United Kingdom be seen as a public limited company with a stockmarket quote? N that the only form of capitalist enterprise? The stockmarket may be a symbol of capitalism but it is one among

many: capitalism is not synonymous with the joint stock company. Private limited companies, mutual societies, even building societies — organisations which the British have pioneered — all make up the multi- faceted nature of capitalism. This charac- terisation of the United Kingdom as a plc is a product of the Eighties, one of those clever things dreamt up in Wall Street and eagerly taken up by the City scribblers.

It is ironic that just as monolithic com- munism is breaking up and disappearing that a monolithic capitalism should be promoted. Capitalism's appeal is that it is pragmatic; it has survived by adapting, which communism manifestly cannot. So American capitalism survived the 1929 Wall Street crash by accepting certain restraints, and by the introduction of the Securities and Exchange Commission. But the essential nature of enterprise in Amer- ica did not change. Unlike communism, capitalism has never cared for rigid struc- tures. The plc, contrary to what Morgan implies, has never played a 'leading role' in the development of capitalism.

Historically the most enterprising capi- talist companies have always been the small companies answerable to nobody but their owners' pockets. Would we have managed to colonise India if the East India Company had been a plc? Companies are more inclined to be bureaucratic, rather than enterprising, when they acquire the trappings of a plc. The story of IBM, where Morgan worked for 30 years, but which was outflanked in the personal computer field by Apple Computer, set up by two enterprising men who were once employed by IBM, illustrates this perfectly.

The Germans, whom Morgan invokes, realise this well enough. The great major- ity of the wealth-creating British com- panies are on the stockmarket; the great majority of wealth-creating German com- panies are not on the stockmarket. They are family-owned companies, heavily export-oriented with a close relationship with their banks and free from the press- ures of institutional investors — the pen- sion funds and insurance companies with their obsession for quarterly returns — that have crippled so many young, enterprising British companies.

If the Germans are far ahead of us in training, particularly skilled technical training as Mr Morgan alleges, it is because respect for the skilled craftsman which has all but disappeared in this country is an essential part of German capitalism. Our livery companies have a distinguished his- tory but now provide little more than good dinners. The German mediaeval guild ex- perience lives on in the training of the apprentice through the Maister system and is integral to German business culture. Mr Morgan blames 'society' for the appalling lack of technical training among our youth. But, in Germany and Japan industry car- ries out this function, If it is not done thoroughly here, as Mr Morgan complains, British business itself is to blame.