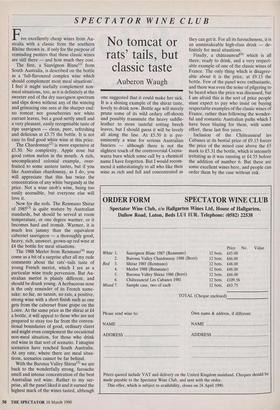 No tomcat or rats' tails, but classic taste

Five excellently cheap wines from Au- stralia with a classic from the southern Rhone thrown in, if only for the purpose of reminding punters that these classic wines are still there — and how much they cost. The first, a Sauvignon Blanc(1) from South Australia, is described on the bottle as a `full-flavoured complex wine which should complement most meal situations'.

I feel it might usefully complement non- meal situations, too, as it is definitely at the sweeter end of the dry sauvignon spectrum and slips down without any of the wincing and grimacing one sees at the sharper end: no tomcat nor gooseberries nor white currant leaves, but a good nettly smell and a very pleasant, easily recognisable taste of ripe sauvignon — clean, pure, refreshing and delicious at £3.75 the bottle. It is not easy to find good white wine at this price. The Chardonnay(2) is more expensive at £5.50. No complexity. Apple nose but good rotten melon in the mouth. A rich, uncomplicated colonial example, over- fruited to some austere tastes, but if you like Australian chardonnay, as I do, you will appreciate that this has twice the concentration of any white burgundy at the price. Not a wine snob's wine, being too easily accessible, but everyone else will love it.

Now for the reds. The Renmano Shiraz of 1985(3) is quite mature by Australian standards, but should be served at room temperature, or one degree warmer, or it becomes hard and ironish. Warmer, it is much less jammy than the equivalent cabernet sauvignon — a thoroughly good, heavy, rich, unsweet, grown-up red wine at £4 the bottle for meal situations.

The 1988 Merlot from Renmano(4) may come as a bit of a surprise after all my rude comments about the rats'-tails taste of young French merlot, which I see as a particular wine trade perversion. But Au- stralian merlot is plainly different, and should be drunk young. A herbaceous nose is the only reminder of its French name- sake: no fur, no tannin, no rats, a positive, strong wine with a short finish such as one gets from the cabernet franc grape on the Loire. At the same price as the shiraz at £4 a bottle, it will appeal to those who are not prepared to stray too far from the conven- tional boundaries of good, ordinary claret and might even complement the occasional non-meal situation, for those who drink red wine in that sort of scenario. I imagine scenarios have reached South Australia. At any rate, where there are meal situa- tions, scenarios cannot be far behind.

With the Barossa Valley Shiraz(5) we are back to the wonderfully strong, farouche smell and intense concentration of the best Australian red wine. Rather to my sur- prise, all the panel liked it and it earned the highest mark of the wines tasted, although one suggested that it could make her sick. It is a shining example of the shiraz taste, lovely to drink now. Bottle age will merely prune some of its wild cedary off-shoots and possibly transmute the heavy saddle- leather to more tasteful rotting beech leaves, but I should guess it will be lovely all along the line. At £5.50 it is pre- eminently a wine for serious Australian fanciers — although there is not the slightest touch of the controversial Cocoa- warra burn which some call by a chemical name I have forgotten. But I would recom- mend it unhesitatingly to all who like their wine as rich and full and concentrated as they can get it. For all its faroucheness, it is an unmistakeable high-class drink — de- finitely for meal situations. Finally, a chateauneuf(6) which is all there, ready to drink, and a very respect- able example of one of the classic wines of France. The only thing which is disagree- able about it is the price, at £9.13 the bottle. Few of the panel were enthusiastic, and there was even the noise of pilgering to be heard when the price was discussed, but I am afraid this is the• sort of price people must expect to pay who insist on buying respectable examples of the classic wines of France, rather than following the wonder- ful and romantic Australian paths which I have been blazing for them, with some effort, these last five years.

Inclusion of the Chateauneuf les Cabanes at its bestial price of £9.13 forces the price of the mixed case above the £5 mark to £5.31 the bottle, which is intensely irritating as it was running at £4.55 before the addition of number 6. But there are some excellent wines here, and people can order them by the case without risk.