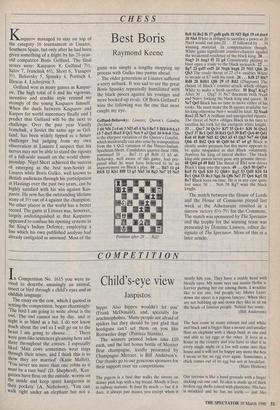 Kasparov managed to stay on top of the category 16 tournament in Linares, Southern Spain, but only after he had been given something of a fright by his 21-year- old compatriot Boris Gelfand. The final scores were: Kasparov 8, Gelfand 71/2, Salov 7, Ivanchuk 61/2, Short 6, Yusupov 51/2, Beliaysky 5, Spassky 4, Portisch 4, Illescas 4, Ljubojevic 3.

Gelfand won as many games as Kaspar- ov. The high total of 6 and his vigorous, inventive and erudite style remind me strongly of the young Kasparov himself. When the duels between Kasparov and Karpov for world supremacy finally end I predict that Gelfand will be the next to challenge. Over the past year Vassily Ivanchuk, a Soviet the same age as Gel- fand, has been widely tipped as a future challenger but judging from my own observation at Linares I suspect that his nerves may not be able to stand the rigours of a full-scale assault on the world cham- pionship. Nigel Short achieved the success of emerging as the best non-Soviet at Linares while Boris Gulko, well known to British audiences through his participation at Hastings over the past two years, can be highly satisfied with his win against Kas- parov. He now has the outstanding lifetime score of 31/2 out of 4 against the champion. No other player in the world has a better record. The game at Linares was, however, largely undistinguished in that Kasparov appeared to confuse his opening systems in the King's Indian Defence, employing a line which his own published analysis had already castigated as unsound. Most of the

game was simply a lengthy mopping up process with Gulko two pawns ahead.

The older generation at Linares suffered a sorry setback. It was sad to see the great Boris Spassky repeatedly humiliated with the black pieces against his younger and more booked-up rivals. Of Boris Gelfand's wins the following was the one that most caught my eye.

The match between the House of Lords and the House of Commons played last week at the Athenaeum resulted in a narrow victory 81/2-71/2 for the Commons. The match was sponsored by The Spectator and the trophy for the winning team was presented by Dominic Lawson, editor de- signate of The Spectator. More of this in a later article.