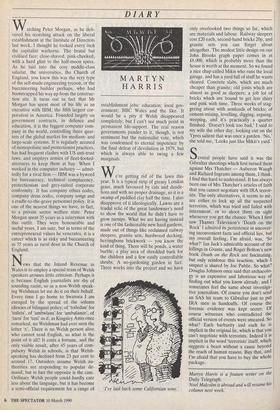 MARTYN HARRIS Watching Peter Morgan, as he deli- vered his scorching attack on the liberal establishment at the Institute of Directors last week, I thought he looked every inch the capitalist warhorse. The brutal but civilised face: close-shaved, pink-cheeked, with a hard glint to the half-moon specs. As he laid into the cosy middle-class salariat, the universities, the Church of England, you knew this was the very type of the self-made engineering tycoon, or the buccaneering builder perhaps, who had bootstrapped his way up from the construc- tion site. It turns out in fact that Mr Morgan has spent most of his life as an executive with IBM, the fifth largest cor- poration in America. Founded largely on government contracts, in defence and education, it is the biggest computer com- pany in the world, controlling three quar- ters of the global market for medium- and large-scale systems. It is regularly accused of monopolistic and protectionist practices, has had frequent clashes with US anti-trust laws, and employs armies of fleet-footed- attorneys to keep them at bay. When I worked in the computer industry — admit- tedly for a rival firm — IBM was a byword for bureaucracy, technical complacency, protectionism and grey-suited corporate conformity. It has company ethics codes, company dress codes, company songs and a cradle-to-the-grave personnel policy. It is one of the nearest things we have, in fact, to a private sector welfare state. Peter Morgan spent 35 years as a salaryman with this outfit. They were honourable and useful years, I am sure, but in terms of the entrepreneurial values he venerates, it is a career which is as risky and buccaneering as 35 years as rural dean in the Church of England.

News that the Inland Revenue in Wales is to employ a special team of Welsh speakers arouses little criticism. Perhaps it is because English journalists are shy of sounding racist, so as a non-Welsh speak- ing Welshman let me do it on their behalf. Every time I go home to Swansea I am enraged by the spread of the solemn idiocies of bilingual policy; of loiledau' for `toilets', of 'ambwlans' for 'ambulance', of `tacsi' for 'taxi' as if, as Kingsley Amis once remarked, no Welshman had ever seen the letter 'x'. There is no Welsh person alive who cannot read English, so what is the point of it all? It costs a fortune, and the only visible result, after 45 years of com- pulsory Welsh in schools, is that Welsh- speaking has declined from 23 per cent to around 17. Outsiders assume Welsh au- thorities are responding to popular de- mand, but in fact the opposite is the case. Ordinary Welsh people could hardly care less about the language, but it has become a semi-official requirement for a range of

establishment jobs: education; local gov- ernment; BBC Wales and the like. It would be a pity if Welsh disappeared completely, but I can't see much point in permanent life-support. The real reason governments pander to it, though, is not sentiment but the nationalist vote, which was condemned to eternal impotence by the final defeat of devolution in 1979, but which is always able to swing a few marginals.

We're getting rid of the lawn this year. It is a typical strip of greasy London grass, much favoured by cats and dande- lions and with no proper drainage, so it is a swamp of puddled clay half the time. I also disapprove of it ideologically. Lawns are a feudal relic of the great landowner's need to show the world that he didn't have to grow turnips. What we are having instead is one of the fashionable new hard gardens, made out of things like reclaimed railway sleepers, granite sets, hardwood decking, herringbone brickwork — you know the kind of thing. There will be ponds, a water burble, a play area of shredded bark for the children and a few easily controllable shrubs. A no-gardening garden in fact. Three weeks into the project and we have `I've laid back some Californian wine. '

only overlooked two things so far, which are materials and labour. Railway sleepers cost £20 each, second-hand bricks 20p, and granite sets you can forget about altogether. The modest little design on our John Brooks graph paper comes in at £8,000, which is probably more than the house is worth at the moment. So we found a nice chap called Mikis who runs the local garage, and has a yard full of stuff he wants cleared. Concrete slabs, which are much cheaper than granite; old joists which are almost as good as sleepeis; a job lot of bricks which are bound to get less shiny and pink with time. Three weeks of stag- gering about with armloads of bricks; of cement-mixing, levelling, digging, arguing, weeping, and it's practically a quarter finished. 'Doesn't look too bad,' I said to my wife the other day, looking out on the Ypres salient that was once a garden. 'No,' she told me, 'Looks just like Mikis's yard.'

Several people have said it was the Gibraltar shootings which first turned them against Mrs Thatcher — Auberon Waugh and Richard Ingrams among them, I think. I find this hard to understand. It has always been one of Mrs Thatcher's articles of faith that you cannot negotiate with IRA terror- ists. The only alternatives, it seems to me, are either to lock up all the suspected terrorists, which was tried and failed with internment, or to shoot them on sight whenever you get the chance. When I first saw Thames Television's 'Death on the Rock' I admired its persistence in uncover- ing inconvenient facts and official lies, but my overall feeling, I'm afraid, was, `So what?' Ian Jack's admirable account of the killings in Granta, and Roger Bolton's new book Death on the Rock are fascinating, but only reinforce this reaction, which I suspect is shared by Joe Public. So what? Douglas Johnson once said that archaeolo- gy is an expensive and laborious way of finding out what you know already, and I sometimes feel the same about investiga- tive journalism. Of course you don't send an SAS hit team to Gibraltar just to put IRA men in handcuffs. Of course the forensic evidence was kept secret. Of course witnesses who contradicted the official version of events were smeared. So what? Each barbarity and each lie is implicit in the original lie, which is that you can't negotiate with terrorists. Indeed it is implicit in the word 'terrorists' itself, which suggests a beast without a cause beyond the reach of human reason. Buy that, and I'm afraid that you have to buy the whole package.

Martyn Harris is a feature writer on the Daily Telegraph. Noel Malcolm is abroad and will resume his column next week.