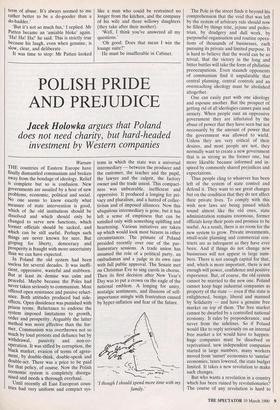 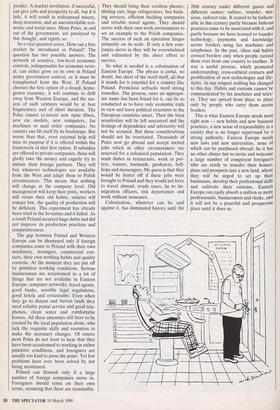 does not need charity, but hard-headed investment by Western companies

Warsaw THE countries of Eastern Europe have finally dismantled communism and broken away from the bondage of ideology. Relief is complete but so is confusion. New governments are assailed by a host of new problems, economic, political and social. No one seems to know exactly what measure of state intervention is good, which of the old institutions should be dissolved and which should only be changed to serve new functions, which former officials should be sacked, and which can be still useful. Perhaps such things are never known for sure. But groping for liberty, democracy and prosperity is fraught with more uncertainty than we can have expected. In Poland the old system had been useless for several decades. It was ineffi- cient, oppressive, wasteful and stubborn. But at least its demise was calm and peaceful. Maybe because the Poles had never taken seriously to communism. Most offered open resistance and passive reluct- ance. Both attitudes produced bad side- effects. Open dissidence was punished with prison terms. Reluctance to endorse the system imposed limitations to growth, order and prosperity. Arguably the latter method was more effective than the for- mer. Communism was overthrown not so much by loud protests and defiance but by withdrawal, passivity and non-co- operation. It was stifled by corruption, the black market, evasion of terms of agree- ment, by double-think, double-speak and double-act. There was a price to be paid for that policy, of course. Now the Polish economic system is completely disorga- nised and needs a thorough overhaul. Until recently all East European coun- tries had very uniform and compact sys- tems in which the state was a universal intermediary — between the producer and the customer, the teacher and the pupil, the lawyer and the culprit, the factory owner and the trade union. This compact- ness was unbearable, inefficient and oppressive. It produced a longing for pri- vacy and pluralism, and a hatred of collec- tivism and of imposed alliances. Now this ubiquitous intermediary is gone, but it has left a sense of emptiness that can be satisfied only with something uplifting and heartening. Various initiatives are taken up which would look most bizarre in other circumstances. The primate of Poland presided recently over one of the par- liamentary sessions. A trade union has assumed the role of a political party, an ombudsman and a judge in its own case with full public approval. The Senate met on Christmas Eve to sing carols in chorus. Then its first decision after New Year's Day was to put a crown on the eagle of the national emblem. A longing for unity, nostalgic sentiments, and illusions of self- importance mingle with frustration caused by hyper-inflation and fear of the future.

`I though I should spend more time with my family.' The Pole in the street finds it beyond his comprehension that the void that was left by the system of arbitrary rule should now be filled by things trite, jejune and pedes- trian, by drudgery and dull work, by purposeful organisation and routine opera- tions of thousands of businesses, each pursuing its private and limited purpose. It is hard to believe that the world can be so trivial, that the victory in the long and bitter battles will take the form of philistine preoccupations. Even staunch opponents of communism find it unpalatable that central planning, central controls and an overreaching ideology must be abolished altogether.

One can easily part with one ideology and espouse another. But the prospect of getting rid of all ideologies causes pain and anxiety. When people oust an oppressive government they are infuriated by the abuse of power that they have seen but not necessarily by the amount of power that the government was allowed to wield. Unless they are very critical of their desires, and most people are not, they normally want to create a new government that is as strong as the former one, but more likeable because informed and in- spired by commonly shared prejudices and expectations.

Thus people cling to whatever has been left of the system of state control and defend it. They want to see great changes but on the condition that they do not affect their private lives. To comply with this wish new laws are being passed which sound almost like the old ones, state administration remains enormous, former officials keep their posts and promise to be useful. As a result, there is no room for the new system to grow. Private investments, small-scale planning and commercial con- tracts are as infrequent as they have ever been. And if things do not change new businesses will not appear in large num- bers. There is not enough capital for that, and, which is more important, there is not enough will power, confidence and positive experience. But, of course, the old system cannot be married to the new one_ Poland cannot keep huge industrial companies as property of the state — even if this state is enlightened, benign, liberal and manned by Solidarity — and have a genuine free market on top of them. The free market cannot be dwarfed by a controlled national economy. It rules by preponderance, and never from the sidelines. So if Poland would like to reply seriously on an internal free market a lot would have to happen: huge companies must be, dissolved or reprivatised, new independent companies started in large numbers, many workers moved from 'sunset' economies to 'sunrise' economies, taxes lowered, the state budget limited. It takes a new revolution to make such changes.

But who wants a revolution in a country which .has been ruined by revolutionaries? The course of any revolution is hard to predict. A market revolution, if successful, can give jobs and prosperity to all, but if it fails, it will result in widespread misery, deep recession, and an uncontrollable eco- nomic and social mess. Many Poles, in and out of the government, are paralysed by this thought, and rightly so.

So a vital question arises. How can a free market be introduced in Poland? The question has two possible answers. The network of sensitive, low-level economic controls, indispensable for economic reviv- al, can either grow on its own in Poland under government control, or it must be transplanted from the West. If Poland chooses the first option of a closed, home- grown economy, it will continue to drift away from Western Europe, and the suc- cess of such ventures would be at best fragmentary and of short duration. The Poles cannot re-invent new optic fibres, new car models, new computers, fax machines or mail order companies. No country can lift itself by its bootstraps. But worse than that, even external help will miss its purpose if it is offered within the framework of that first option. If subsidies are offered to private companies, these will gladly take the money and eagerly try to imitate their foreign partners. They will buy whatever technologies are available from the West and adapt them to Polish circumstances. This means that nothing will change at the company level. Old management will keep their posts, workers will retain their old habits, salaries will remain low, the quality of production will be deficient. This experiment has already been tried in the Seventies and it failed. As a result Poland incurred huge debts and did not improve its production practices and competitiveness.

The gap between Poland and Western Europe can be shortened only if foreign companies come to Poland with their own machinery, managers, commercial con- tacts, their own working habits and quality controls. At the moment they are put off by primitive working conditions. Serious businessmen are accustomed to a lot of things that are not available in Eastern Europe: computer networks, travel agents, good banks, sensible legal regulations, good hotels and restaurants. Even when they go to distant and barren lands they need reliable postal service and good tele- phones, clean water and comfortable houses. All these amenities still have to be created by the local population alone, who lack the requisite skills and resources to make the necessary changes. Of course most Poles do not want to hear that they have been accustomed to working in rather primitive conditions, and foreigners are usually too kind to press the point. Yet few problems have ever been solved by not being mentioned.

Poland can flourish only if a large number of foreign companies move in. Foreigners should come on their own terms, assuming that these are reasonable. They should bring their cordless phones, shining cars, huge refrigerators, fast bank- ing services, efficient building companies and reliable travel agents. They should arrive with their own work environment to set an example to the Polish companies. The success of such an operation hinges primarily on its scale. If only a few com- panies move in they will be overwhelmed and exhausted by the sheer effort to survive.

So what is needed is a colonisation of Eastern Europe. The phrase is awful, no doubt, but short of the word itself, all that it stands for is essential for a country like Poland. Pernicious setbacks need strong remedies. The process, once an appropri- ate name has been found for it, can be so conducted as to have only economic ends in view and leave political structures in the European countries intact. Then the ideal sensitivities will be left unscarred and the feelings of dependence and inferiority will not be aroused. But these considerations should not be overstated. Thousands of Poles now go abroad and accept menial jobs which in other circumstances are reserved for a colonised population. They wash dishes in restaurants, work as por- ters, waiters, barmaids, gardeners, bell- hops and messengers. My guess is that they would be better off if these jobs were brought to Poland and they would not have to travel abroad, evade taxes, lie to im- migration officers, risk deportation and work without insurance.

Colonisation, whatever can be said against it, has dominated history until the 20th century under different guises and different names: culture, transfer, mis- sions, indirect rule. It ceased to be fashion- able in this century partly because hideous practices came to be associated with it, and partly because we have learned to transfer technology, payments and knowledge across borders using fax machines and telephones. In the past, ideas and habits crossed borders only when people carried them over from one country to another. It was a useful process, which promoted understanding, cross-cultural contacts and proliferation of new technologies and life- styles. In one respect nothing has changed to this day. Habits and customs cannot be communicated by fax machines and telex- es. They are spread from place to place only by people who carry them across borders.

This is what Eastern Europe needs most right now — new habits and new business practices, a new sense of responsibility in a society that is no longer supervised by a strong authority. Eastern Europe needs new laws and new universities, none of which can be purchased abroad. So it has no other choice but to invite and welcome a large number of competent foreigners who are ready to transfer their homes, plans and prospects into a new land, where they will be urged to set up their businesses, develop their professional skills and cultivate their customs. Eastern Europe can easily absorb a million or more professionals, businessmen and clerks, and it will not be a peaceful and prosperous place until it does so.