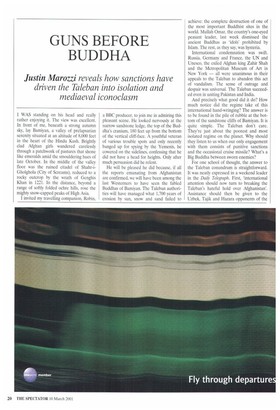 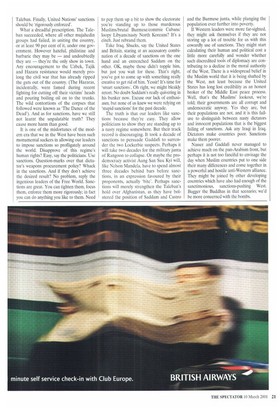 Justin Marozzi reveals how sanctions have

driven the Taleban into isolation and mediaeval iconoclasm

I WAS standing on his head and really rather enjoying it. The view was excellent. In front of me, beneath a strong autumn sky, lay Bamiyan, a valley of prelapsarian serenity situated at an altitude of 8,000 feet in the heart of the Hindu Kush. Brightly clad Afghan girls wandered carelessly through a patchwork of pastures that shone like emeralds amid the smouldering hues of late October. In the middle of the valley floor was the ruined citadel of Shahr-iGholghola (City of Screams), reduced to a rocky outcrop by the wrath of Genghis Khan in 1221. In the distance, beyond a range of softly folded ochre hills, rose the mighty snow-capped peaks of High Asia.

I invited my travelling companion, Robin, a BBC producer, to join me in admiring this pleasant scene. He looked nervously at the narrow sandstone ledge, the top of the Buddha's cranium, 180 feet up from the bottom of the vertical cliff-face. A youthful veteran of various trouble spots and only recently banged up for spying by the Yemenis, he cowered on the sidelines, confessing that he did not have a head for heights. Only after much persuasion did he relent.

He will be pleased he did because, if all the reports emanating from Afghanistan are confirmed, we will have been among the last Westerners to have seen the fabled Buddhas of Bamiyan. The Taleban authorities will have managed what 1,700 years of erosion by sun, snow and sand failed to achieve: the complete destruction of one of the most important Buddhist sites in the world, Mullah Omar, the country's one-eyed peasant leader, last week dismissed the ancient Buddhas as 'idols' prohibited by Islam. The rest, as they say, was hysteria.

International condemnation was swift. Russia, Germany and France, the UN and Unesco, the exiled Afghan king Zahir Shah and the Metropolitan Museum of Art in New York — all were unanimous in their appeals to the Taleban to abandon this act of vandalism. The sense of outrage and despair was universal. The Taleban succeeded even in uniting Pakistan and India.

And precisely what good did it do? How much notice did the regime take of this International hand-wringing? The answer is to be found in the pile of rubble at the bottom of the sandstone cliffs of Bamiyan. It is quite simple. The Taleban don't care. They're just about the poorest and most isolated regime on the planet. Why should they listen to us when our only engagement with them consists of punitive sanctions and the occasional cruise missile? What's a Big Buddha between sworn enemies?

For one school of thought, the answer to the Taleban conundrum is straightforward. It was neatly expressed in a weekend leader in the Daily Telegraph. First, 'international attention should now turn to breaking the Taleban's hateful hold over Afghanistan'. Assistance should then be given to the Uzbek, Tajik and Hazara opponents of the

What a dreadful prescription. The Taleban succeeded, where all other mujahedin groups had failed, in uniting the country, or at least 90 per cent of it, under one government. However hateful, philistine and barbaric they may be — and undoubtedly they are — they're the only show in town. Any encouragement to the Uzbek, Tajik and Hazara resistance would merely prolong the civil war that has already ripped the guts out of the country. (The Hazaras, incidentally, were famed during recent fighting for cutting off their victims' heads and pouring boiling oil on to the trunks. The wild contortions of the corpses that followed were known as 'The Dance of the Dead'). And as for sanctions, have we still not learnt the unpalatable truth? They cause more harm than good.

It is one of the misfortunes of the modern era that we in the West have been such monumental suckers in allowing our leaders to impose sanctions so profligately around the world. Disapprove of this regime's human rights? Easy, say the politicians. Use sanctions. Question-marks over that dictator's weapons procurement policy? Whack in the sanctions. And if they don't achieve the desired result? No problem, reply the ingenious leaders of the Free World. Sanctions are great. You can tighten them, focus them, enforce them more rigorously; in fact you can do anything you like to them. Need to pep them up a bit to show the electorate you're standing up to those murderous Muslims/brutal Burmese/commie Cubans/ loopy Libyans/nasty North Koreans? It's a cinch. Just rebrand them.

Take Iraq. Shucks, say the United States and Britain, staring at an accusatory combination of a decade of sanctions on the one hand and an entrenched Saddam on the other. OK, maybe those didn't topple him, but just you wait for these. That's right, you've got to come up with something really creative to get rid of him. Yessir! It's time for 'smart sanctions'. Oh right, we might bleakly retort. No doubt Saddam's really quivering in his bunker now. Excuse our lack of enthusiasm, but none of us knew we were relying on 'stupid sanctions' for the past decade.

The truth is that our leaders like sanctions because they're easy. They allow politicians to show they are standing up to a nasty regime somewhere. But their track record is discouraging. It took a decade of sanctions to persuade Gaddafi to surrender the two Lockerbie suspects. Perhaps it will take two decades for the military junta of Rangoon to collapse. Or maybe the prodemocracy activist Aung San Suu Kyi will, like Nelson Mandela. have to spend almost three decades behind bars before sanctions, in an expression favoured by their proponents, actually 'bite'. Perhaps sanctions will merely strengthen the Taleban's hold over Afghanistan, as they have bolstered the position of Saddam and Castro and the Burmese junta, while plunging the population ever further into poverty.

If Western leaders were more far-sighted, they might ask themselves if they are not storing up a lot of trouble for us with this cowardly use of sanctions. They might start calculating their human and political cost a little more carefully and wonder whether such discredited tools of diplomacy are contributing to a decline in the moral authority of the West. There is a widespread belief in the Muslim world that it is being shafted by the West, not least because the United States has long lost credibility as an honest broker of the Middle East peace process. Well, that's the Muslims' lookout, we're told; their governments are all corrupt and undemocratic anyway. Yes they are, but their populations are not, and it is this failure to distinguish between nasty dictators and innocent populations that is the biggest failing of sanctions. Ask any Iraqi in Iraq. Dictators make countries poor. Sanctions make them poorer.

Nasser and Gaddafi never managed to achieve much on the pan-Arabism front, but perhaps it is not too fanciful to envisage the day when Muslim countries put to one side their many differences and come together in a powerful and hostile anti-Western alliance. They might be joined by other developing countries which have also had enough of the sanctimonious, sanctions-pushing West. Bugger the Buddhas in that scenario; we'd be more concerned with the bombs.