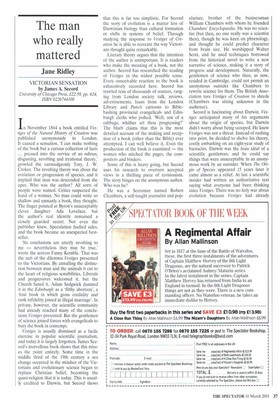 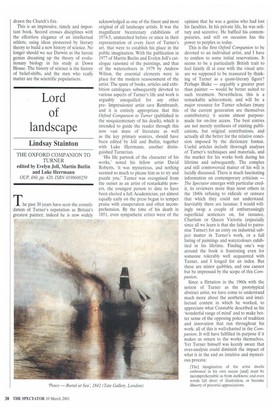 The man who really mattered

In November 1844 a book entitled Vestiges of the Natural History of Creation was published anonymously in London. It caused a sensation. 'I can make nothing of the book but a curious collection of facts ... pressed into the service of an odious, disgusting, revolting and irrational theory,' growled the curmudgeonly Tory, J. W. Croker. The revolting theory was about the evolution or progression of species, and it implied that man was descended from the apes. Who was the author? All sorts of people were named. Critics suspected the hand of a woman. No man could write so shallow and unmanly a book, they thought. The finger pointed at Byron's unacceptably clever daughter Ada Lovelace, but the author's real identity remained a closely guarded secret. Not even the publisher knew. Speculation fuelled sales, and the book became an unexpected bestseller.

'Its conclusions are utterly revolting to me — nevertheless they may be true,' wrote the actress Fanny Kemble. That was the nub of the dilemma Vestiges presented to the Victorians. By annulling the distinction between man and the animals it cut to the heart of religious sensibilities. Liberals and progressives welcomed it, but the Church hated it. Adam Sedgwick damned it in the Edinburgh as a 'filthy abortion', a 'foul book in which gross credulity and rank infidelity joined in illegal marriage'. In private, however, the scientific community had already reached many of the conclusions Vestiges presented. But the gentlemen of science joined forces with evangelicals to bury the book in contempt.

Vestiges is usually dismissed as a facile exercise in popular scientific journalism, and today it is largely forgotten. James Secord's marvellous book shows that this misses the point entirely. Some time in the middle third of the 19th century a sea change occurred in the mindset of the Victorians and evolutionary science began to replace Christian belief, becoming the quasi-religion that it is today. This is usually credited to Darwin, but Secord shows that this is far too simplistic. For Secord the story of evolution is a matter less of Darwinian biology than cultural formation or shifts in systems of belief. Through studying the response to Vestiges of Creation he is able to recreate the way Victorians thought quite remarkably.

Literary theory argues that the intention of the author is unimportant. It is readers who make the meaning of a book, not the author. Secord has researched the reading of Vestiges in the widest possible sense. Every conceivable reaction to the book is exhaustively recorded here. Secord has trawled tens of thousands of sources, ranging from London society talk, reviews, advertisements, loans from the London Library and Punch cartoons to Biblebashing provincial evangelicals and Edinburgh clerks who joshed. 'Well, son of a cabbage, whither art thou progressing?' The blurb claims that this is the most detailed account of the making and reception of a book (other than the Bible) ever attempted. I can well believe it. Even the production of the book is examined — the women who stitched the pages, the compositors and binders.

Some of this is heavy going, but Secord uses his research to overturn accepted views in a thrilling piece of revisionism. The story hinges on the anonymous author. Who was he?

He was a Scotsman named Robert Chambers, a self-taught journalist and pop ulariser, brother of the businessman William Chambers with whom he founded Chambers' Encyclopaedia. He was no scientist (but then, no one really was a scientist then), though he was keen on phrenology, and thought he could predict character from brain size. He worshipped Walter Scott, and he used techniques borrowed from the historical novel to write a new narrative of science, making it a story of progress and development. Naturally, the gentlemen of science who then, as now, resided in Cambridge, could not permit an anonymous outsider like Chambers to rewrite science for them. The British Association tore Vestiges of Creation to shreds (Chambers was sitting unknown in the audience).

Secord is fascinating about Darwin. Vestiges anticipated many of his arguments about the origin of species, but Darwin didn't worry about being scooped. He knew Vestiges was not a threat. Instead of rushing into print, he decided to shelve his theory, coolly embarking on an eight-year study of barnacles. Darwin was the beau ide.al of a scientific gentleman, and he could say things that were unacceptable in an anonymous work by an outsider. When The Origin of Species appeared 15 years later it came almost as a relief, At last a scientific insider had written an authoritative text saying what everyone had been thinking since Vestiges. There was no holy war about evolution because Vestiges had already

This is an impressive, timely and important book. Secord crosses disciplines with the effortless elegance of an intellectual athlete, using ideas pioneered by literary theory to build a new history of science. No longer should we see Darwin as the heroic genius dreaming up the theory of evolutionary biology in his study at Down House. The history of science is the history of belief-shifts, and the men who really matter are the scientific popularisers.