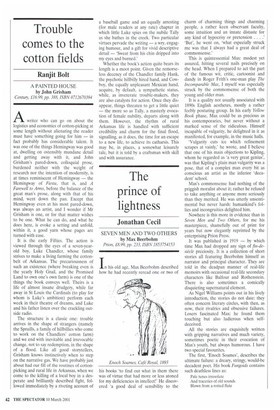 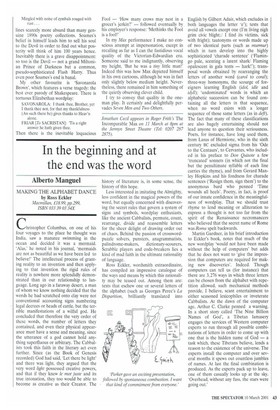 The prince of lightness

SEVEN MEN AND TWO OTHERS by Max Beerbohm

In his old age, Max Beerbohm described how he had recently reread one or two of

his books 'to find out what in them there was of virtue that had more or less atoned for my deficiencies in intellect!' He discovered 'a good deal of sensibility to the charm of charming things and charming people, a rather keen observant faculty, some intuition and an innate distaste for any kind of hypocrisy or pretension . . . 'But', he went on, 'what especially struck me was that I always had a great deal of commonsense.'

This is quintessential Max: modest yet assured, hitting several nails precisely on the head. When I prepared to act the part of the famous wit, critic, cartoonist and dandy in Roger Frith's one-man play The Incomparable Max, I myself was especially struck by the commonsense of both the young and older man.

It is a quality not usually associated with 1890s English aesthetes, mostly a rather feebly posturing group. In his early Yellow Book phase, Max could be as precious as his contemporaries, but never without a marked sense of the ridiculous. Himself incapable of vulgarity, he delighted in it as manifested, for example, in the music halls.

'Vulgarity cuts ice which refinement scrapes at vainly,' he wrote, and I believe that one of his main objections to Kipling, whom he regarded as 'a very great genius', was that Kipling's plain man vulgarity was a pose, that of a complex man every bit as conscious an artist as the inferior 'decadent' school.

Max's commonsense had nothing of the priggish moralist about it; rather he refused to take anything or anyone more seriously than they merited. He was utterly unsentimental but never harsh: humankind's follies and incongruities delighted him.

Nowhere is this more in evidence than in Seven Men and Two Others, for me his masterpiece, shamefully out of print for years but now elegantly reprinted by the enterprising Prion Press.

It was published in 1919 — by which time Max had dropped any sign of fin-desiècle preciosity. It is a collection of short stories all featuring Beerbohm himself as narrator and principal character. They are told in the deadpan manner of real-life memoirs with occasional real-life secondary characters like Balfour and Rothenstein. There is also sometimes a comically disquieting supernatural element.

As Nigel Williams points out in his lively introduction, the stories do not date: they often concern literary circles, with then, as now, their rivalries and obsessive failures. Losers fascinated Max: he found them touching but also ludicrous when selfdeceived.

All the stories are exquisitely written with gripping narratives and much variety, sometimes poetic in their evocation of Max's youth, but always humorous. I have two special favourites.

Pale tunes irresolute And traceries of old sounds Blown from a rotted flute Mingled with noise of cymbals rouged with rust ...

lines scarcely more absurd than many genuine 1890s poetry collections. Soarnes's belief in himself leads him to sell his soul to the Devil in order to find out what posterity will think of him 100 years hence. Inevitably there is a grave disappointment: so too is the Devil — not a grand Miltonian Prince of Darkness but a common, pseudo-sophisticated Flash Harry. Thus even poor Soames's end is banal.

My other favourite is `Savonarola Brown', which features a verse tragedy: the best ever parody of Shakespeare. There is tortuous Elizabethan wordplay: SAVONAROLA: I thank thee, Brother, yet I thank thee not, for that my thankfulness (An such there be) gives thanks to Heav'n

FRIAR [To SACRISTAN]: 'Tis a right answer he hath given thee.

Then there is the inevitable loquacious Fool — 'How many crows may nest in a grocer's jerkin?' — followed eventually by his employer's response: 'Methinks the Fool is a fool!'

In my Max performance I make no conscious attempt at impersonation, except in recalling as far as I can the fastidious vocal quality of the Victorian-Edwardian era. Someone said to me indignantly, observing my height, 'But he was a tiny little man!' Indeed this was how Max depicted himself in his own cartoons, although he was in fact only slightly below medium height. Nevertheless, there remained in him something of the quietly observing clever child.

I try to convey that quality in the oneman play. It certainly and delightfully pervades Seven Men and Two Others.