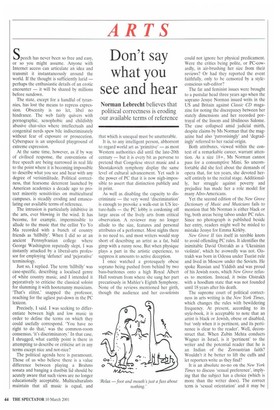 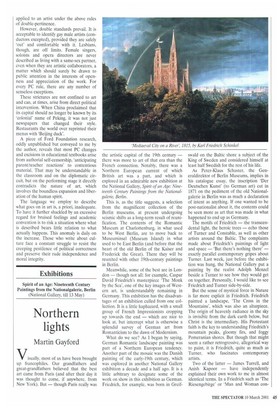 Don't say what you see and hear

The state, except for a handful of tyrannies, has lost the means to repress expression. Obscenity is no let, libel no hindrance. The web fairly quivers with pornographic, xenophobic and childishly abusive chat-sites where intellectuals and congenital nerds spew bile indiscriminately without fear of exposure or prosecution. Cyberspace is an unpoliced playground of extreme expression.

At the same time, however, as if by way of civilised response, the conventions of free speech are being narrowed in real life to the point where it is becoming impossible to describe what you see and hear with any degree of verisimilitude. Political correctness, that fearsome deterrent launched by American academics a decade ago to protect minority sensitivities on multicultural campuses, is steadily eroding and emasculating our available terms of reference.

The intrusion is particularly inhibitive in the arts, ever blowing in the wind. It has become, for example, impermissible to allude to the music that the cellist Yo Yo Ma recorded with a bunch of country friends as 'hillbilly'. When I did so at an ancient Pennsylvanian college where George Washington reputedly slept. I was instantly attacked by a liberal-arts professor for employing 'defunct' and 'pejorative' terminology.

Just so, I replied. The term 'hillbilly' was case-specific, describing a localised genre of white country music, and I intended it pejoratively to criticise the classical soloist for slumming it with hootenanny musicians. 'That's elitist,' snapped the professor, reaching for the ugliest put-down in the PC lexicon.

Precisely, I said. I was seeking to differentiate between high and low music in order to define the terms on which they could usefully correspond. 'You have no right to do that,' was the common-room consensus, 'it's discriminatory.' In that case, I shrugged, what earthly point is there in attempting to describe or criticise art in any terms except nice and not-nice?

The political agenda here is paramount. Those of us who believe there is a value difference between playing a 13rahms sonata and banging a dustbin lid should be acutely aware that such views are no longer educationally acceptable. Multiculturalists maintain that all music is equal, and that which is unequal must be unutterable.

It is, to any intelligent person, abhorrent to regard world art as 'primitive' — as most Western authorities did until the late-20th century — but it is every bit as perverse to pretend that Congolese street music and a Shostakovich symphony display the same level of cultural advancement. Yet such is the power of PC that it is now nigh-impossible to assert that distinction publicly and in print.

As well as disabling the capacity to discriminate — the very word 'discrimination' is enough to provoke a walk-out in US lecture-halls — the PC lobby is cordoning off large areas of the lively arts from critical observation. A reviewer may no longer allude to the size, features and personal attributes of a performer. Most nights there is no need to, and most writers would stop short of describing an artist as a fat, bald gimp with a runny nose. But when physique plays a part in the artistic experience, to suppress it amounts to active deception.

I once watched a grotesquely obese soprano being pushed from behind by two bass-baritones onto a high Royal Albert Hall rostrum from where she sang her part precariously in Mahler's Eighth Symphony. None of the reviews mentioned her girth, though the audience and her co-soloists could not ignore her physical predicament. Were the critics being polite, or PC-cowardly, in air-brushing her size from their reviews? Or had they reported the event faithfully, only to be censored by a styleconscious sub-editor?

The fat and feminist issues were brought to a pustular head three years ago when the soprano Jessye Norman issued writs in the US and Britain against Classic CD magazine for noting the discrepancy between her stately dimensions and her recorded portrayal of the lissom and libidinous Salome. The case collapsed amid judicial mirth, despite claims by Ms Norman that the magazine had also 'patronisingly' and 'degradingly' referred to her racial origin.

Both attributes, viewed within the context of a remarkable career, warrant attention. As a size 18+, Ms Norman cannot pass for a consumptive Mimi. So uncomfortable did she feel about the demands of opera that, for ten years, she devoted herself entirely to the recital stage. Additionally, her struggle against poverty and prejudice has made her a role model for many Afro-Americans.

Yet the second edition of the New Grove Dictionary of Music and Musicians fails to mention that Ms Norman is either black or big, both areas being taboo under PC rules. Since no photograph is published beside her entry, readers might well be misled to mistake Jessye for Emma Kirkby.

New Grove II ties itself in terrible knots to avoid offending PC rules. It identifies the inimitable David Oistrakh as a 'Ukrainian violinist', which he avowedly was not. Oistrakh was born in Odessa under Tsarist rule and lived in Moscow under the Soviets. He spoke Russian and Yiddish and was proud of his Jewish roots, which New Grove refuses to mention. Instead, it twins Oistrakh with a hoodlum state that was not founded until 18 years after his death.

The supreme court of political correctness in arts writing is the New York Times, which changes the rules with bewildering frequency. At present, according to its style-book, it is acceptable to note that an artist is black or Jewish, obese or disabled, but 'only when it is pertinent, and its pertinence is clear to the reader'. Well, deconstruct that. When Zubin Mehta conducts Wagner in Israel, is it 'pertinent' to the writer and the potential reader that he is an Indian of the Zoroastrian faith? Wouldn't it be better to lift the cuffs and let reporters write as they find?

It is an absolute no-no on the New York Times to discuss 'sexual preference', implying that the subject has a choice (which is more than the writer does). The correct term is 'sexual orientation' and it may be applied to an artist under the above rules of double-pertinence.

However, double standards prevail. It is acceptable to identify gay male artists (conductors excepted), provided they are safely 'out' and comfortable with it. Lesbians, though, are off limits. Female singers, soloists and opera directors are never described as living with a same-sex partner, even when they are artistic collaborators, a matter which should surely be drawn to public attention in the interests of openness and appreciation of the work. For every PC rule, there are any number of senseless exceptions.

These strictures are not confined to art and can, at times, arise from direct political intervention. When China proclaimed that its capital should no longer be known by its 'colonial' name of Peking, it was not just newspapers that changed their style. Restaurants the world over reprinted their menus with 'Beijing duck'.

A piece of Ford Foundation research, oddly unpublished but conveyed to me by the author, reveals that most PC changes and excisions in educational textbooks arise from authorial self-censorship, 'anticipating parent/teacher reactions' to contentious material. That may be understandable in the classroom and on the diplomatic circuit, but on the performing stage it directly contradicts the nature of art, which involves the boundless expansion and liberation of the human spirit.

The language we employ to describe what goes on in art is, a priori, inadequate. To have it further shackled by an excessive regard for bruised feelings and academic convention is to risk a situation where what is described bears little relation to what actually happens. This anomaly is daily on the increase. Those who write about culture face a constant struggle to resist the creeping pestilence of political correctness and preserve their rude independence and moral integrity.