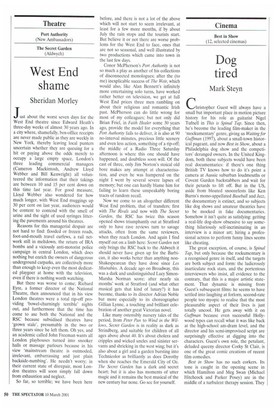 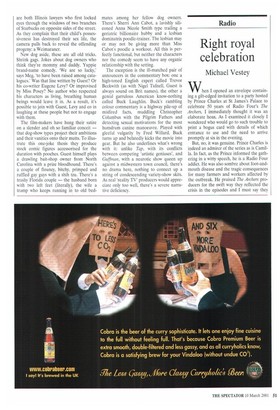 Christopher Guest will always have a small but important place in motion picture history for his role as guitarist Nigel Tufnell in This is Spinal Tap. Since then, he's become the leading film-maker in the Inockumentaty' genre, giving us Waiting for Guffinan (1997), about a small-town historical pageant, and now Best in Show, about a Philadelphia dog show and the competitors' deranged owners. In the United Kingdom, both these subjects would have been real documentaries: if there's one thing British TV knows how to do it's point a camera at Aussie suburban loudmouths or Covent Garden backstabbers and wait for their petards to lift off. But in the US, aside from bloated snoozefests like Ken Burns's mono-appellated Baseball and Jazz, the documentary is extinct, and so subjects like dog shows and amateur theatrics have to be mocked in fake documentaries. Somehow it isn't quite as satisfying: getting a real-life dog-show obsessive to say something hilariously self-incriminating in an interview is a minor art; hiring a professional actress to perform funny lines seems like cheating.

The great exception, of course, is Spinal Tap, but only because the rockumentary is a recognised genre in itself, and the targets are both subject and form: the ludicrously inarticulate rock stars, and the portentous interviewers who insist, all evidence to the contrary, that this is a major artistic statement. That dynamic is missing from Guest's subsequent films: he seems to have settled into laughing at forlorn, second-rate people too myopic to realise that the most pleasurable aspect of their lives is just totally uncool. He gets away with it on Guffman because even successful Hollywood types can recall what it was like back at the high-school am-dram level, and the director and his semi-improvised script are surprisingly effective at digging into the characters. Guest's own role, the petulant, deluded queeny director Corky St Clair, is one of the great comic creations of recent film comedies.

Best in Show has no such corkers. Its tone is caught in the opening scene in which Hamilton and Meg Swan (Michael Hitchcock and Parker Posey) are in the middle of a turbulent therapy session. They

are both Illinois lawyers who first locked eyes through the windows of two branches of Starbucks on opposite sides of the street. As they complain that their child's possessiveness has destroyed their sex life, the camera pulls back to reveal the offending progeny: a Weimaraner.

New dog aside, these are all old tricks. Shrink gags. Jokes about dog owners who think they're mommy and daddy. Yuppie brand-name comedy. 'We are so lucky,' says Meg, 'to have been raised among catalogues.Was that line written by Guest? Or his co-writer Eugene Levy? Or improvised by Miss Posey? No author who respected his characters as living, breathing human beings would leave it in. As a result, it's possible to join with Guest, Levy and co in laughing at these people but not to engage with them.

The film-makers have hung their satire on a slender and oh so familiar conceit — that dog-show types project their ambitions and their vanities onto their mutts. To illustrate this one-joke thesis they produce stock comic figures accessorised for the duration with pooches. Guest himself plays a drawling bait-shop owner from North Carolina with a prize bloodhound. There's a couple of flouncy, bitchy, primped and ruffled gay guys with a shih tzu. There's a trashy Florida couple — the husband born with two left feet (literally), the wife a tramp who keeps running in to old bed mates among her fellow dog owners. There's Sherri Ann Cabot, a lavishly sillconed Anna Nicole Smith type trailing a geriatric billionaire hubby and a lesbian dominatrix poodle-trainer. The lesbian may or may not be giving more than Miss Cabot's poodle a workout. All this is perfectly functional, but neither the characters nor the comedy seem to have any organic relationship with the setting.

The exception is the ill-matched pair of announcers in the commentary box: one a high-toned English expert called Trevor Beckwith (as with Nigel Tufnell, Guest is always sound on Brit names), the other a genial garrulous American know-nothing called Buck Laughlin. Buck's rambling colour commentary is a highway pile-up of misfired facts, muddling Christopher Columbus with the Pilgrim Fathers and detecting sexual motivations for the most humdrum canine manoeuvre. Played with gleeful vulgarity by Fred Willard, Buck turns up and belatedly kicks the movie into gear. But he also underlines what's wrong with it: unlike Tap, with its conflicts between competing 'artistic geniuses', and Guffman, with a neurotic show queen up against a midwestern town council, there's no drama here, nothing to connect up a string of condescending variety-show skits. As real 'reality TV' producers would appreciate only too well, there's a severe narrative deficiency.