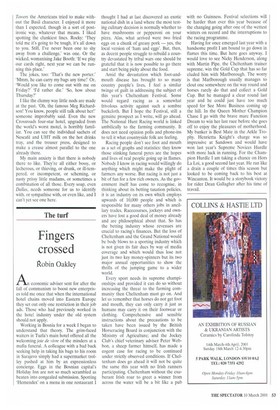 A1 economic adviser sent for after the fall of communism to boost new enterprises told me once that when the international hotel chains moved into Eastern Europe they set out only one restriction in their job ads. Those who had previously worked in the hotel industry under the old system should not apply.

Working in Bosnia for a week I began to understand that theory. The grim-faced waiters in Tuzla's main hotel offered all the welcoming joie de vivre of the minders at a mafia funeral. A colleague with a bad back seeking help in taking his bags to his room in Sarajevo simply had a supermarket trolley pushed at him by an expressionless concierge. Eggs in the Bosnian capital's Holiday Inn are not so much scrambled as beaten into congealed submission. Spotting 'Hemendex' on a menu in one restaurant I thought I had at last discovered an exotic national dish in a land where the most testing culinary decision is normally whether to have mushrooms or pepperoni on your pizza. Alas, what arrived were two fried eggs on a chunk of greasy pork — yes, the local version of 'ham and eggs'. But, then, as decent people struggle to rebuild a country devastated by tribal wars one should be grateful that it is now possible to go there and start being picky about the food.

Amid the devastation which foot-andmouth disease has brought to so many country people's lives, I feel a similar twinge of guilt in addressing the subject of this year's Cheltenham Festival. Some would regard racing as a somewhat frivolous activity against such a sombre backcloth. But I hope the Festival, still a genuine prospect as I write, will go ahead. The National Hunt Racing world is linked umbilically to the farming community. It does not need opinion polls and phone-ins to tell it what countryside folk are feeling.

Racing people don't see foot and mouth as a set of graphs and statistics: they know those stinking funeral pyres are the hopes and lives of real people going up in flames. Nobody I know in racing would willingly do anything which might make the plight of farmers any worse. But racing is not just a bit of fun for a few rich owners. As the government itself has come to recognise, in thinking about its betting taxation policies, it is an industry on its own Which employs upwards of 10,000 people and which is responsible for many others jobs in ancillary trades. Racecourses, jockeys and owners have lost a good deal of money already and are philosophical about that. So has the betting industry whose revenues are crucial to racing's finances. But the loss of Cheltenham and the Grand National would be body blows to a sporting industry which is not given its fair dues by way of media coverage and which would thus lose not just its two key money-spinners but its two major annual opportunities to show the thrills of the jumping game to a wider world.

Every sport needs its supreme championships and provided it can do so without increasing the threat to the farming community then Cheltenham must go on. And let us remember that horses do not get foot and mouth, they can only carry it just as humans may carry it on their footwear or clothing. Comprehensive and sensible instructions about the precautions to be taken have been issued by the British Horseracing Board in conjunction with the Ministry of Agriculture; and the Jockey Club's chief veterinary adviser Peter Webbon, a sheep farmer himself, has made a cogent case for racing to be continued under strictly observed conditions. If Cheltenham does go ahead it will not be quite the same this year with no Irish runners participating. Cheltenham without the exuberant Irish roar to greet a winner from across the water will be a bit like a pub with no Guinness. Festival selections will be harder than ever this year because of the changing going after one of the wettest winters on record and the interruptions to the racing programme.

Having for once emerged last year with a handsome profit I am bound to go down in flames this time. But here goes anyway. I would love to see Nicicy Henderson, along with Martin Pipe, the Cheltenham trainer supreme, win the Gold Cup that has so far eluded him with Marlborough. The worry is that Marlborough usually manages to clout one somewhere on the way round and horses rarely do that and collect a Gold Cup. But he managed a clear round last year and he could just have too much speed for See More Business coming up the hill. In the Queen Mother Champion Chase I go with the brave mare Function Dream to win her last race before she goes off to enjoy the pleasures of motherhood. My banker is Best Mate in the Attie Trophy. Henrietta Knight's charge was so impressive at Sandown and would have won last year's Supreme Novices Hurdle with more luck in running. For the Champion Hurdle I am taking a chance on Hors La Loi, a good second last year. He ran like a drain a couple of times this season but looked to be coming back to his best at Wincanton. It would be a storybook victory for rider Dean Gallagher after his time of travail.