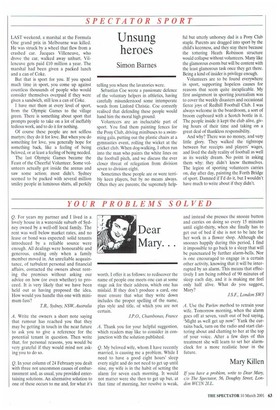 Q. My beloved wife, whom I have recently married, is

causing me a problem. While I need to have a good eight hours' sleep every night and do not need to get up until nine, my wife is in the habit of setting the alarm for seven each morning. It would not matter were she then to get up but, at that time of morning, her resolve is weak,

and instead she presses the snooze button and carries on doing so every 15 minutes until eight-thirty, when she finally has to get out of bed if she is not to be late for her work in a flower shop. Although she snoozes happily during this period, I find it impossible to go back to a sleep that will be punctuated by further alarm-bells. Nor is one encouraged to engage in a certain other activity, knowing that it will be interrupted by an alarm. This means that effectively I am being robbed of 90 minutes of sleep each day, and it is making me feel only half alive. What do you suggest, Mary?

J.S.F., London SW3 A. Use the Pavlov method to retrain your wife. Tomorrow morning, when the alarm goes off at seven, vault out of bed saying, 'Might as well get up now!' Yank the curtains back, turn on the radio and start clattering about and chatting to her at the top of your voice. After a few days of this treatment she will learn to set her alarmclock for a more realistic hour in the future.

If you have a problem, write to Dear Mary, clo The Spectator, 56, Doughty Street, London WC1N 2LL.