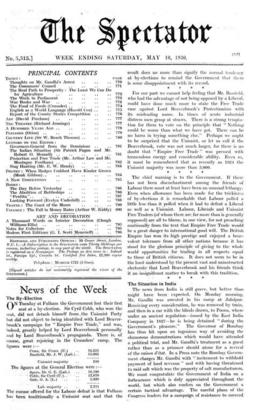 The By-Election ON Tuesday at Fulliam the Government lost their first seat at a by-election. Sir Cyril Cobb, who won the seat, did not detach himself from the Unionist Party but did not object to being identified with Lord Beaver- brook's campaign for "Empire Free Trade," and was, indeed, greatly helped by Lord Beaverbrook personally and by Lord Beaverbrook's propaganda. There is, of course, great rejoicing in the Crusaders' camp. The figures were :— COBB; Sir CYRIL (U.) .. 16,223 Banfnaa, Mr. J. W. (Lab.). : 15,983

The excuse offered for the Labour defeat is that Fulham has been traditionally a Unionist seat and that the result does no more than signify the normal tendency at by-elections to remind the Government that there is some disappointment with its record. * * *