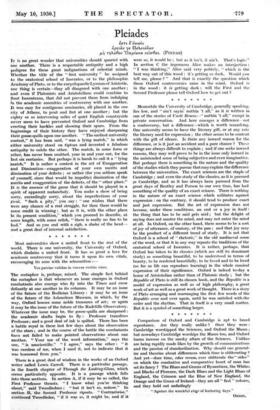 le is no great wonder that universities should quarrel with One another. There is a respectable antiquity and a high pedigree for these great indignations of celestial minds. Whether the title of the "first university" be assigned to the oratorical school of Isocrates, or to the philosophic Academy of Plato, or to the encyclopaedic Lyceum of Aristotle, one thing is certain—they all disagreed with one another ; and even if Platonis' ts and Aristotelians could combine to flout Isocrateans, that did not prevent them from indulging in the academic amenities of controversy with one another. It was easy for contiguous seminaries, all placed in the one city of Athens, to pout and fret at one another ; but the eighty or so intervening miles of quiet English countryside never seem to have prevented Oxford and Cambridge from erecting their hackles and showing their spurs. From the beginnings of their history they have enjoyed sharpening their goose-quills upon one another. "The earliest university contest," it has been said, "was a lying match," in which either university stood on tiptoes and invented a fabulous antiquity to outdo the other. The match, in some form or .other, has never been omitted, year in and year out, for the last six centuries. But perhaps it is harsh to call it a "lying Match." It is rather a contest in the art of Exaggeration And Diminution—exaggeration of your own merits and diminution of your defects ; or rather (for you seldom speak of yourself, since that would be impolite) diminution of the merits and exaggeration of the defects, of the " other place." It is the essence of the game that it should be played in a spirit of apparent melancholy. You make a show of being sorry, exceedingly sorry, about the imperfections of your rival. "Such a pity," you say : "one wishes that there Were any chance of a real struggle, for then there would be some credit in winning ; but as it is, with the other place in its present condition," which you proceed to describe, at some length, with some relish, "there is really no fun to be had." And so you end with a sigh, a shake of the head— and a great deal of internal satisfaction.

* * * * * * * Most universities show a united front to the rest of the world. There is one university, the University of Oxford, which disdains a united front. It has so great a love for academic controversy that it turns it upon its own vitals, encouraging its sons with the admonition :—

The metaphor is, perhaps, mixed. The simple fact behind the metaphor is that whenever an issue emerges in Oxford combatants also emerge who fly into the Times and crow defiantly at one another in its columns. It may be an issue of the future of the Bodleian Library : it may be an issue of the future of the Ashmolean Museum, in which, by the way, Oxford houses some noble treasures of art; or again it may be the issue of the future of the Radcliffe Observatory. Whatever the issue may be, the goose-quills are sharpened : the academic shafts begin to fly : Professor transfixes Professor ; and a good deal of ink is spilled. There has been a battle royal in these last few days about the observation of the stars ; and in the course of the battle the combatants have not failed to make pointed observations about one another. "Your use of the word information," says the one, "is unscientific." "I agree," says the other : "it was careless of me, when I used it, not to indicate that it was borrowed from you."

There is a great deal of wisdom in the works of an Oxford writer called Lewis Carroll. There is a particular passage, in the fourth chapter of Through the Looking-Glass, which seems particularly apposite. It is a passage which falls into three sections. In section A, if it may be so called, the First Professor thrusts. "1 know what you're thinking about," said Tweedledum ; "but it isn't so, nohow." In section B, the Second Professor riposts. "Contrariwise," continued Tweedledee, "if it was so, it might be, and if it

were so, it would be ; but as it isn't, it ain't. That's logic." In section C the ingenuous Alice makes an interjection : "I was thinking," Alice said very politely, 'which is the best way out of this wood : it's getting so dark. Would you tell me, please ? " And that is exactly the question which these Oxford controversies raise in the mind. Oxford is in the wood : it is getting dark : will the First and the Second Professor please tell Oxford how to get out ?

Meanwhile the University of Cambridge, generally speaking, lies low, and "ain't sayin' nuthin 't all," as it is written in one of the stories of Uncle Remus—" nuthin 't all," except in ' private conversation. And here emerges a difference—not a controversy, but a difference—which is worth remarking. One university seems to have the literary gift, or at any rate the literary need for expression ; the other seems to be content with the gift of silence. Is there any inward reason for the difference, or is it just an accident and a pure chance ? These things are always difficult to explain ; and if one seeks inward reasons, they may well prove to be in the issue only inward in the unintended sense of being subjective and even imaginative. But perhaps there is something in the nature and the quality of the studies which they pursue that may eXplain the difference between the universities. The exact sciences are the staple of Cambridge ; and even the study of the classics, as it is pursued in Cambridge, and as it has always been pursued from the great days of Bentley and Porson to our own time, has had something of the quality of an exact science. There is nothing in the nature of an exact science which militates against expression : on the contrary, it should tend to produce exact and just expression. But the art of expression does not become, under these conditions, an end or a joy in itself : the thing that has to be said gets said ; but the delight of saying does not master the mind, and may not enter the mind at all. In Oxford, on the other hand, there seems to be a sort of joy of utterance, of oratory, of the pen ; and that joy may be the product of a different trend of study. It is not that Oxford is a school of "rhetoric," in the old mediaeval sense of the word, or that it in any way repeats the traditions of the oratorical school of Isocrates. It is rather, perhaps, that Oxford has taken to its classics (which are still its dominant study) as something beautiful, to be understood in terms of beauty, to be rendered beautifully, to be loved and to be lived (so far as life can reproduce learning) in the whole musical expression of their significance. Oxford is indeed to-day a home of Aristotelian rather than of Platonic study ; but the Republic of Plato is still its chosen book, and the Republic is a model of expression as well as of high philosophy, a great work of art as well as a great work of thought. There is a story of Plato arranging and rearranging the first few words of the Republic over and over again, until he was satisfied with the order and the rhythm. That in itself is a very small matter. But it is a symbol of something larger.

Comparison of Oxford and Cambridge is apt to breed repentance. Are they really unlike ? Once they were : Cambridge worshipped the Sciences, and Oxford the Muses ; but nowadays Cambridge worships the Muses too, and Oxford burns incense on the smoky altars of the Sciences. Unlaces are being rapidly made likes by the growth of communications and the passion of standardization. Why should one general- ize and theorize about differences which time is obliterating ? And yet—does time, edax return, ever obliterate the" sides" on which the combative and comparative heart of man has set its fancy ? The Blues and Greens of Byzantium, the Whites and Blacks of Florence, the Dark Blues and the Light Blues of England, the Crimson and the Blue of New England, the Orange and the Green of Ireland—they arc all" fast" colours, and they hold out unfadingly "Against the wreckful siege of battering days."