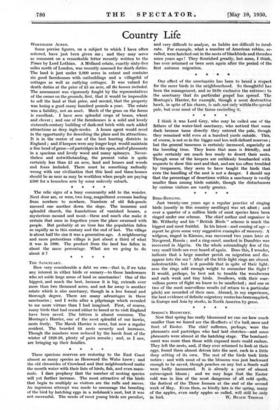 Now that spring has really blossomed we can see how much smaller than we feared are the ill-effects o.? hall, snow and

frost of Easter. The chief sufferers, perhaps, were the pheasants and partridges who had laid clutches—and some pheasants were almost it the hatching stage. The bombard- ment was more than those with exposed nests could endure. They left the nests, and, if they ever returned to look at their eggs, found them almost driven into the nest, each in a little deep setting of its own. The rest of the birds took little notice ; and with most of us the blossom was just backward enough to be saved, though peaches on any but a South wall' were badly hammered. It is already a year of almost extravagant bloom ; and we may hope that the Easter cold was in lieu of the most dangerous of all cold spells, the festival of the Three Icemen at the end of the second week of May. Even then, so kindly late is the spring, many of the apples, even early apples so called, will still be only