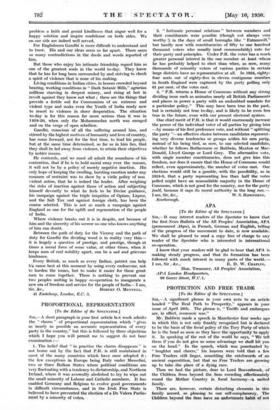 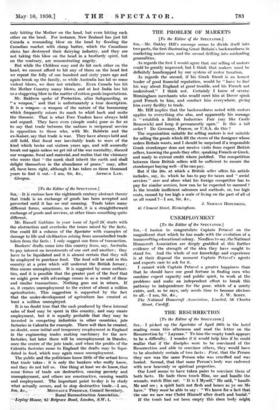 PROTECTION AND FREE TRADE _ [To the Editor of the

Sta,—A significant phrase in your own note to an article headed "The Real Path to Prosperity," appears in your issue of April 28th. The phrase is, " Tariffs and embargoes are, in effect, economic war."

Mr. Baldwin made a speech in Manchester four weeks ago in which this_ is not only frankly recognized but is declared to he the basis of the fiscal policy of the Tory Party of which he is the head as soon as they have the opportunity to apply it. In speaking of the rest of the world he says, "We tell them if you do not give us some advantage we shall hit you on the head:" In the speech, which was punctuated by "laughter and cheers," his hearers were told that a few Free Traders still- linger, mumbling the catchwords of an ancient superstition, but that no Free Traders are growing up to take. the place of a dying race.

Then we had the picture, dear to Lord Beaverbrook, of the Children from beyond the Seas crowding affectionately round the Mother Country in fiscal harmony—a united family.

There are, however, certain disturbing elements in this family accord, so pleasing to our self-complacency. The Children beyond the Seas have an- unfortunate habit of not only hitting the Mother on the head, but even hitting each other on the head. For instance, New Zealand has just hit Canada a resounding blow, on the head by flooding the Canadian market with cheap butter, which the Canadians claim has destroyed their dairying industry, and they are not taking this blow on the head in a brotherly spirit, but on the -contrary, are remonstrating angrily.

But while the Children. may and do hit each other on the head, we cannot afford- to hit any of them on the head lest we repeat the folly of one hundred and sixty years ago and again break up the family, so while Australia has hit us some violent . blows, we dare not retaliate. Even Canada has hit the Mother Country many blows, and at last -India has hit us a staggering blow in the matter of cotton goods importations.

Mr. - Baldwin spoke of Protection, alias Safeguarding, as "a weapon," and that is unfortunately a true description. It is a weapon—a weapon of the nature of the boomerang which frequently misses its mark to whirl back and smite the thrower. That is what Free Traders have always held and argued. They have even (simple souls) gone--so far as to -say that trade between the nations is reciprocal service in opposition to those who, with Mr. Baldwin and the ex-Kaiser, say that trade is ware They have always held and still hold, that fiscal war inevitably leads to wars of the kind which broke out sixteen years ago, and will assuredly break out again unless we get rid of the war mentality, discard our weapons, fiscal and material, and realize that the visionary who wrote that the meek shall inherit the earth and shall delight -themselves in the abundance of peace," may, after all, have been right, although it has taken as three thousand