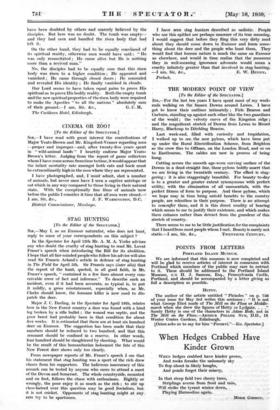 CINEMA OR ZOO? • [To the Editor of the SPECTATOR.]

have read with great interest -the contributions of Major Yeats:Brown and Mr. KinisfordNenner regarding zoos —proper and' improper—and, after twenty-five ',years spent' in "wild-animal' lands" I heartily endorse Major Yeats. Brown's letter. Judging from the report of game collectors whoml have &One across from time to time, it would appear that the infant mortality rate amongst both cats and buck must be extraordinarilyhigh in the zoos where they are represented.

I have photographed, and, -1-mtist admit, shot 'a number of animals, but never once have I Seen a captive antelope Or eat which in any way eompared to those living in their natural state.- With the exceptionally fine films of- animals 'now before the public I consider it time that all-zoos were- eldsed.--=