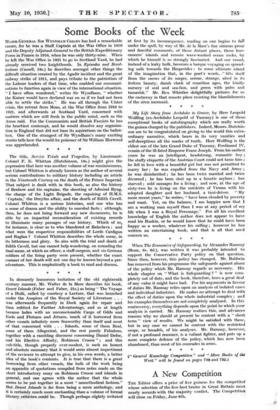 My Life Story from. Archduke to Grocer, by Herr Leopold

Wolffing (ex-Archduke Leopold of Tuscany) is one of those exceptional books of autobiography which are really worth the guinea charged by the publishers. Indeed, Messrs. Hutchin- son are to be congratulated on giving to the world this extra- ordinary narrative, which bears in its very vanities and self-deceptions all the marks of truth. Herr Wolfling is the eldest son of the late Grand Duke of Tuscany, Ferdinand IV, cousin of the ill-fated Emperor Franz Joseph. From his earliest years he was an (intelligent, headstrong, romantic boy ; the stuffy etiquette of the Austrian Court could not tame him ; he fell in love with a beautiful girl but was not permitted to marry her ; he was expelled from the Navy and Army ; he was disinherited ; he has been twice married and twice divorced ; he has been shut up in a lunatic asylum ; has starved ; sold sausages for a living ; and now, at the age of sixty-two he is living on the outskirts of Vienna with his adopted daughter and her husband, a taxi-driver. "My more recent years," he writes, "have been clouded by poverty and want. Yet, on the balance, I am happier now that I am a working man myself than I was at any period of my life when I was a Royal Personage." For all his excellent knowledge of English the author does not appear to have read his Ruskin, or he would know that he could have been happy as a worker, whatever his calling ; however he has written an entertaining book, and that is all that need concern us. * * * *