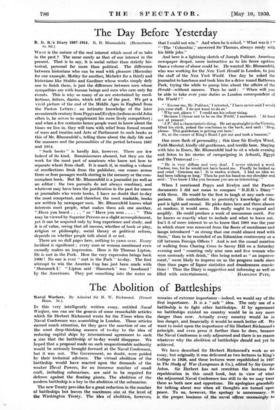 The Day Before Yesterday

WHAT is the nature of the real interest which most of us take in the past ? The same surely as that of our interest in the present. That is to say, it is social rather than strictly his- torical, personal far more than political. The difference between historians who can be read with pleasure (Macaulay for one example, Motley for another, Miehelet for a third) and historians like Stubbs and Gardiner whose works simply defy one to finish them, is just the difference between men whose sympathies are with human beings and men who care only for events. This is why so many of us are entertained by recol- lections, letters, diaries, which tell us of the past. We get a vivid picture of the end of the 11-fiddle Ages in England from the Paston Letters ; an intimate knowledge of the later seventeenth century from Pepys and Evelyn (tedious as old John often is, he serves to supplement his more lively, competitor) ; and when a few centuries hence people want to know about the times we live in, they will turn with relief from formal record of wars and treaties and Acts of Parliament to such books as this of Mr. Blumenfeld's, telling them about the daily life and the manners and the personalities of the period between 1887 and 1914.

"Such books" is hardly fair, however. There are few Indeed of its kind. Reminiscences abound, but they Are the work for the most part of amateurs who know not how to separate wheat from chaff. It is much if, in reading a volume of recollections fresh from the publisher, one comes across three or four passages worth storing in the memory or the com- monplace book. But Mr. Blumenfeld is a journalist (as well as an editor : the two pursuits do not always combine), and whatever may have been the justification in the past for sneers at journalists who wrote books, I have no doubt that to-day the most competent and therefore the most readable, books are written by newspaper men. Mr. Blumenfeld knows what interests most people, what makes them ask one another, ",,Have you heard . . . . " or " Have you seen . . . . " This may be viewed by. Superior Persons as a slight accomplishment, yet it can be acquired only by long experience and study, and U- is of value, seeing that all success, whether of book or play, religion or philosophy, social theory or political reform; depends on whether people talk about it or not. .

There are no dull pages here, nothing to yawn over. Every incident is -significant-; every man or woman mentioned even casually makes an impression. Here is Sir Thomas Lipton. He is met in the Park. How the very expression.brings back 1900! No one is ever "met in the Park" to-day. The first attempt to win the America Cup has just been made with Shamrock I.' "Lipton said 'Shamrock' was hoodooed ' by the Americans. They put something into the water so

that I could not win." And when he is asked, " What was it ? "'The Columbia',' answered Sir Thomas, always ready with his little joke."

And here is a lightning sketch of Joseph Pulitzer, American newspaper despot, more instructive as to his fierce egotism than a volume of abuse could be. He wanted Mr. Blumenfeld, who was working for the New York Herald in London, to join the staff of the New York World. One day he asked the journalist to luncheon and took him for a drive round Battersea Park, trying the while to pump him about the affairs of the Herald—without success. Then he said : " When will you be able to take over your duties as London correspondent of the World?"

"'Excuse me, Mr: Pulitzer,' I retorted, I have never said I would join your staff. I do not want to do so.' Why not, please ? ' I could see his colour rising.

Because I choose not to be on the World,' I answered. 'At least not at present.'

did a characteristic thing. He satupstraightinthe Victoria, lifted his stick, poked the coachman in the back, and said : 'Stop, please. This gentleman is getting Out here.' So, at the corner of King's Road I got out and took a hansom."

One more flash of personality ; this time Sir Evelyn Wood, Field-Marshal, kindly old gentleman, and terrific bore. Staying with him in Essex, Mr. Blumenfeld had- to sit a whole evening and listen to his stories of campaigning in Ashanti, Egypt and the Transvaal :—

" He is very diffuse and very deaf. I never uttered a word. Useless, too, for he would not have heard me. Finally he looked up and cried Gracious me ! It is twelve o'clock. I had no idea we had been talking so long: Then he put his hand on my shoulder and said 'You know I like you because you are so interesting.'"

When I mentioned Pepys and Evelyn and the Paston documents I did not mean to compare " R.D.B.'s Diary" with them. He would be the first to laugh at any such com- parison. His contribution to posterity's knowledge of the past is light and casual. He picks dates here and there almost at random, it would seem. He really ought to expand and amplify. He could produce a work of uncommon merit. For he knows so exactly what to include and what to leave out. Isn't it of more interest to us to know that 1901 was the year in which straw was removed from the floors of omnibuses and lamps introduced "so strong that one could almost read with them," than to be reminded of an Education controversy or a tiff between Foreign Offices ? And is not the casual mention of walking from Charing Cross to Savoy Hill on a Saturday evening and "counting only nine men and five women who were unsteady with drink," this being noted as an improve- ment," more likely to impress on us the progress made since then than pages of liquor statistics and drunkenness convic- tions ? Thus the Diary is suggestive and informing as well as