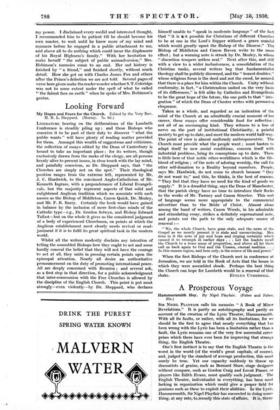 LITERATURE bearing on the deliberations of the Lambeth Conference is steadily piling up ; and those Bishops who conceive it to be part of their duty to discover "what the, public wants" will have plenty of reading matter provided for them. Amongst this wealth of suggestions and criticisms, the collection of essays edited by the Dean of Canterbury is bound to take an important place ; for its writers, though exclusively drawn from the ranks of the clergy, are all persons keenly alive to present issues, in close touch with the lay mind, and painfully conscious, as Dr. Sheppard says, that "the Churches are simply not on the spot." Their theological position ranges from the extreme left, represented by Mr.. J. C. Hardwick, to the convinced Anglo-Catholicism of Mr. Kenneth Ingram, with a preponderance of Liberal Evangeli- cals, but the majority represent aspects of that solid and enlightened Anglican tradition which we associate with such names as the Bishop of Middleton, Canon Quick, Dr. Mozley, and Mr. F. R. Barry. Certainly the book would have gained in balance by the inclusion of more first-class minds of the Catholic type—e.g., Dr. Gordon Selwyn, and Bishop Edward Talbot--1-but on the whole it gives us the considered judgment of a body of experienced Churchmen, on points at which the Anglican establishment most clearly needs revival or read- justment if it is to fulfal its great spiritual task in the modem world.

Whilst all the writers modestly disclaim any intention of telling the assembled Bishops how they ought to act and some hardly conceal the belief that they will not have the courage to act at all, they unite in pressing certain points upon the episcopal attention. Nearly all desire an authoritative pronouncement on the duty of promoting international peace. All are deeply concerned with Reunion ; and several ask, as a first step in that direction, for a public acknowledgment that inter-communion with the Free Churches is allowed by the discipline of the English Church. This point is put most strongly—even violently—by Dr. Sheppard, who declares himself unable to "speak in moderate language" of the fact that "it is lilt possible for Christians of different Churches

to be at one in the Lord's Supper without a grave scandal which would greatly upset the Bishop of the Diocese." The Bishop of Middleton and Canon Raven write to the same effect ; but a warning note is struck by Dr. Mozley, in whom "discretion tempers artless zeal." Next after this, and still with a view to a wider inclusiveness, a consolidation of the Christian ranks, several writers beg that fundamentalist theology shall be publicly disowned, and the" honest doubter," whose religious focus is the deed and not the creed, be assured that there is a place for him within the Church. Unity without conformity, in fact, "a Christendom united on the very basis

of its -differences," is felt alike by Catholics and Evangelicals to be the great hope of the future, the one path to that" inte-

gration" of which the Dean of Chester writes with persuasive eloquence.

Taken as a whole, and regarded as an indication of the mind of the Church at an admittedly crucial moment of her career, these essays offer considerable food for reflection : not all of an encouraging kind. They witness to a loss of nerve on - the part of institutional Christianity, a painful anxiety to get up to date, and meet the modern world half-way.

The point of view is almost uniformly anthropocentric. 'The Church must provide what the people want ; must hasten to adapt itself to new ...social conditions, concern itself with industrial problems,bring its conceptions up to date. There is little here of that noble other-worldliness which is the life- blood of religion ; of the note of adoring worship, the call for utter self-donation to a Reality beyond ourselves. People, says Mr. HardWiek, do not come to church because "they

do not want to," and this, he thinks, is the best of reasons. 4` They feel that they- have no need for the kind of goods-we

supply." It is a dreadful thing, says the Dean of Manchester, that the parish clergy have no time to introduce their flocks

to the works of Mr. Tawney and Canon Streeter. This sort of language seems more appropriate to the commercial

advertiser than to the Bride of Christ. Almost alone

among the band of writers, Canon Wciods, in his admirable and stimulating essay, strikes a definitely supernatural note, and points out the path to the only adequate -source of

"We, the whole Church, have gone stale, and the news of the Gospel as we mostly present it is stale and unconvincing. Men miss in it the note of joy and hope and ringing certainty which caused it to triumph in earlier days . Let the leaders recall the Church to a truer sense of proportion, and above all let them call us back again to God and the Unseen, eternal realities. . . In this unseen region, and here only; is the source of life and power."

. When the first Bishops of the Church met in conference at Jerusalem, we are told in the Book of Acts that the house in which they were assembled shook. Perhaps the best thing the Church can hope for Lambeth would be a renewal of that