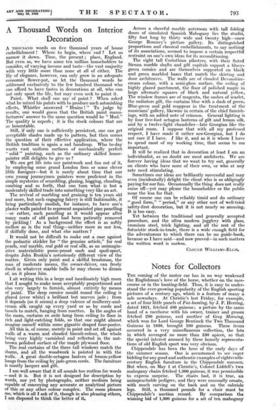 A Thousand Words on Interior Decoration, A THOUSAND words on

five thousand years of house embellishment ! Where to begin, *here end ? Let us narrow it down. Time, the present ; place, England. But even so, we have some ten million householders to Consider, of varying income and taste—the vast majority with very little more than none at all of either. The lily of elegance, however, can only grow in an adequate .economic flower-pot,'. sp let the thousand words be addressed exclusively tO the few hundred thousand who Can afford to have tastes in decorations at all, who can not only sport the lily, but May even seek to paint it.

Paint.- What shall one say of paint ? , When asked what he mixed his paints with to produce such astonishing effects, 'Whistler answered " Brains " To judge by results, one would guess that the British paint manu- facturers' answer to the same question would be "Mud." The quality is superb ; it is the stock colours that are so lamentable.

Still, if only one is sufficiently persistent, one can get acceptable shades made up to pattern, but then comes the question of their effective application, where the British tradition is again a sad handicap. Who to-day wants vast uniform surfaces of mechanically perfect " solid " painting, such as the ordinary skilled house. painter still delights to give us ? We can get life into our paintwork and fun out of it, by employing some grand London firm or some clever little foreigner—but it is surely about time that our Own young journeymen painters were proficient M the simple mysteries of scumbling, glazing, hogging, clouding; combing and so forth, that can -turn What is but a moderately skilled trade into soinething Very like an art. The revival of marbling arid- graining is ten years old and more, but such engaging fakery is still fashionable, it being particularly -modish, for instance, to have One's plaster walls painted to represent unpainted pine panelling —or rather, such panelling as it would appear after many goats of old paint had been patiently removed by picklingt As a background the effect is as softly mellow as is the real thing—neither more SO nor less; if skilfully done, and What else matters?

It wouldnot be difficult to make out a case against the pedantic stickler for "the genuine article," for real pearls, real marble, real gold Or real silk, as an unimagin- ative materialistic purse proud snob and spoil sport, despite John: Ruskin's notoriously different view Of the matter. Given, only paint and a skilful brushman, the man of Moderate means, the owner driver, can freely dwell in whatever marble halls he may choose to dream of, an it please' him.

Isit writing this M a-large and inordinately high room that.I sought to _make more acceptably proportioned and also very largely to furnish, almost entirely by means of Paint-. The deepcornice mould. round the ceiling is glazed (over white) a brilliant but uneven jade ; from it depends (so it seems) a deep valence of mulberryond- cream silk naught up every yard or so by cords and tassels to match, hanging from rosettes. In the angles of the Too.m, curtains en suite -bang from. ceiling to floor in rich and .light-catching folds, so, that one might almost imagine oneself within some gigantic draped four-poster. All this is, of come, merely in paint and set off against walls of a:warm:and Clouded biscuipeolour, the whole being Very highly varnished and reflected in the nut- brown .polished surface of- the -maple plywood floor. , The, real- curtains of -the three tall -windows match the shams,, and all the woodwork is painted- in with the was.. A. great double-octagon lantern of lemon-yellow hangs from the ceiling by jade-green cords. The furniture is mostly lacquer and gilt.

I am well aware that it all sounds too restless for words —and it is. But it is not designed for description by words, nor Yet by photographs, neither medium being capable of conveying, any accurate or analytical picture of this or any other colour complex. The room pleases me, which is all I ask of it, though in also pleasing others, I am disposed to think the better of it. Across a cheerful marble anteroom with tall folding doors of simulated Spanish Mahogany lies the studio, fifty foot long by thirty wide and twenty high—once George Romney's picture gallery. Its distinguished -proportions and classical embellishments, to say nothing of its associations, seemed to impose a certain respectful restraint on one's own ideas for its reconditioning. " The eight tall Corinthian pilasters, with their fluted -Sienna marble shafts and gilt capitals support a bluey4 green cornice and are themselves supported on black and green marbled bases that match the skirting and door architraves. The walls are of clouded Devonshire- -cream colour' with a semi-gloss surface, the ceiling of -highly glazed parchment, the floor of polished maple in large alternate squares of black and natural yellow, The window frames are of magenta, the sashes of scarlet, the radiators gilt, the Curtains blue with a dash of green: Blue-green and ' gold reappear in the treatment of the musicians' gallery, likewise in certain of the chief furnish- ings, with an added note of crimson. General lighting is by four five-foot octagon lanterns of gilt and lemon silk, and by a twelve-light chandelier—late Georgian like the original room. I suppose that with all my professed respect, I have made it rather neo-Georgian, but I do not care if I have. / like it, and as it is where I have to spend most of my working time, that seems to me important.

It will be realized that in decoration at least I am an individualist, as no doubt are most architects. We are forever having ideas that we want to try out, generally on clients who have none of their own, or who at any rate need stimulating.

= Sometimes our ideas are brilliantly successful and may even (incidentally) delight the client who is so obligingly paying for our fun. Occasionally the thing does not really come off—yet may pleaSe the householder or the public none the less for that Of course one can be reliably timid and do ordinary ." good fOrm," "period," or any other sort of well-tried Safety-first decoration, but it is not nearly so amusing, It is too easy.

Yet between the traditional and generally accepted procedure, and the ultra modern jugglery with glass, cromium steel, trick lighting, and all the rest of the futuristic stock-in-trade, there is a wide enough field for the adventurous to which there can be no guide-book, because as I have said—and now proved—in such matters the written word is useless. - CLOUGI WILLIAMS-ELLIS.