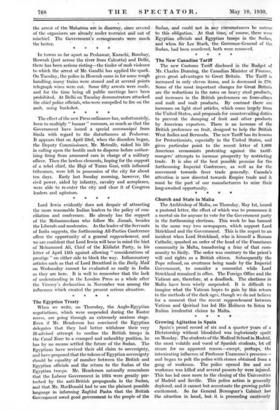 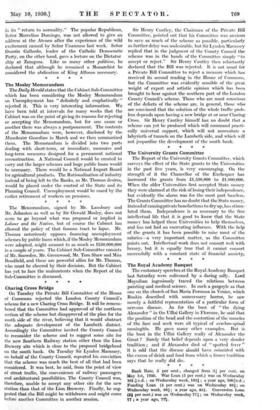 Growing Agitation in Spain Spain's proud record of six and

a quarter years of a Dictatorship without bloodshed was ingloriously spoilt on Monday. The students of the Medical School in Madrid, the most volatile and vocal of Spanish students, let off steam for no apparent reason—except, perhaps, the intoxicating influence of Professor Unamuno's presence— and began to pelt the police with stones obtained from a gang of workmen. The police opened fire and one workman was killed and several passers-by were injured. This has led once more to the closing of the Universities of Madrid and Seville. This police action is generally deplored, and it cannot but accentuate the growing public excitement. So far General Berenguer's Cabinet has the situation in hand, but it is proceeding cautiously in its "return. to normality." The popular Republican, Senor Marcelino Domingo, was not allowed to give an address at the Ateneo after the experience of the -wild excitement caused by Senor Unamuno last week. Senor Ossorio Gallardo, leader of the Catholic Democratic Party, on the other hand, gave a lecture on the Dictator ship at Zaragoza. Like so many other politicos, he declared that although he remained a Monarchist he considered the abdication of King Alfonso necessary.