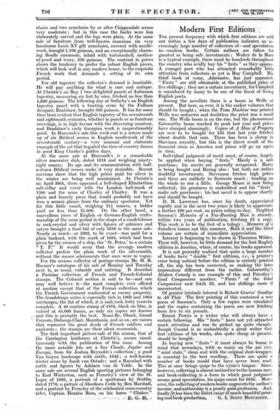 THE present frequency with which first editions are sold out within a few days of publication indicates an in.. creasingly large number of collectors of—and speculators in—modem books. Certain authors are taken for 'granted as being safe investments : Walter de in Mare • is a typical example, there must be hundreds throughout the country who avidly buy his " firsts " as 'they appear. A younger poet who has attracted remarkably little attention from collectors as yet is Roy -Campbell. His third book of verse, Ad,amastor, has just appeared. " Firsts " are still obtainable at the published price of five shillings' • they are a certain investment, for Campbell is considered by many to be one of the finest of living English poets. Among the novelists there is a boom in Wells at present. But here, as ever, it is the earlier volumes that should be bought ; when the Time Machine Was printed Wells was unknown and doubtless the print was a small one. The Wells boom is on the rise, but the phenomenal Galsworthy boom reached its peak last year and prices have slumped alarmingly. Copies of A Man of Property are now to be bought for £55 that last year fetched about double that sum. There has been a slump in Shaviana recently, but this is the direct result of the financial crisis in America and prices will go up again in time.

Individual judgment of merit must, of course, largely be applied when buying "firsts." Hardy is -a safe purchase; his merits are generally recognized. Barry is being bought and Baring also : but both are 'rather doubtful investments. Stevenson fetches high prices and these are unlikely to fluctuate much : tending on the whole to rise a little. George Moore is now• being collected; his greatness is undoubted and his "firsts," make safe purchases : his last novel is to appear shortly and Should be bought. D. H. Lawrence has, since his death, appreciated rapidly and in the next two years is likely to 'appreciate a further 100 per cent. on prices ruling to-day. *- Siegfried Sassoon's Memoirs of a Fox-Hunting Man is already, Within two Years Of publication, fetching 15 a copy. This work is to be the first of a trilogy : Memoirs of a Subaltern homes out this sininmer li6th it and the third volume are certain of immediate appreciation. Interest is beginning to be shown in Thornton Wilder. There Will, however, belittle demand for the first English editions in America, where, of course, his books appeared. It is not _generallY realized that quite a large number of books have " double " first editions, i.e., a printer's error being noticed before the edition is entirely printed off, the slip has been corrected, so making the later impressions different from the earlier. Galsworthy's Modern Comedy is one example of this and Priestley's Good Companions, another. " Firsts " of the Good Companions- no*" eta 23, and ten shillings more - if uncorrected.

Of greater 'intrinsic interest is Robert Graves' Goodbye to All That The first printing of this contained a war poem of Sassoon's. Only a few copies were circulated and the copies containing the poem are now fetching from five to six pounds. Ernest Powys IS fI writer' who Will always have a Certain following. His " firsts " have not yet attracted much attention and can be picked up quite cheaply. Joseph Conrad is so undoubtedly a great writer that first editions of his -works, also quite cheap at present, should be bought. - hi buying new " firsts " it must always be borne in mind that nowadays, with so many on the qui vive, "mint state," clean and with the original dust-wrapper, is essential to the best reselling. There are quite a number of books resold that have never been read. This at once brings quips to the 'cynic's tongue. Since, however, collecting is ahnost instinctive to the human race, and book-collecting is a form in which good judgment means good speculation, his quips count for little. More- over, the collecting of modem books augments the author's income, and authorship is a poorly paid.profession. And, flnally,tit lias been the direct cause Of much beautiful print-,