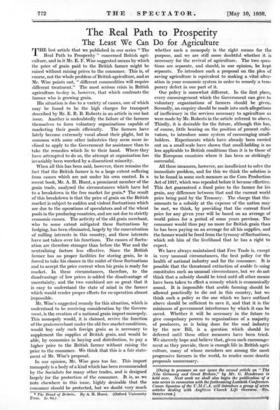 The Real Path to Prosperity

Can Do for Agriculture

THE last article that we published in our series "The Real Path to Prosperity" concerned British agri- culture, and in it Mr. E. F. Wise suggested means by which the price of grain paid to the British farmer might be raised without raising prices to the consumer. This is, of course, not the whole problem of British agriculture, and as Mr. Wise points out, "different commodities will require different treatment." The most serious crisis in British agriculture to-day is, however, that which confronts the farmer who is growing grain.

His situation is due to a variety of causes, one of which may be found to be the high charges for transport described by Mr. E. R. B. Roberts in an article in our last issue. Another is undoubtedly the failure of the farmers themselves to form voluntary organizations capable of marketing their goods efficiently. The farmers have lately become extremely vocal about their plight, but in common with some other industries they seem more in- clined to apply to the Government for assistance than to take the remedies which lie to their hand. Where they - have attempted to do so, the attempt at organization has invariably been wreeked by a dissentient minority.

When all this has been said, however, there remains the fact that the British farmer is to a large extent suffering from causes which are not under his own control. In a recent book, Mr. A. H. Hurst, a prominent member of the grain trade, analysed the circumstances which havg led to a breakdown in the free market for grain.* The result of this breakdown is that the price of grain on the British market is subject to sudden and violent fluctuations which are due to the operations of speculators and of the wheat pools in the producing countries, and are not due to strictly economic causes. The activity of the old grain merchant, who to some extent mitigated these fluctuations by hedging, has been eliminated, largely by the concentration of milling interests in this country, and these interests have not taken over his functions. The causes of fluctu- ation are therefore stronger than before the War and the neutralizing factors less effective. Since the British farmer has no proper facilities for storing grain, he is forced to take his chance in the midst of these fluctuations and to accept the price current when his grain is ready for market. In these circumstances, therefore, to the disadvantage of low prices is•added the disadvantage of uncertainty, and the two combined are so great that it is easy to understand the state of mind in the farmer which would render proper efforts for co-operation almost impossible.

Mr. Wise's suggested remedy for this situation, which is understood to be receiving consideration by the Govern- ment, is the creation of a national grain import monopoly.

This monopoly would, it is claimed, revive the function of the grain merchant under the old free market conditions, would buy only such foreign grain as is necessary to supplement the supplies of British grain, and would be able, by economies in buying and distribution, to pay a higher price to the British farmer without raising the price to the consumer. We think that this is a fair state- ment of Mr. Wise's proposal.

In our opinion, Mr. Wise goes too far. This import monopoly is a body of a kind which has been recommended by the Socialists for many other trades, and is designed largely for the protection of the consumer. It is, as we note elsewhere in this issue, highly desirable that the consumer should be protected, but we doubt very much

whether such a monopoly is the right means for the purpose, and we are still more doubtful whether it is necessary for the revival of agriculture. The two ques- tions are separate, and should, in our opinion, be kept separate. To introduce such a proposal on the plea of saving agriculture is equivalent to making a vital alter- ation in your economic system in order to remedy .a tem- porary defect in one part of it. Our policy is somewhat different. In the first place, every encouragement which the Government can give to voluntary organizations of farmers should be given. Secondly, an enquiry should be made into such allegations of inefficiency in the services necessary to agriculture as were made by Mr. Roberts in the article referred to above. Thirdly, it is desirable for the future, although this has, of course, little bearing on. the position of present culti- vators, to introduce some system of encouraging small- holders. Experiments which have already been carried out on a small scale have shown that small-holding is no less applicable to British conditions than it is to those of the European countries where it has been so strikingly successful.

All these measures, however, arc insufficient to solve the immediate problem, and for this we think the solution is to be found in some such measure as the Corn Production Act of 1917, which was repealed before it became effective. This Act guaranteed a fixed price to the farmer for his grain, any difference between that and the current world price being paid by the Treasury. The charge that this amounts to a subsidy at the expense of the nation may be met, we think, by providing that the current fixed price for any given year will be based on an average of world prices for a period of some years previous. The consumer would thus pay no more for British grain than he has been paying on an average for all his supplies, and the fanner would be freed from the tyranny of fluctuations, which rob him of the livelihood that he has a right to expect.

We have always maintained that Free Trade is, except in very unusual circumstances, the best policy for the health of national industry and for the consumer. It is possible that the threatened extinction of arable farming constitutes such an unusual circumstance, but we do not think that a subsidy should be tried until all other means have been taken to effect a remedy which is economically sound. It is impossible that arable farming should be allowed practically to die out in this country, but we think such a policy as the one which we have outlined above should be sufficient to save it, and that it is the minimum of government interference by which it can be saved. Whether it will be necessary in the future to give compulsory powers to organizations of a majority of producers, as is being done for the coal industry by the new Bill, is a question which should be deferred until these other measures have been tried. We sincerely hope and believe that, given such encourage- ment as they provide, there is enough life in British agri- culture, many of whose members are among the most progressive farmers in the world, to render more drastic proposals unnecessary.