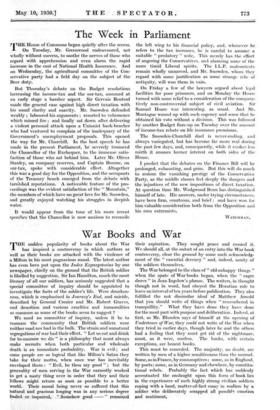 THE House of Commons began quietly after the recess. On Tuesday, Mr. Greenwood endeavoured, not wholly without success, to soothe the nerves of those who regard with apprehension and even alarm the rapid increase in the cost of National Health Insurance. And on Wednesday, the agricultural committee of the Con- servative party had a field day on the subject of the Beer duty.

But Thursday's debate on the Budget resolutions increasing the income-tax and the sur-tax, assumed at an early stage a harsher aspect. Sir Gervais Rentoul made the general case against high direct taxation with his usual clarity and suavity. Mr. Snowden defended weakly ; laboured his arguments"; resorted to vehemence Which missed fire ; and finally sat down after delivering a violent personal attack upon a Unionist back-bencher who had ventured to complain of the inadequacy of the Government's unemployment proposals. This opened the way for Mr. Churchill. In the best speech he has made - in the present Parliament, -he severely trounced the Chancellor of the Exchequer, to the immense satis- faction of those who sat behind him. Later Mr. Oliver Stanley, on company reserves, and Captain Bourne, on stir-tax, spoke with considerable effect. Altogether this Was a good day for the Opposition, and the occupants of the Treasury bench emerged from the debate with tarnished reputations. A noticeable feature of the pro- ceedings was the evident satisfaction of the "Mountain," the members of which have no.great love for Mr. Snowden, and greatly enjoyed watching his struggles in deepish water.

It would appear from the tone of his more recent speeches that the Chancellor is now anxious to reconcile the left wing to his financial policy, and, whenever he refers to the tax increases, he is careful to assume a suitable " predatory " note. This merely has the effect of angering the Conservatives, and alarming some of the more timid Liberal spirits. The I.L.P. malcontents remain wholly unmoved, and Mr. Snowden, whom they regard with some justification as some strange relic of antiquity, will woo them in vain.

On Friday a few of the lawyers argued about legal facilities for poor prisoners, and on Monday the House turned with some relief to a consideration of the compara- tively non-controversial subject of civil aviation. Sir Samuel Hoare was interesting, as usual. And Mr. Montague wound up with such cogency and sense that he Obtained his vote without a. division. This was followed by another Budget flare-up on Tuesday over the amount Of income-tax rebate on life insurance premiums. • The Snowden-Churchill duel is never-ending, and always variegated, but has become far more real during the past few days, and, consequently, while it evokes less mirth it 'arouses keener interest on both sides of the House.

I predict that the debates on the Finance Bill will be prolonged, exhausting, and grim. But this will do Much to restore the vanishing prestige of the Conservative Party, as the middle classes feel deeply the dangers and the injustices of the new impositions of direct taxation. At question time Mr. Wedgwood Benn has distinguished himself of late. His answers, under trying circumstances, have been firm, courteous, and brief : and have won for him valuable consideration both from the Opposition and his own extremists.