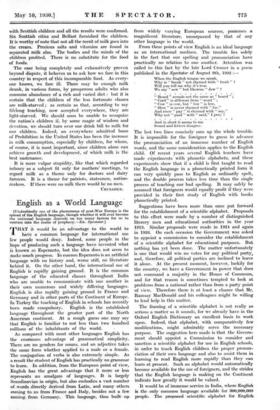 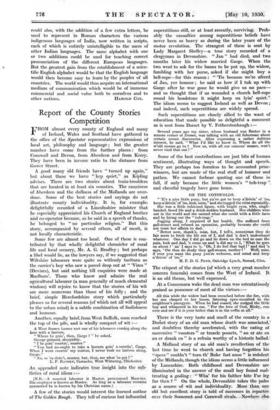 English as a World Language

(Undoubtedly one of the phenomena of post-War Europe is the spread of the English language, though whether it will ever become the universal language depends on too many factors for us ta ventare into the realm of prophecy.—ED. Spectator.]

THAT. it would be an advantage to the world to " haVe a common language for international use few people would. deny. Indeed, some people: in the hope of producing such a language have invented what is known as' Esperanto, but the idea does not seem to : make mita'. 'progress; In essence Esperanto, is an artificial 'language with no history and, worse still, no literature behind it. On the other hand, the international use of English is rapidly gaining ground. It is the common language - of -the educated classes throughout India who are unable to Communicate with One another in their .own numerous and widely differing languages. English is also rapidly gaining ground in France and Germany and in other parts of the Continent of Europe. In Turkey the teaching of English in schools has recently been. made compulsory. English is the established language throughout the greater part of the North ,American continent. At a rough guess one may say that English is familiar to not less than two hundred millions of • the inhabitants of the world.

• As compared with most other languages English has the enormous advantage of grammatical simplicity. There are no genders for nouns, and an adjective takes the same form whether applied to a male or a female. The conjugation of verbs is also extremely simple. As a result the student of English has practically no grammar to learn. In addition, from the European point of view, English has the great advantage that it more or less represents an amalgam of languages. It is largely Scandinavian in origin, but also embodies a vast number of .words .directly derived from Latin, and many others coming to. us from France and Italy, besides not a few coming. from. Germany- This language, thus built- up from widely varying European sources, possesses a magnificent literature, unsurpassed by that of any other language in the world.

From these points of view English is an ideal language as an international medium. The trouble lies solely in the fact that our spelling and pronunciation have practically no relation to one another. Attention was called to this fact by the late Lord Cromer in a poem published in the Spectator of August 9th, 1902 :'-

And in short it seems to me Sound and letters disagree.

The last two lines concisely sum up the whole trouble. It is impossible for the foreigner to guess in advance the pronunciation of an immense number of English words, and the same consideration applies to the English Child. Of recent years several English teachers have Made experiments with phonetic alphabets, and these experiments show that if a child is first taught to read the English language in a phonetically printed form it can very quickly pass to English as . ordinarily spelt, and the double process takes less time than the single process Of teaching our bad spelling. It may safely be assumed that foreigners would equally profit if they were provided in their first study of English with books phonetically printed.

Suggestions have been more than once put forward for the establishment of a scientific alphabet. Proposals to this effect were made by a number of distinguished literary men and educational authorities in the year 1915. Similar proposals were made in 1924 and again in 1926. On each occasion the Government was asked to appoint a commission to consider the establishment of a. scientific alphabet for educational purposes. But nothing has yet been done. The matter unfortunately is one that would win no votes for any political party, and, therefore, all political parties are inclined to leave it alone. At the present moment, however, luckily for the country, we have a Government in power that does not command a majority in the House of Commons, and for that reason is sometimes tempted to look at problems from a national rather than from a party point of view. Therefore there is at least a chance that Mr, Ramsay MacDonald and his colleagues might be willing to lend help in this matter.

The framing of a scientific alphabet is not really so serious a matter as it sounds, for we already have in the Oxford English Dictionary an excellent basis to work upon. Indeed, that alphabet, with comparatively few modifications, might admirably serve the necessary purpose. The suggestion here made is that the Govern- ment should appoint a Commission to consider and sanction a scientific alphabet for use in English schools, in order to teach English children the proper pronun- ciation of their own language and also to assist them in learning to read English more rapidly than they can learn at present. Such an alphabet would automatically become available for the use of foreigners, and the strides that the English language is making on the Continent indicate how greatly it would be valued.

It would be of immense service in India, where English is the only common language available for 800,000,000 people. The proposed scientific alphabet for English. could also, with the addition of a few extra' letters, be used to represent in Roman characters the various indigenous languages of India, now written in scripts, each of which is entirely unintelligible to the users of other Indian languages. The same alphabet with one or two additions could be used for teaching correct pronunciation of the different European languages. But the greatest gain from the establishment of a scien- tific English alphabet would be that the English language would then become easy to learn by the peoples of all countries. The world would thus acquire an international medium of communication which would be of immense commercial and social value both to ourselves and to