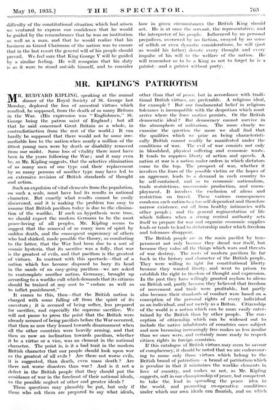 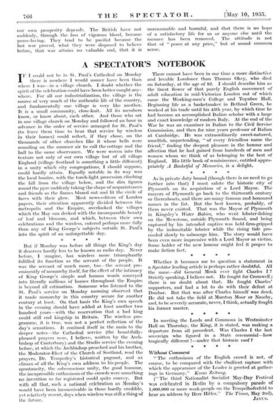 MR. RUDYARD KIPLING, speaking at the annual dinner of the Royal Society of St. George last Monday, deplored the loss of ancestral virtues- which resulted, he supposed, from the death of so many Britons in the War. (His expression was "Englishmen," St. George being the patron saint ill& England ; but all that he said concerned Great Britain as a whole, in contradistinction from the rest of the world.) It can hardly be supposed that there would not be some irre- mediable loss to the nation when nearly a million of the fittest young men were by death or disability removed from our midst: Some loss of vitality there m,ust have been in the years following the War ; and it may even be, as Mr. Kipling. suggests, that the selective elimination of so many men of one type and their replacement by so, many persons of another type may have, led, to an .extensive revision of British standards of thought and action. . Such an expulsion olvital elements from the population, on such a, scale, must have had its results in national character. But exactly what results cannot be _easily disCovered; and it is making the 'problem-. too' easy, to assume that British pacifism today is due to the elimina- tion of the . warlike. If such an hypothesis were true, we should expect the modern Germans to be the most peace-loving of all peoples. Mr: Kipling seems to suggest that the removal of so many Men of spirit by sudden' death, and the consequent supremacy of others who had shirked, made possible the theory, so comforting to the latter, that the War had been due to a sort of cosmic hysteria, that its sacrifice was a folly, that war is the greatest of evils, and that pacifism is the greatest of virtues. In contrast with this spectacle—that of a nation which has become disposed to bury its head in the sands of an easy-going pacifism—we are asked to contemplate another nation, Germany, brought up according to a warlike cult which demands that its citizens should be trained at any cost to "endure as well as to inflict punishment." It comes to . this, then—that the .British nation is charged with some falling off from the spirit of its ancestors ; it is accused of being softer, less prepared for sacrifice, and especially the supreme sacrifice. We will not' pause -to press the point that the British Were already aceused of being pacifists before the War occurred, that then as now they' leaned towards disarmament when all the other countries were heavily- arming, and that then as now an inclination towards pacifism, whether it be a virtue or a vice, was an clement in the national character. The point' is, is it a bad trait in the modern British character that our people should look upon war as the greatest of all evils ? Are there not worse evils, it is suggested, than death, even mass death ? Are there not worse disasters than war ? And is it not a defect in the British people that they should put the avoidance of war in the forefront of their national ideals, to the possible neglect of other and greater ideals ?

These questions may plausibly be put, but only if those who ask them are prepared to say what ideals, other than that of peace, but in accordance with tradi- tional British virtues, are preferable. A religious ideal, for example ? But our fundamental belief in religious tolerance is incompatible with the despotism which must arrive where the force motive persists. Or the British democratic ideal ? But democracy cannot survive in the atmosphere of militarism. The more closely we examine the question the more we shall find that the qualities which we prize as being characteristi- cally British cannot readily be manifested under the conditions of war. The evil of war consists not only in bloodshed, physical suffering and economic waste. It tends to suppress liberty of action and speech. A nation at war is a nation under orders in which dictators come to the top. The prospect of war, whether it involves the fears of, the possible victim or the hopes of an aggressor, leads to a demand in each country to be, self-contained, and so to economic nationalism, trade restrictions, uneemoinic production, and unem- ployment. It involves the exclusion of aliens and restriction on travel. These various consequences condemn each nation to a too self-dependent and therefore narrow existence, cut off from healthy intimacies with other people ; and the general regimentation of life which follows when a strong central authority sets itself to prepare for war and organize economic supplies leads or tends to lead to dictatorship under which freedom and tolerance disappear.

The British people are in the main pacifist by tem- perament not only because they dread war itself, but because they value all the things which wars and threats of war destroy. The roots of modern pacifism lie far back in the history and character of the British people. They were willing to light for constitutional liberty because they wanted liberty, and went to prison to establish the right to freedom of thought and expression. In the past they have willingly granted asylum to aliens on British soil, partly because they believed that freedom of movement and trade were profitable, but partly also because their standards of conduct were based on a conception of the personal rights of every individual as an individual, and not merely as a Briton. Citizenship of the world is a notion which can be more easily enter- tained by the British than by .other people. The con- ception . of citizenship which can be widened out to include the native inhabitants of countries once subject and now becoming increasingly free makes us less insular than we once were, and certainly more ready to respect citizen rights in foreign countries.

If this catalogue of British virtues may seem to savour of complacency, it should be noted that we are endeavour- ing to name only those virtues which belong to the, British brand of patriotism—a brand of patriotism which is peculiar in that it minimizes the warlike elements in love of country, and makes us not, as Mr. Kipling suggests, soft in our championship of peace, but competent to take the, lead in spreading the peace idea in the world, and promoting co-operative conditions under which our own ideals can flourish, and on which our own prosperity depends. The British have not suddenly, through the loss of vigorous blood, become peace-loving. They tend to be pacifist because the last war proved, what they were disposed to believe before, that war attains no valuable end, that it is unreasonable and harmful, and that there is no hope of a satisfactory life for us or anyone else until the menace has been removed. The attitude is not that of "peace at any price," but of sound common sense.