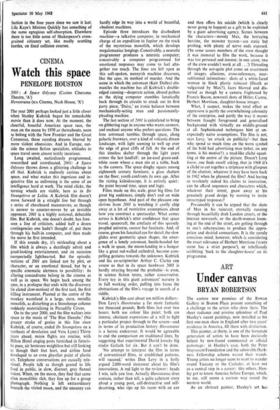 Herosiratus (IcA Cinema, Nash House, 'X') The year 2001 perhaps looked just a little closer when Stanley Kubrick began his remarkable movie than it does now. At the moment, the cheerful, boastful American space race, the man on the moon by 1970 or thereabouts, seem to belong with the New Frontier and the Great Consensus, those receding dreams blurred by more violent obsessions. And in Europe, out- side the science fiction specialists, attitudes to space travel seem almost testily incurious.

Long awaited, meticulously programmed, researched and coordinated, 2001: A Space Odyssey throws down a glittering challenge to all that. Kubrick is endlessly curious about space, and what makes this ingenious and in- quisitive film so enlivening is the sense of an intelligence hard at work. The mind clicks, the turning wheels are visible, here as in Dr Strangelove or Lolita. A Kubrick film doesn't move forward in a straight line but through a series of chessboard manoeuvres, as though in answer to counter-moves by an invisible opponent. 2001 is a highly notional, debatable film. But Kubrick, one doesn't doubt, has fore- seen a line of criticism, added half a dozen contingencies one hadn't thought of, put them through his built-in computer, and then made the move he first intended.

If this sounds dry, it's misleading about a film which is always a dazzlingly adroit and good-looking entertainment, and on occasion unexpectedly lighthearted. But the episodic sections of 2001 are linked not by plot, or character, or an emotional thread, but by a specific cinematic alertness to possibility: its alluring conundrums belong in the cinema as well as in space. We begin back among the apes, in a prologue that ends with the discovery (in elated slow-motion) of the first tool, the first killing instrument. Planted at the centre of the monkey wasteland is a large, stern, metallic monolith, as disturbing as a Stonehenge column suddenly materialising in Piccadilly Circus.

On to the year 2000, and the film waltzes into space to the music of The Blue Danube.' (No greater stroke of genius in this line since Kubrick, of course, ended Dr Strangelove on a synthesis of desolation and Vera Lynn.) Thirty years ahead, moon ffights are routine, with Hilton Hotel staging posts furnished in futuris- tic puce, air hostesses weightless but still looking as though their feet hurt, and airline food developed to an even ghastlier point of plastic art. Telephone conversations are casually tele- visual. People talk as though geared to life lived in public, in slow, discreet, grey flannel voices. When, on the moon, they find that same alien monolithic slab, they line up for a group photograph. Nothing is left extraordinary beneath the visited moon, and the uncanny can hardly edge its way into a world of beautiful, obedient machines.

Episode three introduces the disobedient machine—a talkative computer, in mechanical charge of an expedition to Jupiter on the track of the mysterious monolith, which develops megalomaniac longings. Conceivably, a neurotic programmer produces a neurotic computer; conceivably a computer programmed for emotional responses may come to feel alto- gether too much. The lines are left open as this soft-spoken, nannyish machine discovers, like the apes, its method of murder. And the scene in which the astronaut (Keir Dullea) dis- mantles the machine has all Kubrick's double- edged cunning—desperate action, absurd pathos as the dying computer stumbles lunatically back through its circuits to croak out its first party piece, 'Daisy,' an ironic balance between mechanically-acting man and passionately- pleading machine.

The last section of 2001 is calculated to bring on gibbering rage in anyone who wants answers, and enchant anyone who prefers questions. The lone astronaut tumbles through space, along galactic freeways, over a kind of volcanic dream landscape, with light seeming to well up over the edge of great cliffs of fall. At the end of this timeless skelter through the light years comes the last landfall: an ice-cool green-and- white room where a man sits at a table, back to the camera. The space dinghy squats among eighteenth century furniture; a glass shatters on the floor, youth confronts its own age. After the rioting kaleidoscope, it is entirely quiet: the point beyond time, space and logic.

Films made on this scale, great big films for great big audiences, simply don't end on wide open hypotheses. And part of the pleasure one derives from 2001 is watching it coolly chip away at a lot of restrictive assumptions about how you construct a spectacular. What comes across is Kubrick's utter confidence that space travel, spacecraft, the artefacts of this sparsely peopled universe, cannot but fascinate. And, of course, given his fanatical eye for detail, the slow glides over geometric space shapes, the emer- gence of a lonely astronaut, beetle-hooded for a walk in space, the moon-landing in a hangar like a great red-walled cathedral, become com- pelling gestures towards the unknown. Kubrick and his co-scriptwriter Arthur C. Clarke can assure us that in its space hardware 2001 is hardly straying beyond the probable—is even, in science fiction terms, rather conservative. Every toy in this giant astronauts' nursery is in full working order, pulling into focus the abstractions of the film's voyage in search of a riddle.

Kubrick's film cost about ten million dollars: Don Levy's Herostratus a far more fantastic ten thousand pounds. Both films last over two hours; both use colour like paint; both are intense, obstinate expressions of a will to fight a particular project through to the screen—and in terms of its production history Herostratus is a heroic endeavour. It would be agreeable to end the comparison on traditional lines, by suggesting that experimental David knocks big studio Goliath- for six. But it can't be done.

'No attempt to interpret the film in terms of conventional films, or established patterns, will succeed,' writes Don Levy in a hotly argued 2,000-word statement about his film's innovations. A red light to the reviewer: heads I win, tails you lose. Actually Herostratus does contain, rather than tell, a quite coherent story about a young poet, self-destructive and self- deceiving, who rips up his room with an axe and then offers his suicide (which is clearly never going to happen) as a gift to be exploited by a giant advertising agency. Scenes between the characters—moody Max, the betraying heroine, the monster tycoon—are static but probing, with plenty of nerve ends exposed. (In some scenes members of the crew thought it was immoral to film the work, because it was too personal and intense; in one scene, two of the crew couldn't work at all Threading through the not-quite plot come an assortment of images, allusions, cross-references, near- subliminal intimations : shots of a white-faced woman in black plastic raincoat (Death as vulgarised by Max?), faces blurred and dis- torted as though by a camera frightened by Francis Bacon, newsreel shots of Hitler, Castro, Herbert Morrison, slaughter-house images.

What, I suspect, makes the total effect so oppressive is partly the overwhelming solemnity of the enterprise, and partly the way it moves between fraught foreground and generalised background with virtually no middle-ground at all. Sophisticated techniques hint at un- expectedly naive assumptions. The film is not, says Levy, 'an attack on publicity'—but then why spend so much time on the worn symbol of the bold bad advertising man (what, on any terms, is his motive?), a toad-like cliché squat- ting at the centre of the picture. Doesn't Levy know, one finds onself asking, that in 1968 it's a cliché to cut together a striptease with glimpses of the abattoir, whatever it may have been back in 1962 when he planned the film? And having so resolutely staked his claims to innovation, can he afford sequences and characters which, whatever their intent, gnaw away at his genuinely grand design by seeming to invite stereotyped responses?

Presumably it can be argued that the shots of Max in his raincoat, eternally running through beautifully drab London streets, or the intercut newsreels, or the death-woman loom- ing at the end of the street, are getting through to one's subconscious to produce the appro- priate and desired connections. It is the unruly conscious mind, however, which is considering the exact relevance of Herbert Morrison ('every scene has a strict purpose'), or rebelliously scribbling 'back to the slaughter-house' on its programme.