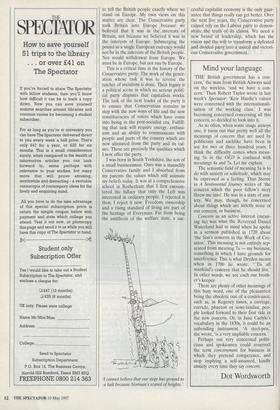 'THE British government has a con- cern,' the man from British Airways said on the wireless, 'and we have a con- cern.' Then Robert Taylor wrote in last week's Spectator: `Keir Hardie's values were concerned with the internationali- sation of the working class.' I was becoming concerned concerning all this concern, so decided to look into it.

As so often, when some usage annoys one, it turns out that pretty well all the meanings of concern that are used by politicians and suchlike have been in use for two or three hundred years. I think the difficulty comes when mean- ing 5a in the OED is confused with meanings 4a and 7a. Let me explain.

The semantic field of meaning 5a is to do with anxiety or solicitude, which may be expressed as a feeling. Thus Sterne in A Sentimental Journey writes of 'the concern which the poor fellow's story threw me into'. He was in a state of anx- iety. We may, though, be concerned about things which are strictly none of our concern, or business.

Concern as an active interest (mean- ing 4a) was what the Reverend Daniel Waterland had in mind when he spoke in a sermon published in 1720 about 'the Son's concern in the Work of Cre- ation'. This meaning is not entirely sep- arated from meaning 7a — my business, something in which I have grounds for interference. This is what Dryden meant when in 1700 he wrote: " Tis all mankind's concern that he should live.' In other words, we are each our broth- er's keeper.

There are plenty of other meanings of this busy word, one of the pleasantest being the obsolete one of a contrivance, such as, in Regency times, a carriage, curricle, phaeton or semi-landau; peo- ple looked forward to their first ride in the new concern. Or, in Jane Carlyle's vocabulary in the 1830s, it could be an unbending instrument. 'A steel-pen,' she wrote, 'is a very unpliable concern.'

Perhaps our very concerned politi- cians and spokesmen could resurrect the term concernment for business in which they pretend competence, and stop implying a self-assumed, kindly anxiety every time they say concern.