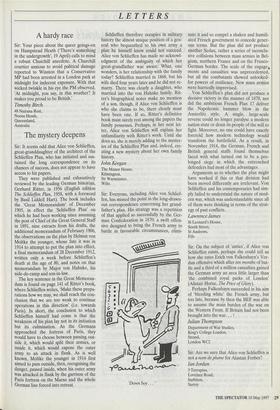 Sir: It seems odd that Alice von Schlieffen, great-granddaughter of the architect of the Schlieffen Plan, who has initiated and sus- tained the long correspondence on its chances of success, does not appear to have access to his papers. They were published and exhaustively reviewed by the leading German historian, Gerhard Ritter, in 1956 (English edition The Schlieffen Plan, 1958, with a foreword by Basil Liddell Hart). The book includes the 'Great Memorandum' of December 1905, in effect the 'Schlieffen Plan' on which he had been working since assuming the post of Chief of the Great General Staff in 1891, nine extracts from his drafts, the additional memorandum of February 1906, the observations on the plan by Helmut von Moltke the younger, whose fate it was in 1914 to attempt to put the plan into effect, a final memorandum of 28 December 1912, written only a week before Schlieffen's death at the age of 80, and notes on that memorandum by Major von Hahnke, his aide-de-camp and son-in-law.

The key sentence in the Great Memoran- dum is found on page 141 of Ritter's book, where Schlieffen writes, 'Make these prepa- rations how we may, we shall reach the con- clusion that we are too weak to continue operations in this direction' (i.e. towards Paris). In short, the conclusion to which Schlieffen himself had come is that the weakness of his plan lay not in its initiation but its culmination. As the Germans approached the fortress of Paris, they would have to choose between passing out- side it, which would split their armies, or Inside it, which would expose the outer army to an attack in flank. As is well known, Moltke the younger in 1914 first aimed to pass outside, then, recognising the danger, passed inside, when his outer army was attacked in flank by the garrison of the Paris fortress on the Marne and the whole German line forced into retreat. Schlieffen therefore occupies in military history the almost unique position of a gen- eral who bequeathed to his own army a plan he himself knew could not succeed. Alice von Schlieffen has made no acknowl- edgment of the ambiguity of which her great-grandfather was aware. What, one wonders, is her relationship with the family today? Schlieffen married in 1868, but his wife died four years later and he did not re- marry. There was clearly a daughter, who married into the von Hahnke family. Rit- ter's biographical notes make no mention of a son, though, if Alice von Schlieffen is who she claims to be, there clearly must have been one. If so, Ritter's definitive book must surely rest among the papers the family possesses. Perhaps, in her next let- ter, Alice von Schlieffen will explain her unfamiliarity with Ritter's work. Until she does so, she is merely adding to the myster- ies of the Schlieffen Plan and, indeed, cre- ating a new mystery about her own family history.