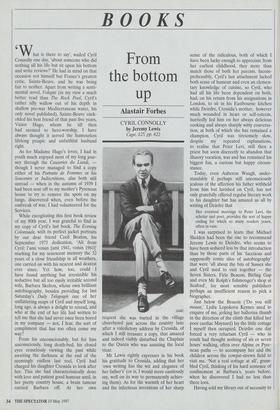 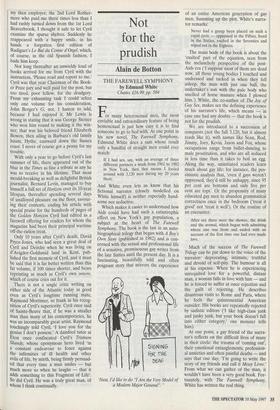 From the bottom Up

CYRIL CONNOLLY by Jeremy Lewis Cape, QS, pp. 622 hat is there to say', wailed Cyril Connolly one day, 'about someone who did nothing all his life but sit upon his bottom and write reviews?' He had in mind on that occasion not himself but France's greatest critic, Sainte-Beuve, and he was being fair to neither. Apart from writing a senti- mental novel, Volupte (in my view a much better read than The Rock Pool, Cyril's rather silly wallow out of his depth in shallow pre-war Mediterranean water, his only novel published), Sainte-Beuve cuck- olded his best friend of that past five years, Victor Hugo, whom he till then had seemed to hero-worship. I have always thought it served the humourless lifelong priapic and unfaithful husband right.

As for Madame Hugo's lover, I had in youth much enjoyed most of my long jour- ney through the Causeries du Lundi, — though I never managed to find a copy either of his Portraits de Femmes or his Souvenirs et Indiscretions, alas both still unread — when in the autumn of 1939 I had been sent off to my mother's Pyrenean house to try to remove the spots on my lungs, discovered when, even before the outbreak of war, I had volunteered for the Services.

While excogitating this first book review of my 80th year, I was grateful to find in my copy of Cyril's last book, The Evening Colonnade, with its perfect jacket portraits by our dear friend Cecil Beaton, his September 1973 dedication, 'Ali from Cyril: l'ami voisin [ami 1941, voisin 19611' marking for my senescent memory the 32 years of a close friendship in all weathers, one carried on with his nearest and dearest ever since. Yet how, too, could I have found anything but irresistible his seductive but all too easily irritable second wife, Barbara Skelton, whose own brilliant autobiography, besides providing for last Saturday's Daily Telegraph one of her unflattering snaps of Cyril and myself long, long ago, is always a delight to reread, and who at the end of her life had written to tell me that she had never once been bored in my company — not, I fear, the sort of compliment that has too often come my way?

From his unconscionably, but for him unconsciously, long death-bed, his closed eyes ceaselessly viewing the past while awaiting the darkness at the end of the seemingly endless last reel, Cyril had charged his daughter Cressida to look after her. This she had characteristically done with love and patient good humour until, in her pretty country house, a brain tumour carried Barbara off. At her own request she was buried in the village churchyard just across the country lane after a valedictory address by Cressida, of which I still treasure a copy, that amazed and indeed visibly disturbed the Chaplain to the Queen who was assisting the local vicar.

Mr Lewis rightly expresses in his book his gratitude to Cressida, adding that her 'own writing has the wit and elegance of her father's' (or is, I would more cautiously say, well on its way to permanently achiev- ing them). As for the warmth of her heart and the infectious inventions of her sharp sense of the ridiculous, both of which I have been lucky enough to appreciate from her earliest childhood, they more than match those of both her parents. Incom- prehensibly, Cyril's last attachment lacked both sense of humour and even an elemen- tary knowledge of cuisine, so Cyril, who had all his life been dependent on both, had, on his return from his assignations in London, to sit in his Eastbourne kitchen while Deirdre, Cressida's mother, however much wounded in heart or self-esteem, hurriedly fed him on her always delicious cooking and always sharply witty conversa- tion, at both of which she has remained a champion. Cyril was tiresomely slow, despite my repeated explanations, to realise that Peter Levi, still then a priest but soon discreetly to abandon that illusory vocation, was and has remained his biggest fan, a curious but happy circum- stance.

Today, even Auberon Waugh, under- standably if perhaps still unconsciously jealous of the affection his father withheld from him but lavished on Cyril, has not only gratefully offered regular literary work to his daughter but has amazed us all by writing of Deirdre that Her eventual marriage to Peter Levi, the scholar and poet, provides the sort of happy ending for which so many readers yearn, often in vain.

I was surprised to learn that Michael Shelden had been the one to recommend Jeremy Lewis to Deirdre, who seems to have been seduced less by that introduction than by those parts of his 'facetious and supposedly comic slice of autobiography' that were 'all about the bits of Sussex she and Cyril used to visit together — the Seven Sisters, Firle Beacon, Birling Gap and even Mr Rolph's fishmonger's shop at Seaford', for most sensible publishers perhaps an insufficient reason to pick a biographer.

Just below the Beacon (Do you still mount,' Lydia Lopokova Keynes used to enquire of me, jerking her ballerina thumb in the direction of the climb that killed her poor cardiac Maynard) lay the little cottage I myself then occupied. Deirdre one day forced a very reluctant Cyril — who in youth had thought nothing of six or seven hours' walking, often over Alpine or Pyre- nean paths — to accompany her and the children across the cowpat-strewn field to visit me. Not a real cottage at all', grum- bled Cyril, thinking of his hard sentence of confinement at Barbara's, years before, when he discovered I had no less than three loos.

Having sold my library out of necessity to my then employer, the 2nd Lord Rother- mere who paid me three times less than I had rashly turned down from the 1st Lord Beaverbrook, I thought it safe to let Cyril examine the sparse shelves. Suddenly he reappeared with a happy smile, in his hands a forgotten first edition of Radiguet's Le Bal du Comte d'Orgel, which, of course, in the old Spanish fashion, I bade him keep.

Not long thereafter an unwieldy load of books arrived for me from Cyril with the instruction, 'Please read and report to me.' Cyril was that year Chairman of the Book- er Prize jury and well paid for the post, but too tired, poor fellow, for the drudgery. From my exhausting task I could select only one volume for his consideration, John Berger's G, not, I hasten to add, because I had enjoyed it. Mr Lewis is wrong in stating that it was George Steiner who won him round to making it the win- ner; that was his beloved friend Elizabeth Bowen, then ailing in Barbara's old family haunt, Hythe, eastward down the Sussex coast. I never of course got a penny for my trouble.

With only a year to go before Cyril's last summer of life, there appeared out of the blue in the Times as fine a tribute as any he was to receive in his lifetime. That most mould-breaking as well as delightful British Journalist, Bernard Levin, managed to buy himself a full set of Horizon over its 10-year lifespan, thereafter spending several days of unalloyed pleasure on the floor, savour- mg their contents, ending his article with special praise for the hundreds of pages of the Golden Horizon Cyril had edited as a farewell offering for readers for whom the magazine had been their principal wartime off-the-ration treat.

Only 10 years after Cyril's death, David Pryce-Jones, who had seen a great deal of Cyril and Deirdre when he was living on d'Avigdor-Goldsmid land in Kent, pub- lished the first memoir of Cyril, and it must be said that it is far better written than this fat volume, if 100 times shorter, and bears reprinting as much as Cyril's own oeuvre, which of course cries out for it.

There is not a single critic writing on either side of the Atlantic today as good even as Cyril's longtime running mate, Raymond Mortimer, so frank in his recog- nition of Cyril's superiority. Cyril once said of Sainte-Beuve that, if he was a smaller man than many of his contemporaries, he was an incomparably great artist. Raymond touchingly told Cyril, 'I love you for the genius I don't possess.' A damfool tutor at Eton once confiscated Cyril's Tristram Shandy, whose eponymous hero lived 'in a constant endeavour to fence against the infirmities of ill health and other evils of life, by mirth, being firmly persuad- ed that every time a man smiles — but much more so when he laughs — that it adds something to this Fragment of Life'. So did Cyril. He was a truly great man, of whom I think continually.