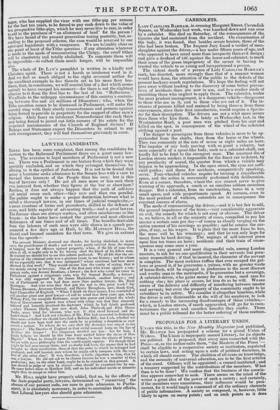 LADY CAROLINE BARHAM, in crossing Margaret Street, Cavendish Square, on Wednesday last week, was knocked down and run over

by a cabriolet. She died on Saturday, of the consequences of the

injuries she had sustained from the accident. On examination of the body, it was found, that besides severe bruises, three of the ribs bad been broken. The Inquest Jury found a verdict of man- slaughter against the driver,—a boy under fifteen years of age, and who appeared to have erred more from incapacity than evil design; and gave a deodand of 50/. against the horse and cabriolet, to mark their sense of the gross impropriety of the owner in having in- trusted the vehicle to so young and inexperienced a person. The violent death of a person of Lady CAROLINE BARHAM'S rank, has directed, more strongly than that of a meaner woman would have done, the attention of the public to the defects of the present hackney-coach regulations. We hope the feeling will not pass away without leading to the discovery of some better preven- tives of accidents than are now in use, and to a readier mode of punishing those who neglect to apply them. The cabriolet, under the most prudent management, is a dangerous vehicle—dangerous to those who are in it, and to those who are out of it. The in- stances of persons killed and maimed by being thrown from these conveyances, since their first introduction, would require a Specta- tor for their description. The drivers are not a whit more secure than those who hire them. So lately as Wednesday last, in the Westminster Road, a poor man was pitched from his seat and killed on the spot, in consequence of the wheel of the cabriolet striking against a post. The danger to passengers from these vehicles is more to be ap- prehended from the shafts, than from the horse or the wheels. They run commonly at the rate of seven or eight miles an hour. The impulse of any body moving with so great a velocity, but more especially of a spear-like body, such as a cabriolet-shaft, can hardly fail to be fatal to the strongest man. The constant din of London streets renders it impossible for the finest ear to detect, by any peculiarity of sound, the quarter from which a vehicle may happen to be approaching. In the open street, the eyes are suffi- cient guides; and there few accidents, comparatively speaking, occur. Four-wheeled vehicles require for turning a considerable space, and the action is necessarily performed with deliberation. Even at a corner, therefore, where the eye cannot serve to give warning of its approach, a coach or an omnibus seldom occasions danger. But a cabriolet, from its construction, turns in a very small space, and with proportionate speed. At corners, even to the most prudent of walkers, cabriolets are in consequence the constant sources of alarm.

The mode of remunerating the driver,—and it is but fair to add, the general impatience of the hirer,—very considerably aggravate an evil, the remedy for which is not easy or obvious. The driver is, we believe, in all or the majority of cases, compelled to pay his master a certain sum per day—of course as closely verging on the entire amount of his earnings as possible ; and he retains the sur- plus, if any, as his wages. It is plain float the more fares he has, the more will be his winnings ; and that he can only hope for many fares by hard driving. The urgings of self-interest press upon him ten times an hour; accidents and their train of conse- quences may come once a year. It is a very general and most disgraceful rule, among London masters, to ask for no one qualification in their servants but pecu- niary responsibility; if that be insured, the character of the servant is complete. The most reckless ruffian that ever escaped the gal- lows or graced it, if he guarantee a guinea, with no greater waste of horse-flesh, will be engaged in preference to the most discreet and worthy man in the metropolis, if he guarantee but a sovereign. A cabriolet-driver, who gains money for its owner, need care for nothing else; his place is secure, let him do as he will. We are aware of the delicacy and difficulty of interfering between master and servant; but even the property of the community ought to be subsidiary to its safety. We consider it altogether hopeless, while the driver is only dismissable at the will of his employer, to look for a remedy to the increasing disadvantages of these vehicles,— which, in London streets, if much aggravated, will go far to coun- terbalance the great and manifest benefits they confer. There. must be a public tribunal for the better ordering of these matters.