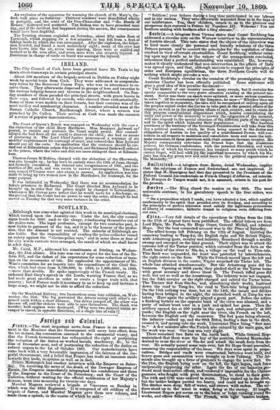 Edinburgh was somewhat agitated this week in its municipal elections, Whitit turned upon the Annuity-tax. tinder the Act, the city council signs bonds for 6001. each to the clergy, reimbursing themselves out of the police-rate. The legal profession, exempt for two centuries past, is now liable to payment of the tax, and it is to the honour of the profes- sion, that the demand is- not resisted. The suburbs of Edinburgh are also liable. But the impossibility of evading the police-collector raised an outer), against the " clerieo-police rate," and in some three or four of the city wards contests were arranged, the result of which we shall know

Mr. Caird, M.P., addressed his constituents at Stirling, on. Wednes- ,clay,, the 314 ultimo. His tone was one of regret for the loss of the-Re- form Bill, and the defeat of his expectation for some reduction of taxa- tion on the necessaries of life. He applauded the appointment of Mr. Wins's committee for an inquiry into the expenditure of the Civil Ser- vice, which bad risen from 3,700;000, in 1848, to 7,800,0001., in 1860, -more than double. lie spoke approvingly of the French treaty. He endorsed Earl Grey's speech in the Lards, warning France that, as we had made great sacrifices in order to create ,.e larger trade 3vith that country ; but if France made to us to keep unend increase a large army, we might not be able to id the reduction.

- On the Monkland Railway, two locomotives came into collision, on Wed- nesday, the 31st. The fog prevented the drivers seeing each other's ap- proach until within a short distance. One driver jumped. off, the other, was thrown off, and-flee stokers were able to save themselves, The shock was terrifio; both engines were destroyed. [Why were two mineral trains ar- ranged to travel, in opposite directions, on a single line of rails ?]