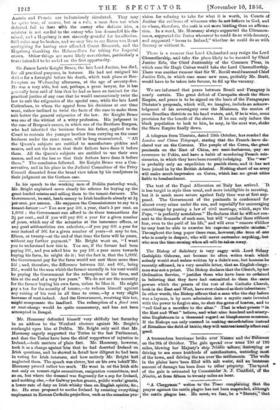 Page 1, 10 November 1866 — The Kaiser, it appears, does not respect Nathan Rothschild's advice
Close

The Kaiser, it appears, does not respect Nathan Rothschild's advice

never to deal with a very unlucky man, for he has ap- pointed Baron von Beust Minister for Foreign Affairs. The Baron has issued a circular, saying that, baying become an Austrian, he has left all prejudices behind him, and intends; to pursue a mild and conciliatory policy, and rumours of a rapprochement between Austria and Prussia are industriously circulated. They may be quite true, of course,. but ae a rule, a even does not when defeated fall in ;love Webh the enemy who defeats. him, :a minister is not cordial to the enemy who has demanded his dis- missel, and a Hapsburg is-not siacerebegratieful for humiliation. Still rules may be broken, and we may live to see Baron von Benet apologizing for having ever offended Count Bismarck, and the Hapsburg thanking the Hohenzellern for taking the Imperial crown. Other things are more likely nevertheless, particularly a trues intended to be ended on the filet opportunity.