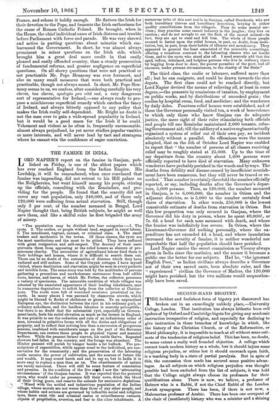 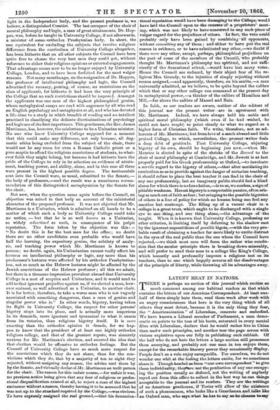 THE feeblest and foolishest form of bigotry yet discovered has broken out in an exceedingly unlikely place,—University College, London. That institution has always hitherto been evil- spoken of by Oxford and Cambridge bigots for giving any academic instruction irrespective of religion, and especially for declining to give instruction in those branches of knowledge in which, like the history of the Christian Church, or of the Reformation, or Moral philosophy, it is impossible to teach at all without some esti- mate of the tendencies of religious belief. This has been, no doubt, to some extent a really well founded objection. A college which cannot teach modern history as a whole, lest it should injure some religious prejudice, or ethics lest it should encroach upon faith, is a teaching body in a state of partial paralysis. But in spite of this, the concession thus made has secured some positive advan- tages. As all subjects on which religious prejudice was thought possible had been excluded from the list of subjects, it was held that the College might always choose its professors for their qualifications alone. There is now, we believe, a professor of Hebrew who is a Rabbi, if not the Chief Rabbi of the London Jewish synagogues. There has been, if there is not now, a Mahometan professor of Arabic. There has been one occupant of the chair of (mutilated) history who was a minister and a shining light in the Independent body, and the present professor-is, we believe, a distinguished Comtist. The last occupant of the chair of mental philosophy and logic, a man of great attainments; Dr. Hop- pus, was, before he taught in University College, if n.otwfterwards, a minister of somesorthodox :Presbyterian body. ' In -short, the one equivalent for-excluding the subjects that involve religious difference from the curriculum of University College altogether, has-been hitherto that on all other subjecte the Council have been quite free to choose the very best men they could get, without reference to either their religious opinions or external engagements. That a.dvantego seems now to be no longer enjoyed by University College, London, and to have been forfeited for the most vulgar reasons. Not many months ago, on the resignation of Dr. Hoppus, the professor of intellectual, philosophy and logic, the Council advertised the vatteucy, -putting, of course, no restrictions -on the class of applicauf.s, for hitherto it had been the very principle of the College that no such restrictions should be imposed. Amongst the applicants was one man of• the highest philosophical genius, whose metaphysical essays are read with eagerness by alleyho read on English psychology and metaphysics at all, and who has devoted a life-time to a study in -which breadth of reading and an intellect practised in classifying the delicate discriminations of psychology and logic are of the first importance. This gentleman, the Rev. James Martineau, has, however, the misfortune to be a Unitarian minister. No one who knew University College supposed for , a moment that this could make any difference, not only because, all dog- matic ethics being excluded from the subject of the chair, there would not be any room for even a Roman Catholic priest or a pure sceptic to offend the religious convictions of students, to what- ever faith they might belong, but because it had hitherto been the pride of the College to rely in its selection on evidence of attain- ment, teaching power, and ability, alone, and in this ease all three were present in the highest possible degree. The testimonials sent into the Council were, as usual, submitted to the Senate,— the body of professors,—and the result was a unanimous recom- mendation of this distinguished. metaphysician by the Senate for the chair.

But now, when the question came again before the Council, an objection was raised in that body on account of the ministerial character of the proposed professor. It was not objected that Mr. Martineau is a Unitarian, which is admitted on all hands to be a matter of which such a body as University College could take no notice, — but that he is so well known as a Unitarian, so widely advertised as such, in consequence of his pulpit reputation. The form taken by the objection was this : — "No doubt this is far the best man for the office ; no doubt there are no other candidates even probable who would have half the learning, the expository genius, the subtlety of analy- sis, aud teaching power which Mr. Martineau is known to possess; no doubt, again, his Unitarianism cannot really affect his lectures on intellectual philosophy or logic, any more than his predecessor's lectures were affected by his orthodox Presbyterian- ism, not so much as the Hebrew lectures might be,affected by the Jewish convictions of the Hebrew professor ; all this we admit, but there is a tiresome impression prevalent abroad that University College is a nest of sceptics and Unitarians,-and it would tend to add to that ignorant prejudice against us, if we elected a man, how- ever eminent, so well advertised as a Unitarian, to another chair. It is far better, therefore, to take a worse man who is not vaguely associated--with something dangerous, than a man of genius and singular power who is." In other words, bigotry, having taken its flight in University College, the respect for other persons' bigotry steps into its place, and is actually more imperious in its demands, -more ignorant and tyrannical in what it exacts from its votaries, than religious - bigotry itself. It is more exacting than the orthodox opinion it dreads, for we hap- pen to know that the president of at least one highly orthodox religious college, and that of the greatest repute, was sincerely anxious for Mr. Martineau's election, and scouted the idea that that election would be offensive to orthodox feelings. But the Council of University College have so much more respect for the convictions which they do not share, than for the con- victions which they do, that by a majority of ten to eight they rejected, without assigning any-reason, the -advice sent them by by; the Senate, and virtually declared. Mr. Martineau an unfit person forthe chair. The reason for,this unfair course,—for unfair it was, no previous-notice being given that any -fear of religious or profes- eional disqualification existed at all,-to reject a man of the highest eminence without areason, thereby leaving it to be ossamed that he was not up to the staadardrequired by-the College,--was obvious. To have expressly assigned the real ground,—that-his deuomina- tionalreputation would have been-damaging to the Callege, would have laid ehe,Council open,to-the censure, of a proprietors' meet- ing; which was :not likely to have-noneurred in any each piece of vulgar regard forthe prejudiees of :others. In -fent; the I:cote-could probably only -have been gained by edmbiting dill- opponents, without committing any of- them;- and hither- to' have put the real reason in evidence, or to have substituted-any other,—we -doubt if there were- any other, except,:perhaps, philosophical prejudices on the part of -some of the members of the CouneiloVho probably thought Mr. •Martineau's philosophy too spiritual, and not inffi- ciently of the: Sensational school, --would have lost many tote& Hence the Council are reduced, by their abject fear of the re- ligious Mrs. Grundy, to the injustice of simply rejeetiiig Without reason assigned,—and -apparently, therefore, on his merits,—a man universally admitted, as we believe, to be quite beyond the calibre which that or any other college can command at the present day in metaphysical power,—a thinker of the calibre of Hamilton and Mill,—far above the calibre of Mansel and Bain.

In faith, as our readers are aware, -neither of the :editors of this journal nor the present writer are in-. agreement with Mr. Martineau. Indeed, we -have always held his noble and spiritual moral philosophy (which even if he had :wished, -he could not -have taught) to point clearly to what we regardeas a higher form of Christian- faith. We write, 'therefore, not as-ad- herents of Mr. Martineau; but from love of a much abused.and little praised College, -to --which, - nevertheless, theepresent t'writer feels a deep debt of gratitude. That University College, abjuring bigotry of its own, should be beginning just now,—when Mr. Maurice is elected in spite -of the -shrieks iff- the Record to the chair of moral philosophy at Cambridge, and Mr. Jewett is at last properly paid for his Greek professorship at Oxford,—,to ineuleate a servile regard to the bigotry of others,-&--that after mutilating its curriculum so as to provide against the danger of sectarian teaching, it should refuse to place the best teacher it can find in the chair of any one professorship, lest an imaginary public should -feel a blind alarm for which there is nofoundation,—is to us, we confess, a signof pitiable weakness. Honest bigotry is- a-respectable passion; of ten aria- -lug as much oat of faith as fear; bat cringing-to the possible bigotries of othens is a-line of policy for which no human being can feel any emotion but contempt. The filling up of a vacant chair in a college is a--great trust,ewhich ought,to be discharged with a single eye to one thing,-and one thing alone,—the advantage of the taught. When it is known that University College, professing no other criterion, is limiting itself by deferring to the shadow cast by the ignorant superstitions of possible bigots, —with the very pro- bable result of obtaining a teacher far more likely to excite distrust in the eyes of the real public than the one whom the Council have rejected,—we think most men will _forni the rather wise eonclu- enon-that the secular principle there is breaking down-miserably, and will prefer to send their sons to a college like King's College, which honestly and professedly imposes a religious test on its teachers, than to one which -happily-secures all the disadvantages of the principle of liberty, while throwing all its advantages-away.