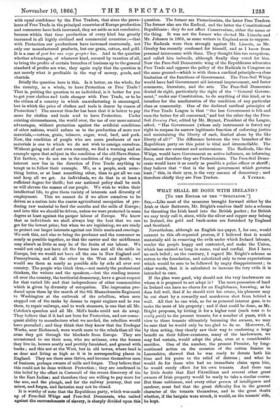 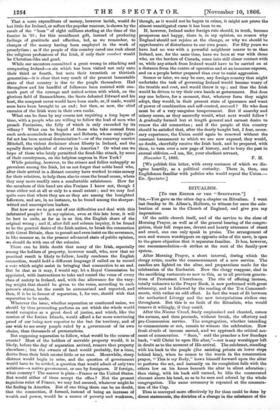 WHAT SHALT, BE DONE WITH IRELAND?

[To THE EDITOR OF THE "SPECTATOR."] SIR,—Like most of the measures brought forward either by the Irish or their flatterers, Mr. Bright's resolves itself into a scheme for thrusting the Irish hand into the British pocket ; for British we may truly call it, since, while the silver and copper may belong to Ireland, the gold and bank-notes are furnished by England and Scotland.

Nevertheless, although an English tax-payer, I, for one, would consent to this oft-repeated process, if I believed that it would materially aid in removing the evils under which Ireland labours, render the people happy and contented, and make the Union, which has existed so long in name, real and cordial. But I have no such belief ; on the contrary, I regard Mr. Bright's scheme as rotten to the foundation, and calculated only to raise expectations which would be sure to be followed by angry disappointment ; in other words, that it is calculated to increase the very evils it is intended to cure.

If the plan were good, why should not the very landowners on whom it is proposed to act adopt it? The mere possession of land in Ireland can have no charm for an Englishman, knowing, as he does full well, that if he should visit his estate, his pleasure may be cut short by a cowardly and murderous shot from behind a wall. All that he can wish, so far as personal interest goes, is to make the most of his property ; and if that could be done, as Mr. Bright proposes, by letting it for a higher rent (such rent to be really paid) to the present tenants, for a number of years, with a view to these tenants ultimately becoming the owners, we may be sure that he would only be too glad to do so. Moreover, if, by thus acting, they clearly saw their way to conferring a large benefit on their fellow-creatures, many of the landowners, we may feel certain, would adopt the plan, even at a considerable sacrifice. One of the number, the present Premier, by long- continued action on the occasion of the cotton famine in Lancashire, showed that he was ready to devote both his time and his purse to the relief of distress ; and what he would do for those who had no immediate claim upon him, he would surely effect for his own tenants. And there can be little doubt that Earl Fitzwilliam and several other great owners of Irish property would be ready to take a similar comm. But these noblemen, and every other person of intelligence and candour, must feel that the great difficulty lies in the general character of the tenants themselves, and in the great doubt whether, if the bargain were struck, it would, on the tenants' side, be kept. That a mere expenditure of money, however lavish, would do but little for Ireland, or soften the popular rancour, is shown by the result of the " loan " of eight millions sterling at the time of the famine in '46; for this munificent gift, instead of producing feelings of gratitude and affection, led, as we remember, to charges of the money having been employed in the work of proselytism ; as if the people of this country cared one rush about the religious professions of the Irish, if only their conduct would be Christian-like arid good.

While our ancestors committed a great wrong in attacking and conquering Ireland—a sin which has been visited not only unto their third or fourth, but unto their twentieth or thirtieth generation—it is clear that very much of the present lamentable state of that country is due to the people themselves. Had Strongbow and his handful of followers been resisted with one- tenth part of the courage and united action with which, on the glorious field of Bannockburn, the Scots defeated Edward and his host, the conquest never would have been made, or, if made, would soon have been brought to an end; but then, as now, the chief enemies of the Irish were in their own ranks.

What can be done by any course not requiring a long lapse of time, with a,people who are willing to follow the lead of men who preach Fenianism, the folly of which is only exceeded by its villany ? What can be hoped of those who take counsel from such arch-scoundrels as Stephens and Roberts, whose only right- ful act has been mutual denunciation ?—or of the runaway convict Mitchell, the violent declaimer about liberty in Ireland, and the equally fierce upholder of slavery in America ? Or what can we lope of those who lately permitted the fiend-like attack, by some of their countrymen, on the helpless negroea in New York?

While pointing, however, to the crimes and follies unhappily so prevalent among the Irish, let us not forget that noble band who, after their arrival in a distant country have worked to raise money for their relatives, to help them also to cross the broad ocean, where they may more readily earn a comfortable subsistence. How far the members of this band are also Fenians I know not, though I trust either not at all or only to a small extent ; and we may feel quite sure that where they are so they are among the benighted followers, and are, in no instance, to be found among the sharper- witted and unscrupulous leaders.

But how are we to get out of our difficulties and deal with this infatuated people ? In my opinion, even at this late hour, it will be best to undo, as far as in us lies, the English share of the original wrong ; and if, after full and solemn inquiry, it be found to be the general desire of the Irish nation, to break the connection with Great Britain, then to permit and even insist on the severance, in like manner as, in the present advanced state of public opinion, we should do with one of the colonies.

There can be little doubt that many of the Irish, especially among the holders of property, however small, who, now that no practical result is likely to follow, loudly condemn the English connection, would hold a different language if called on to record a vote which might assist in bringing that connection to an end. But be that as it may, I would say, let a Royal Commission be appointed, with instructions to take and record the votes of every class of society in Ireland, and, with due allowance for the vary- ing weight that should be given to the votes, according to each person's status, let the result be summarized and reported, and then, if it be in favour of separation, I, for one, should wish that separation to be made.

Whatever the issue, whether separation or continued union, we

should by thus proceeding perform an act which the whole world would recognize as a great deed of justice, and which, like the cession of the Ionian Islands, would afford a far more convincing proof of our being now superior to the lust for territory, and of our wish to see every people ruled by a government of its own choice, than thousands of protestations.

But supposing separation to follow, what would be the course of

events? Most of the holders of movable property would, it is likely, before the day of separation arrived, remove that property elsewhere ; but the owners of land would probably, for a time, derive from their Irish estate i little or no rent. Meanwhile, sharp distress would begin to arise, and the question of government Would have to be settled, a question that would admit of only two soltitions—a native government, or one by foreigners. If foreign, what country? The answer is plain—France or the United States. But would either of those accept the office? Not the present sagacious ruler of France, we may feel assured, whatever might be the feeling in America. But of one thing there can be no doubt, that the connection, if formed, instead of being an increase of wealth and power, would be a source of poverty and weakness,

though, as it would not be begun in crime, it might not prove the almost unmitigated curse it has been to us.

If, however, Ireland under foreign rule should, in truth, become prosperous and happy, there is, in my opinion, no reason why England ahould not rejoice at the change, or why we should be apprehensive of disturbance to our own peace. For fifty years we have had no war with a powerful neighbour nearer to us than Ireland, nor, for the same time, have we been at war with those who, on the borders of Canada, come into still closer contact with us, while any attack from Ireland would have to be carried on at a distance from the centre of operation and at an immense expense, and on a people better prepared than ever to resist aggression.

Sooner or later, we may be sure, any foreign country that might undertake the task of governing Ireland would become weary of the trouble and cost, and would throw it up ; and thus the Irish would be driven to try their own hands at government. But does any one believe, for a moment, that, whatever form they might adopt, they would, in their present state of ignorance and want of power of combination and self-control, succeed ? He who does must be of a very sanguine temperament. But if anarchy and misery ensue, as they assuredly would, what next would follow ? A gradually formeil but at length general and earnest desire to renew the old connection ; and if the people of this country should be satisfied that, after the dearly bought but, I fear, neces- sary experience, the Union could again be renewed without the constant harassment to which we are now exposed, they would, no doubt, cheerfully receive the Irish back, and be prepared, with them, to turn over a new page of history, and to bury the past in eternal oblivion.—I am, Sir, your obedient servant,

[We publish this letter, with every sentence of which we dis- agree heartily, as a political curiosity. There is, then, one Englishman familiar with politics who would repeal the Union.— En. Spectator.]