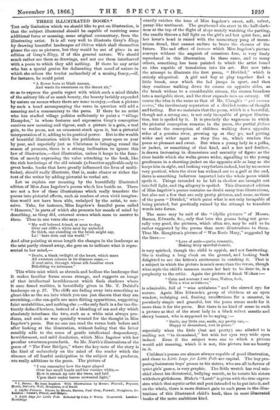 Page 19, 10 November 1866 — THREE ILLUSTRATED BOOKS.* Tax only limitation -which we should like
Close

THREE ILLUSTRATED BOOKS.* Tax only limitation -which we should like

to put on illustration, is that the subject illustrated should be capable of receiving some additional force or meaning, some original commentary, from the illustrating artist. It. is -all very well to illustrate Gray's Elegy by drawing beautiful landscapes ad libitum which shall themselves please the eye as pictures, but they would be out of place in an edition of Gray's Elegy, if of this general nature. We should much rather see them as drawings, and not see them interleaved 'With a poem to which they add nothing. If there be any artist who has a special genius for delineating that mood of nature in which she echoes the tender melancholy of a musing fancy,—if, for instance, he could paint

"A flower born to blush unseen,

And waste its sweetness on the desert air,"

sb as to express the gentle regret with which such a mind thinks of the solitary life of so much beauty, the bounty-lavishly expended by nature on' scenes where there are none to enjoy,—then a picture by such a hand accompanying the verse in question will add a meaning and a commentary to the- poem. If there be an artist who has studied village politics sufficiently to paint a "village Hampden," in whose features and expreseion Gray's conception receives new meaning and vigour, such a -picture -is a-gain, a-real gain, to the poem, not an ornament stuck upon it, but apietorial interpretation of it, adding to its poetical power. But in the wealth of beautiful illustration which the publishers press upon us year by year, and especially just as Christmas is bringing round the season of presents, there is a strong inclination to ignore this law of illustration,—that illustration, unless it keeps to the func- tion of merely expressing the value attaching to the book, like the rich borderings of the old missals (a function applicable only to -great books, books that have greatly influenced the lives of multi- tudes), should really illustrate, that is, make clearer or richer the :text of the writer by adding pictorial to verbal art.

Let us explain our meaning by the beautifully illustrated 'edition of Miss Jean Ingelow's poems which lies beside us. There are not a few of these illustrations -which really translate the poems into pictorial effects, such 01 readers of even vivid imagina- tion would not have been able, unhelped by the artist, to con- ceive. Take, for instance, Miss. Ingelow's fanciful poem called "Honour;" in parts of which she presents her moods of mind by describing, as Gray did, external scenes which seem to answer to them. Thus in one verse she says:—

"My well beloved friend, at noon to-day, Over our cliffs a white mist lay unfurled So thick, one standing on the brink might say, Lo! 'here cloth end the world.'" And after painting at some length the changes in the landscape as the mist partly cleared away, she goes on to indicate what it repre- sented to her mind,— "Doubt, a blank twilight of the heart, which mars All sweetest colours in its dimness same,— A' soul-mist, through whose rift familiar stars Beholding we misname."

This white mist which so shrouds and bedims the landscape that it makes familiar forms seems strange, and suggests an image of that intellectual bewilderment which finds shadows where it once found realities, is beautifully given in Mr. T. Dalziel's landscape on p. 27. The cliffs are fading away into something as ghost-like as the sea into which you can just discern that they are stretching,—the sea-gulls are mere flitting apparitions, suggesting faint mutabilities, and nothing else ;—tie only fault is a far too dis- tinctly defined horizon, instead of a blending of sea and sky which absolutely interfuses the two, such as a white mist always pro- duces, and such as was -specially wanted for the thought in Miss Ingelow's poem. But no one can read the verses both before and after looking at the illustration, without feeling that the latter sensibly adds to the sense of gentle intellectual despondency, bewilderment, and mild desolation, which Miss Ingelow with her peculiar sweetness pours forth. So Mr. North's illustrations of the poem of "The Four Bridges," where the key-note of the story is the -kind of melancholy on the mind of the reader which the • absence of all fearful anticipation in the subject of it, produces, .stre really additions to the poem. The picture of

"I can remember how the taper played Over her small hands and her vesture white,— How- it struck up into the trees, and laid Upon their under leaves unwonted light," 1. Poems. --Be Jaan-lugelow. With Iileitrations by Messrs. Pinwell, Poynter, -North, Dalziels, Wolf, Houghton, and Small.

3. Guile Lays for Little Folk. Selected by John S. Watts. Illustrated. Loudon : .11uutledge exactly catches the tone of Miss Ingelow's sweet, soft, velvet, pansy-like Sentiment. The greyhound sits erect in the half-dark- ness at the top of the flight of steps mutely watching the parting, the candle throws a full light on the girl's sad but quiet face, and her lover's head is raised with the momentary pang of uncon- scious dread, that cannot endure to brave the chance.s of ' the future. The sad effect of lastness which Miss Iugelow's picture conveys without the anguish of conscious fear, is very finely reproduced in 'this illustration. In these cases, and in many others, something has been painted in which the artist found an idea capable of translation into his art. But now take the attempt to illustrate the first poem, "Divided," which is strictly allegorical. A girl and boy at play together find a little brook, over which the lad jumps in sport, and then they continue walking down its course on opposite sides, as the brook widens to a considerable stream, the stream broadens into a navigable river, and the river expands into an estuary. Of course the idea is the same as that of Mr. Clough.'s "qua eursunt ventus," the involuntary separation of a divided course of thought and feeling. But we maintain that the poem, Which is a beautiful, though not a strong one, is not only incapable of proper illustra- tion, -but is spoiled by it. It is precisely the vagueness in which the pictorial conception remains in the poem, the partial failure to realize the conception of children walking down opposite sides of a genuine river, growing up as they go, - and getting wider and wider apart as they live on, which -renders the poem so pleasant and sweet. But 'when a young lady in a polka, or jacket, or something of that kind, and a hat and ferather, is drawn increasing in dimensions and maturity of figure as the river beside which she walks grows wider, signalling to the young gentleman in a shooting-jacket on the opposite side as long as she keeps him in sight, and looking very forlorn indeed, but by no means very poetical, when the river has widened out to a gulf at the end, there is something ludicrous imported into the whole poem which spoils it. Things intended to be left in shadow are brought out into full light, and the allegory is spoiled. This illustrated edition of Miss Ingelow's poems contains no d.ciubt many true illustrations, but also not a few that are only pretty pictures, and some, as those of the poem "Divided," which paint what is not only incapable of being painted, but poetically ruined by the attempt to translate words into forms.

The same may be said of the "idyllic pictures" of Messrs. Barnes, Edwards, &c., only that hero the poems being not gene- rally very good, the pictures, which often are, may be said to be rather suggested by the poems than mere illustrations to them. Thus Mr. Houghton's picture of "Wee Rosie Mary" suggested by the lines :—

"Love of antic—garbs romantic, Making kitty sportful-frantic, is very spirited, though the child is 'uppish, And not fascinating. She is trailing a long cloak on the ground, and looking back delighted to see the kitten's excitement in catching it. That is a subject in which the picture is much more than the verses, though what style the child's mamma means her hair to be done-in, is a perplexity to the critic. Again the picture of Izaak Walton:— " Calm and content I see thee, Waltion, took, With a wise 'artfulness,"

is admirable, full of " wise artfulness" and the shrewd eye for nature. Again Mks Edwards's group of children at an open -window, indulging sad, fleeting recollections fer a memeut, is peculiarly simple and graceful, but the poem seems made for it more than it for the poem. But there ism() kind of sense in such a picture as that of the stout lady in a black releet mantle and showy bonnet, who is supposed to be saying :—

" Smile, my little one, smile, my pretty one,— Happy in dreamland, rest in peace."

especially when the little (but not pretty) one alluded to is smiling not "In dreamland," but with her eyes very wide open indeed. Even if the subject were one to which a picture would add meaning, which it is not, this ,picture has no beauty in it.

Children's poems are almost always-capable of good illustration, and those to Link Lays for Little Folk-are capital. The boy pro- posing boisterous boys' games to his sisters, who are all in favour of quiet girls' games, is very graphic. The little wretch -has real mis- chief about his dictatorial, bullying mouth, as he taunts his sisters with their girlishness. Blake's "Lamb" is giten with the true expres- sion which that mystic artist and poet intended to be put into it, and on the whole, there is more distinct gain to each.peem in the illus- trations of this illustrateAl child's book, than in most alustrated books of the more ambitions kind.